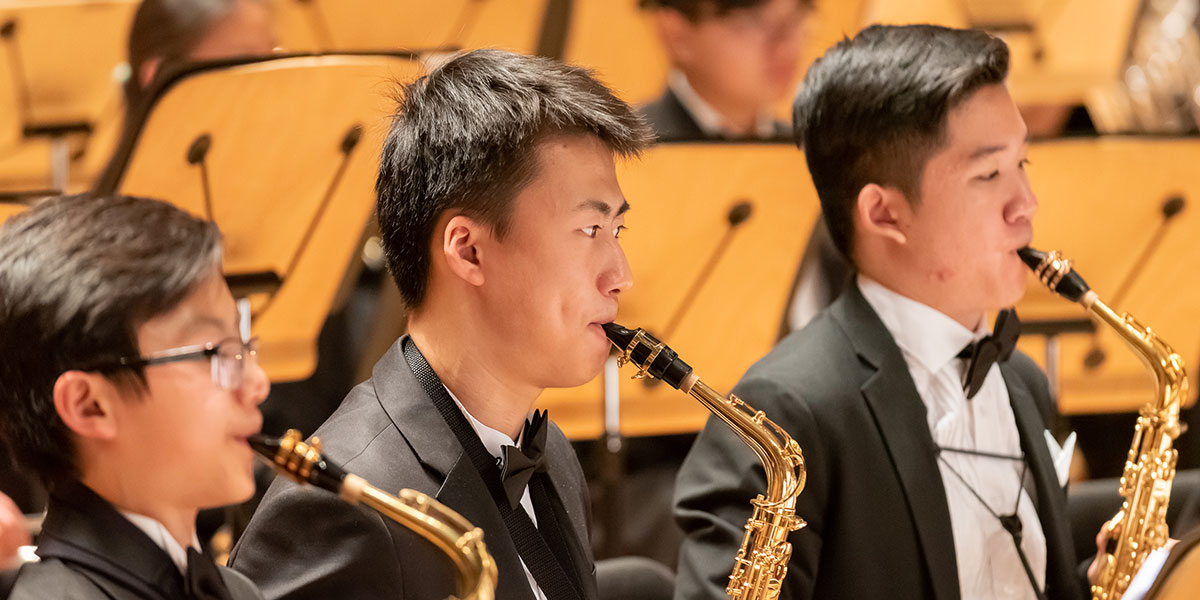 Established in 2007, Pacific Symphony Youth Wind Ensemble (PSYWE) started under the direction of Michael J. Corrigan, the well-known music educator and recipient of the “Band Educator of the Year” award from the California Music Educators Association, with support from Larry Woody and the Woody Youth Fund. In 2009, Joshua Roach, of the Thornton School of Music at USC, was appointed music director. Under Roach’s direction and unique enthusiasm, and with the artistic direction of Pacific Symphony’s renowned music director, Carl St.Clair, PSYWE quickly became the premier Youth Wind Ensemble in Orange County. Current Music Director Dr. Gregory X. Whitmore’s inaugural season started in 2014-15, and under Dr. Whitmore’s visionary guidance, PSYWE has undertaken commissions and world premieres of new works, and continues to explore new music initiatives.
In 2016-17, PSYWE celebrated its 10th anniversary season, culminating in a tour to Salzburg and to the Summa Cum Laude International Youth Music Festival in Vienna, Austria, where PSYWE took first prize in its category, with performances in the Golden Hall of the Musikverein, the MuTh Concert Hall, and Vienna’s legendary Konzerthaus.
Representing 30 schools in the SoCal region, PSYWE offers performance opportunities to instrumentalists in grades 9-12 and is one of four Youth Ensemble programs offered by Pacific Symphony. PSYWE provides members with a high quality and innovative artistic experience and strives to encourage musical and personal growth through the art of performance. Each season students enjoy an interaction with Maestro Carl St.Clair, as well as regular interactions with guest artists and professional musicians of Pacific Symphony. Students also engage in an annual weekend retreat and are offered free and discounted tickets to Pacific Symphony performances throughout the season.
During the season, PSYWE presents a three-concert series. Performances are presented at the Renée and Henry Segerstrom Concert Hall at the Segerstrom Center for the Arts as well as other high-quality community venues in Orange County.

The season starts in August and ends in May each year. Members are selected through annual auditions.
Auditions
Meet the PSYWE Conductor
Meet the PSYWE
Participating PSYWE Schools