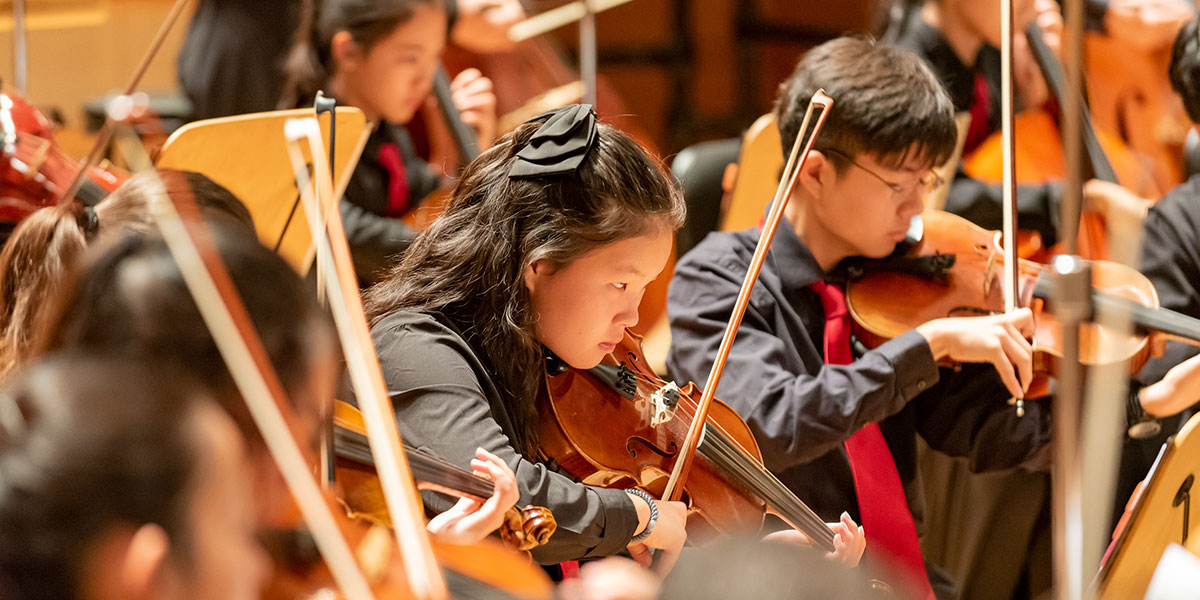 Now in their 31st season, Pacific Symphony Santiago Strings (PSSS) has become a premier youth string orchestra, recognized both regionally and nationally. Sponsored by The Orange County Chapter of the Suzuki Music Association of California/Los Angeles Branch, PSSS was founded by Lonie Bosserman and Margie Chan in 1991, and was known as the Santiago Strings Youth Orchestra before joining the Pacific Symphony family in 2007. Led by gifted muscian and educator Dr. Johanna Gamboa-Kroesen, PSSS also benefits from the artistic guidance of Pacific Symphony Music Director Carl St.Clair.
Representing 41 schools in the SoCal region, PSSS provides an experience that nurtures the confidence, poise, and musical sensitivity of young musicians through the study and performance of outstanding string orchestra literature. PSSS serves instrumentalists in grades 6 through 9 and is one of four Youth Ensemble programs offered by Pacific Symphony. Each season, students enjoy an interaction with Maestro Carl St.Clair, as well as interactions with guest artists and professional musicians of Pacific Symphony. Students also engage in an annual weekend retreat and are offered free and discounted tickets to Pacific Symphony performances throughout the season.
During the season, PSSS presents a two-concert series and participates in the Orange County Suzuki Festival. Performances commence at the Renée and Henry Segerstrom Concert Hall at the Segerstrom Center for the Arts as well as other high-quality community venues in Orange County. The opening season performance features a joint program with the Prelude Chamber Strings. In its 25th anniversary year, PSSS was invited to participate in the National Orchestra Festival in Tampa, Florida as part of the American String Teachers Association (ASTA) annual conference. In its 2017-18 season, and under the guidance of Pacific Symphony Music Director Carl St.Clair, PSSS embarked on a musical and cultural exchange tour of Costa Rica, engaging in workshops and giving concerts in the cities of Cartago, San Ramón and the capital city of San José.
The season starts in August and ends in May each year. Members are selected through annual auditions.