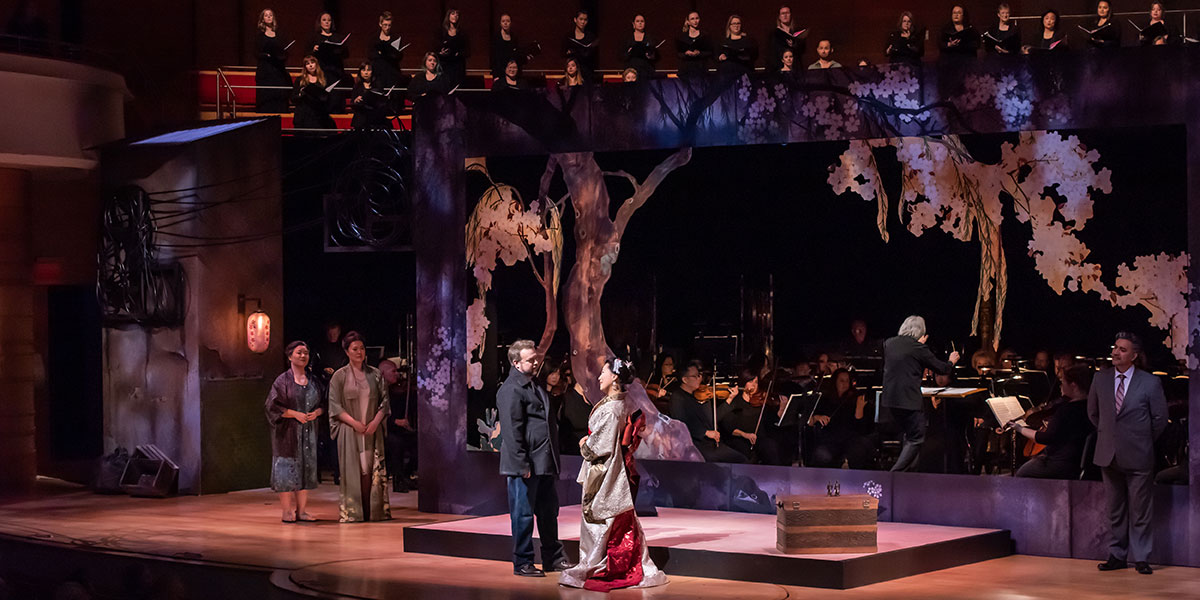 Beginning in the 2011-12 season, Pacific Symphony undertook a major Opera and Vocal Initiative in an effort to restore local, professional productions of this irreplaceable art form to Orange County—one opera at a time.

"Orange County lost a jewel when Opera Pacific closed its doors," says Symphony President John Forsyte. "We don't intend to replace this fine company, but serve music lovers with semi-staged opera, which is a unique concert experience; it combines the power of a full symphony on stage with the singers and some of the theatrical drama so important to conveying opera's ultimate power.” 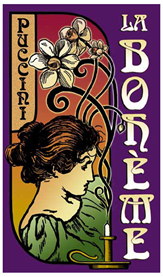 Masterminding the effort is Music Director Carl St.Clair, whose stellar reputation as an opera conductor in Europe sets the ideal stage for such a venture. St.Clair recently concluded his tenure as general music director and chief conductor of the German National Theater and Staatskapelle (GNTS) in Weimar, Germany, where he led Wagner's “Ring Cycle” to great critical acclaim. He has also served as general music director of the Komische Oper Berlin.

The Symphony began by presenting one of Puccini's most popular and heartbreaking operas, “La Bohème,” in a semi-staged production over three glorious nights (April 19, 21 & 24, 2012). Carefree Bohemians and star-struck lovers; penniless, hungry and ill fill the concert stage with their astonishing voices as Puccini's sad tale unfolds—assisted by stage director A. Scott Perry, the Pacific Chorale and the Southern California Children's Chorus. Also on the schedule in 2012 were two semi-staged performances of “Hansel and Gretel,” adapted for children, as part of the Family Musical Mornings series (March 3, 2012). 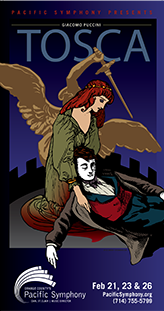 In the 2012-13 season, Pacific Symphony brought to life the tragic Puccini opera “Tosca” with Claire Rutter, Brian Jagde and George Gagnidze in the starring roles (April 21, 23 and 26, 2013). The stunning semi-staged production under the art direction of Eric Einhorn amazed the sold-out audience with video projections on a semi-circular screen behind the orchestra creating a unique experience. "St.Clair and the Pacific Symphony once again dominated the evening, bringing Puccini’s orchestrations up front in fully upholstered luxury," as Richard S. Ginell put it in the Los Angeles Times.

Alejandro Gutiérrez made his conducting debut with Pacific Symphony as assistant conductor with two performances of “The Magic Flute” (Jan. 12, 2013). With the hard work and dedication of Pacific Symphony’s Family Musical Mornings team, as well as the wonderful collaboration with both Chapman University and Long Beach Opera, the modified version of Mozart's opera delighted children and adults alike.

The Opera and Vocal initiative continued in 2013-14 with Pacific Symphony’s Classical Series production of Verdi's “La Traviata” (Feb. 20-25, 2014). This beautiful and sad tale of love and death has entranced audiences for centuries and formed the basis for many adaptions—including the 2001 blockbuster “Moulin Rouge.” Family Musical Mornings audiences also experienced another fabulous opera adaption—a modified version of Donizetti's comic gem “Elixir of Love” (Jan. 11, 2014). 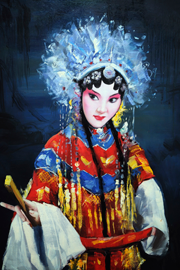 The 2015-16 season saw performances of “Turandot” (Feb. 18-23, 2016), Puccini's spectacular masterpiece about a bloodthirsty princess whose icy, vengeful heart softens as she comes to know true love, as well as a family-friendly version of Gilbert & Sullivan's “Pirates of Penzance” (Feb. 6, 2016), once again in cooperation with Chapman University.

The 2017-18 season featured Mozart's enchanting “The Magic Flute" (Feb. 22, 24 and 27, 2018), led by Maestro St.Clair, directed by Robert Neu. The characters in this fairy-tale opera were dramatically accompanied on stage by more-than-life-size pupppets, designed by Robin Walsh. Assistant Conductor Roger Kalia conducted a child-friendly adaptation of “Fledermaus - The Bat-Man's Revenge” by Strauss Jr. as part of the Family Musical Mornings series (Feb. 3, 2018). 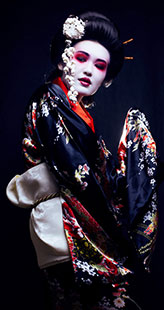 The 2018-19 season included two operas included two semi-staged opera productions, starting with Puccini's “Madame Butterfly,” the heartbreaking tale of a young naïve Japanese geisha who believes that her love for a handsome American naval officer is eternal. Eric Einhorn was once again the stage director, returning after his masterful work on “Tosca” and “Turandot.” This was following on May 16-18, 2019 by Ravel's charming one-act opera, “L'enfant et les sortilèges” (“The Child and the Spells”). The Family Musical Mornings Series presented a child-friendly production of Mozart's "The Magic Flute," once again in collaboration with Chapman University.

In the 2019-20 season, Associate Conductor Roger Kalia leads the audience through the twists and turns of Donizetti’s comic opera for a morning of magical music at “Opera for Kids: Elixir of Love” (Jan. 18, 2020). The Symphony's production of Verdi's “Rigoletto," scheduled for April 2020, had to be cancelled due to the coronavirus pandemic.

In the 2021-22 season, opera returns once again with Verdi's Otello.

To find out more about the Opera and Vocal Initiative or to support this major undertaking, please contact Senior Executive for Special Campaigns & Major Gifts Gary Good at (714) 876-2360 or ggood@pacificsymphony.org. 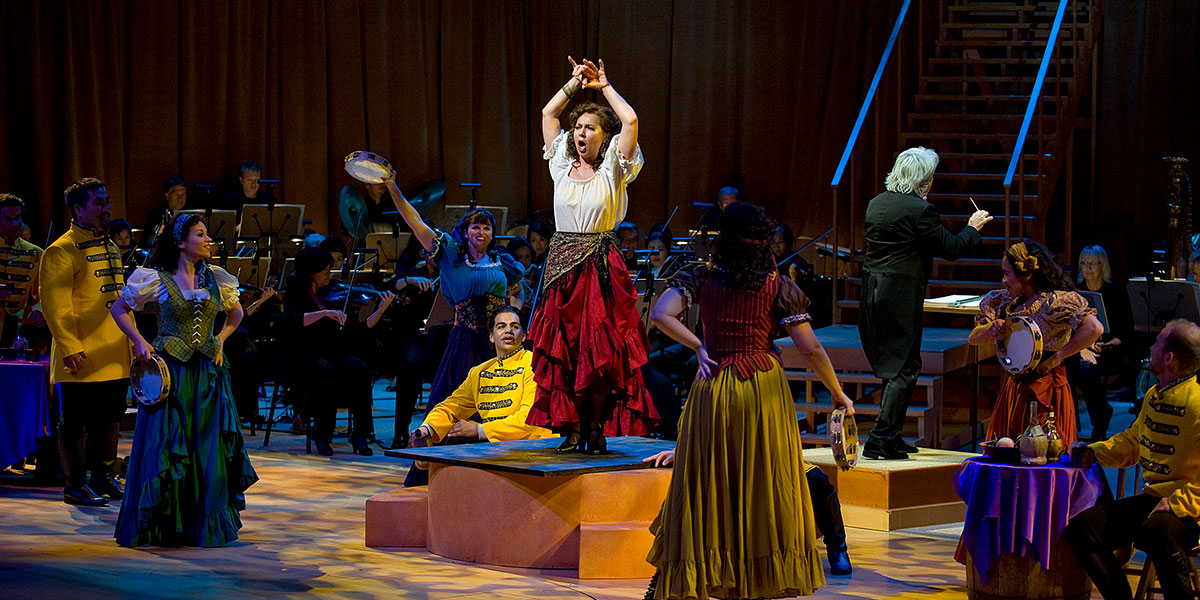