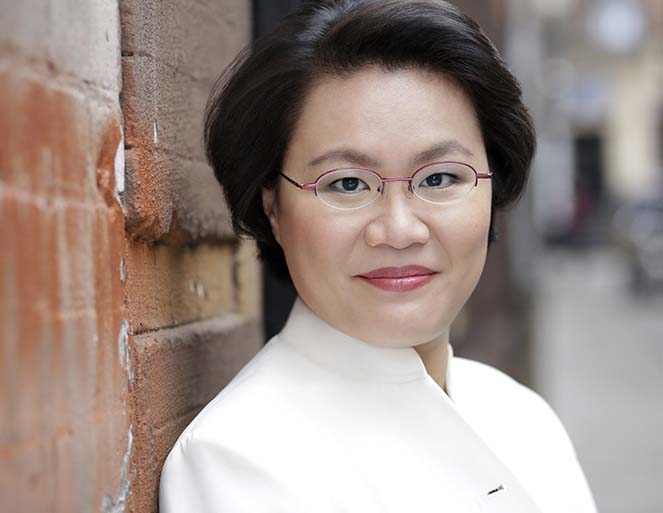 Praised for her dynamic, passionate conducting style, Taiwanese-American conductor Mei-Ann Chen is acclaimed for infusing orchestras with energy, enthusiasm and high-level music-making, galvanizing audiences and communities alike. Appointed Music Director of the MacArthur Award-winning Chicago Sinfonietta in 2011, Ms. Chen’s contract has been extended through the 2020-2021 season. She also serves as Artistic Director & Conductor for the National Taiwan Symphony Orchestra Summer Festival, a post she has held since 2016. Highly regarded as a compelling communicator and an innovative leader both on and off the podium, and a sought-after guest conductor, she continues to expand her relationships with orchestras worldwide.

As Music Director of Chicago Sinfonietta, Ms. Chen has made two recordings for Cedille Records: "Project W - Works by Diverse Women Composers", featuring the world-premiere recordings of newly commissioned American works by Jennifer Higdon, Clarice Assad, Jessie Montgomery, and Reena Esmail, and the world premiere of William Grant Still’s orchestral arrangement of Florence Price’s Dances in the Canebrakes (March 2019); and "Delights and Dances" featuring world premieres by Michael Abels, An-Lun Huang, and Randall Craig Fleischer's arrangement of Bernstein's West Side Story Concerto for String Quartet and Orchestra, feathuring the Harlem String Quartet, and Benjamin Lees' Concerto for String Quartet and Orchestra (June 2013). This past November 2018, Innova Records released River Oaks Chamber Orchestra's debut album "ROCO: Visions Take Flight", praised by artsfuse.org as "one of those rarest of accomplishments: a contemporary music album that’s a sheer joy to listen to, from start to finish." Ms. Chen a frequent guest conductor with the orchestra, conducts the CD, which features the world premiere recordings of five of the orchestra's commissioned works.

Recognized as someone who has redefined the orchestra experience, amongst Ms. Chen’s honors and awards are being named one of the 2015 Top 30 Influencers by Musical America, (the bible of the performing arts industry); a 2012 Helen M. Thompson Award from the League of American Orchestras; Winner, the 2007 Taki Concordia Fellowship; and First Prize Winner, the prestigious Malko Competition in 2005. Ms. Chen is the recipient of several ASCAP awards for innovative programming during her tenure as the Music Director of Chicago Sinfonietta & Portland Youth Philharmonic in Oregon (2002 – 2007). Ms. Chen is also Conductor Laureate of the Memphis Symphony Orchestra, having served as Music Director from 2010 to 2016.

Born in Taiwan, Mei-Ann Chen came to the United States to study violin in 1989 and became the first student in New England Conservatory’s history to receive master’s degrees simultaneously in both violin and conducting. She later studied with Kenneth Kiesler at the University of Michigan, where she earned a Doctor of Musical Arts degree in conducting. Ms. Chen participated in the National Conductor Preview, National Conducting Institute, Aspen American Academy of Conducting, and Pierre Monteux School.