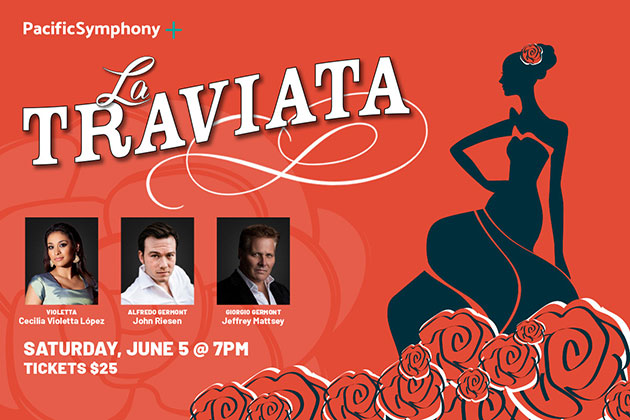 The goal is to produce an opera that is Covid-safe for the cast and orchestra, and can be viewed as an on-line film by its audience.  The restrictions (I mean, challenges) are these:

So began my phone call with Carl St.Clair and Eileen Jeanette last winter. Normally, my first reaction to this would have been, "Hmmmm . . . "  But I'm a freelance stage director who hasn't worked since March 2020 when the Covid pandemic was responsible for the cancellation of every one of my contracts for the foreseeable future. So my response, instead, was, "Absolutely! Great! Let's do this!"  Truth be told, any time I get an offer from Eileen or Carl my answer is always going to be an enthusiastic and positive one—since there have never been greater collaborators, and Pacific Symphony is such a great orchestra. But this, indeed, was a daunting assignment.

It didn't take long for us to settle on "La Traviata." One of the greatest operas in the repertoire, it has audience appeal, it's relatively short (around two-and-a-half hours including intermission), it doesn't depend on spectacle, and there are only three central characters. While the "Traviata" choruses are exciting, we knew they could be cut without harming the story. We also knew that the story is essentially a psychological one that doesn't require big scenic effects or tragic battle scenes or complicated secondary plots. "Traviata" is, in fact, one of the most economical operas in the canon —and one of the most beautiful and moving. Perfect!

I was then left with the central question: How do you stage an opera that's a love story without the characters making any physical contact? If you approach the piece traditionally, with blocking that is "true to life," it will start to look silly very quickly. You can't give something a visual life that is literal but then change the rules halfway through. In other words, you can't have the audience constantly asking themselves, "But why aren't they kissing? Why are they standing so far apart while they're singing a love duet?" You would be distracted, you would be taken out of the world of the opera. So instead, what you will experience is something that capitalizes on the psychological journey of these three fascinating characters. You will see each character relive his/her tragic past is his/her own mind. Now, this sort of interior story-telling isn't compelling unless you have superb actors. And in this production, I couldn't be more confident about that: This is a real "A-Team" of fantastic singer-actors. Having worked extensively with all of them in other productions, I know what they can do and I know they will offer moving and stirring portrayals. We also have the advantage of a video format wherein we can have close-ups and shots from different angles. All of this will offer you a production of "La Traviata" that will be fresh and interesting to even the most experienced opera-goer.

So thank you, Carl, Eileen and the Pacific Symphony for posing these necessary health-related challenges. It's really an example of how hurdles can create inspiration and energy. We hope you love our "Traviata"!