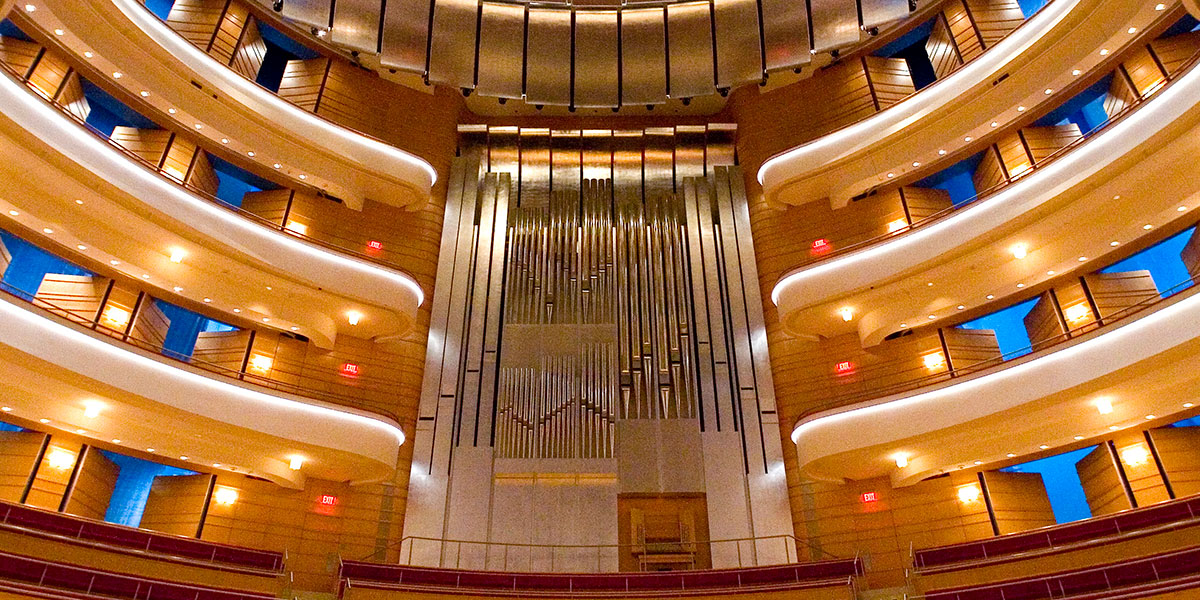 The William J. Gillespie Organ at a glance: 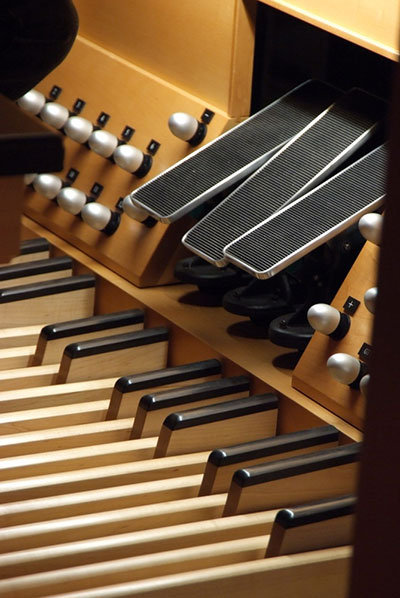 The William J. Gillespie Concert Organ (C.B. Fisk Opus 130) was designed and built by C. B. Fisk, Inc. of Gloucester, Massachusetts. It is 40 feet wide, 48 feet high and 12 feet deep. The organ contains 4,322 pipes. The front pipes extend 32 feet in height and are finished in aluminum-leafed wood or polished tin. The entire instrument weighs 30 tons.

There are 75 stops, including 57 individual voices and 75 ranks. The console includes four manual keyboards of 61 notes each (CC-c4), naturals of cow bone, sharps of ebony. The pedal keyboard has 32 notes (CC-g1), naturals of maple, sharps of ebony. It contains five divisions, the Great, Swell, Positive and Pedal divisions form the basis of the classical organ.  The Solo division is on higher wind pressure and is specifically suited for providing the musical climax in the repertoire for organ and orchestra.

The organ utilizes Tracker key action, a direct mechanical link between the keyboard and the valves controlling the wind to the pipes.  A Kowalyshyn Servopneumatic Lever may be engaged allowing the player to maintain effortless control when playing several of the divisions of the instrument at the same time. The KSPL also allows for the inclusion of an Octaves graves coupler Stop action is electrically controlled, with solid state combination action for preset registrations. There are multiple pistons, toestuds and reversibles for ease of use, as well as multiple levels of memory and a sequencer.

The organ is winded by electric blowers totaling 14 horsepower, providing pressures from 4” to 18” water column.

Listen to Fred Swann perform on the Gillespie Concert Organ:

C. B. Fisk, Inc. was founded in Gloucester, Massachusetts, by the late Charles B. Fisk. A man of many interests and talents, he chose organbuilding as the profession to combine his extraordinary aptitude in physics with his lifelong love of music. He apprenticed with Walter Holtkamp, Sr., in Cleveland, Ohio, then went on to become a partner and later sole owner of the Andover Organ Company. In 1961 he left to establish C. B. Fisk near his childhood summer home on Cape Ann.

The workshop attracted bright young co-workers who combined their talents in music, art, engineering, and cabinet making to build organs that redefined modern American organbuilding. Always experimenting, C. B. Fisk was the first modern American organbuilder to abandon the electro-pneumatic action of the early twentieth century and return to the mechanical (tracker) key and stop action of historical European and early American instruments.

The Fisk firm went on to construct the largest four-manual mechanical action instruments built in America in this century, first at Harvard University in 1967, then again at House of Hope Church in St. Paul, Minnesota, in 1979. The firm has also built a number of instruments based on historical organs, among them one at Wellesley College, patterned after North German organs of the early 17th century, one at the University of Michigan in the manner of the Saxon builder, Gottfried Silbermann, and a three-manual instrument at Oberlin College modeled on the work of the 19th century French master builder Aristide Cavaillé Coll. The large four-manual dual-temperament instrument at Stanford University used modern technology to combine many different aspects of historical organ styles. Recent organs at the Meyerson Symphony Center in Dallas, the Minato Mirai Concert Hall in Yokohama, and Benaroya Hall in Seattle, were designed for maximum impact with orchestra as well as for solo repertoire. In 2003 C. B. Fisk built an organ for the Cathedral in Lausanne, Switzerland, the first American organ to be made for a European cathedral.

C. B. Fisk still combines the science of physics and the art of music as practiced by Charles Fisk. Fisk saw himself as a teacher and tirelessly shared his insight and experience with others. His style of leadership, modeled after the team of scientists he worked with on the Manhattan Project, involved his co-workers in the day-to-day decisions about the concepts and construction of the instruments. The same people who were drawn by Charles Fisk’s bold ideas carry on his work and share their insight and experience with another generation of organbuilders. This dedicated community of workers continues to use its talent and imagination to stretch the boundaries of organbuilding, producing instruments that add to the rich heritage of the King of Instruments. 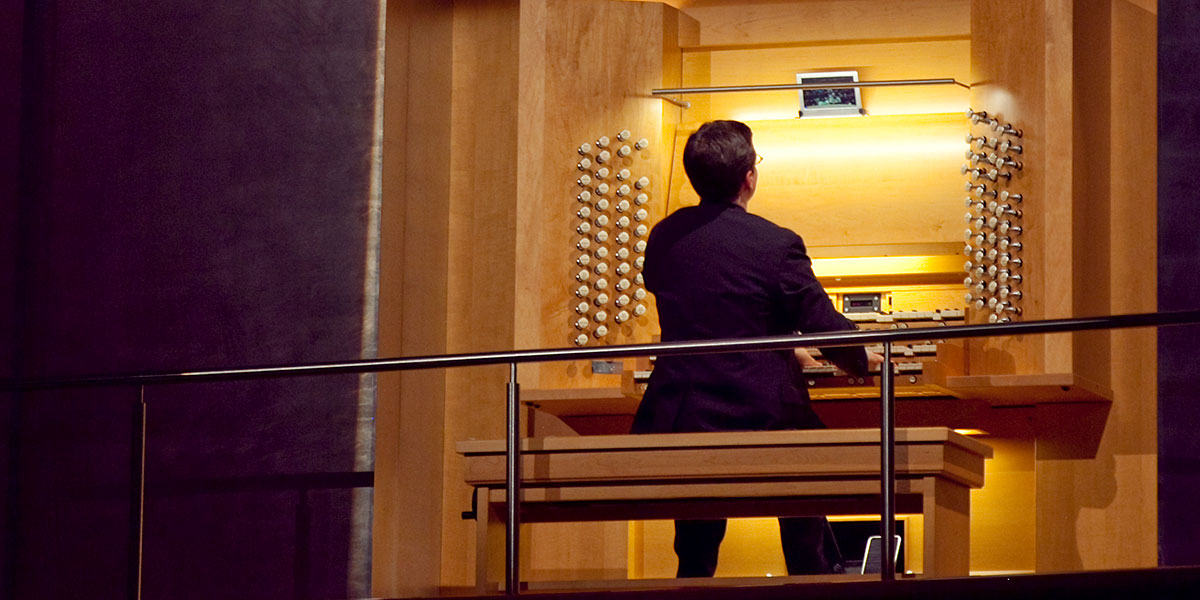