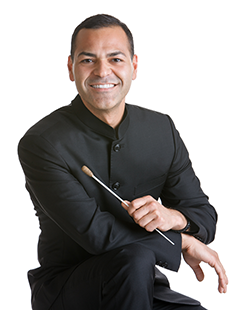 Dr. Jacob Sustaita is the newly appointed assistant conductor of Pacific Symphony. Since 2015, he served as director of orchestral studies at Sam Houston State University. At Sam Houston State, he was responsible for conducting the symphony, chamber, ballet and opera orchestras. In 2016, Sustaita and the orchestra performed the American premiere of Anton Bruckner’s Symphony No. 1 (original Linz version) with high praise from the American and European Bruckner Societies.

In 2018 Sustaita was named associate conductor of the Conroe Symphony Orchestra, and in May 2019, he became the orchestra’s fourth music director. He is a frequent guest conductor and clinician across the country, and he recently made his debut conducting the Juilliard Orchestra. During the 2016-2017 season, Sustaita made his debut with the BlueWater Chamber Orchestra in Cleveland, Ohio, and made his debut as cover conductor with the Houston Symphony, assisting David Zinman. In 2015, Sustaita was selected by Carnegie Hall’s Weill Institute to serve as assistant conductor for Charles Dutoit and the National Youth Orchestra of America. Sustaita regularly conducted and coached the orchestra during its New York residency and on their seven-city tour of China and Hong Kong.

Music education has always been at the forefront of his conducting interests. He regularly conducts the Linked Up Concerts created by Carnegie Hall, and he continues to develop innovative platforms for youth and family concerts that provide a meaningful and exciting experience for all concertgoers. In addition to his responsibilities with the Conroe Symphony Orchestra and Sam Houston State Orchestra, he has conducted youth and collegiate orchestras including the Houston Youth Orchestra Symphony and Philharmonia, Akron Youth Orchestra, Cleveland Orchestra Youth Orchestra, and multiple All-Region orchestras. He is also a regular presenter at conventions and for teacher in-service and development workshops.

A native of Texas, Sustaita completed his doctorate degree at the University of Houston, where he served as assistant conductor and guest music director for the Moores Opera Center for three seasons. He holds a bachelor of music degree from the University of Houston and a master of music degree from both Penn State and Rice University. His honors include: Schissler Conducting Fellowship, Rice University Prize and Provost Fellowship and American Prize semi-finalist and finalist. His teachers and mentors include Charles Dutoit, Franz Krager, Brett Mitchell, Gerardo Edelstein, and Paavo Järvi.