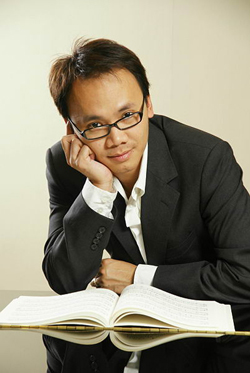 Prangcharoen has, thus, established an international reputation and is recognized as one of Asia’s leading composers. He has received encouragement and praise from a number of important contemporary composers, such as Paul Chihara, Zhou Long, Augusta Read Thomas and Yehudi Wyner. John Corigliano has called Prangcharoen’s music “contemporary and accessible,” and Chen Yi has written that it is “colorful and powerful.”

The press has also recognized Prangcharoen’s uniqueness as a composer. The Chicago Sun Times called his music “absolutely captivating,” and, of the October 2012 Carnegie Hall debut by the American Composers Orchestra of “Migrations of Lost Souls,” The New York Times critic, Corinna da Fonseca-Wollheim wrote, it is “an atmospheric work that weaves some of the spiritual and vernacular sounds of Mr. Prangcharoen’s native Thailand into a skillfully orchestrated tapestry [with] moments of ethereal beauty.”

Prangcharoen received his D.M.A. from the University of Missouri-Kansas City, where his primary teacher was Chen Yi. In addition to working as a freelance composer, he is currently teaching at the Community Music and Dance Academy of the Conservatory of Music, University of Missouri in Kansas City. He is the founder of the Thailand International Composition Festival, now entering its 10th year. His works are published exclusively by Theodore Presser Company.