Enjoy virtual Symphony Mixers and intimate Coffee & Conversations. Grab a beverage of your choice, tune in and connect with fellow music lovers! 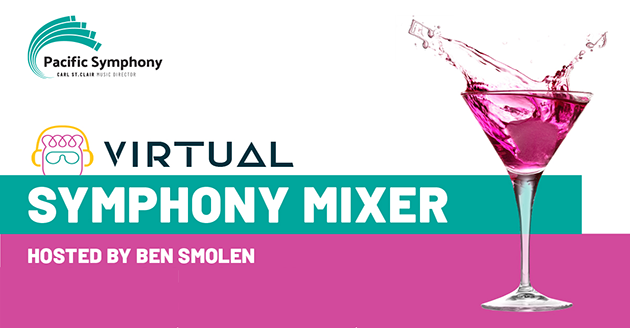 Symphony Mixers are open to Symphony subscribers and donors, and are hosted weekly by Concertmaster Dennis Kim or Ben Smolen, principal flute of Pacific Symphony. Recordings of each Mixer will be posted here in the week after the event.

Pacific Chorale Artistic Director Rob Istad joins Concertmaster Dennis Kim for a fascinating conversation about our organization's long-standing artistic partnership, how the Chorale has been staying virtually active, and how California arts organizations can rebuild after concerts start again.

"The Pacific Symphony is one of two organizations in the U.S. that I consider to be the foundation of touring companies in the U.S.. One is Pacific Symphony in Orange County, and the other is the Kennedy Center in Washington. Those are the book-ends of any touring season for any touring company." Join us as we welcome American Ballet Theatre leaders David LaMarche, Ormsby Wilkins and Charles Barker.

Three of our newest Symphony violinists join us for this in-depth discussion with Concertmaster Dennis Kim on what it takes to play for Pacific Symphony, musical upbringings, staying artistically active during quarantine, and some of their shared experiences in the orchestra.

Rune Bergmann is the Calgary Philharmonic Music Director and Artistic Director and Principal Conductor of the Szczecin Philharmonic in Poland. An energetic and compelling figure on the podium, Norwegian conductor Rune Bergmann is a dynamic, versatile conductor with an extensive classical, romantic, operatic and contemporary repertoire. Considered among today’s most talented young Scandinavian conductors, his elegant interpretations and reputation as an inspiring and profound musician continue to attract the attention of orchestras throughout the world.

Joe Bein of Bein & Co. has been in the violin business for his entire life, ushered in by his father's legendary Chicago violin store, Bein & Fushi. Together, he and Concertmaster Dennis Kim discuss Stradivarius violins: their legacy, their sound, and their impact on musical history.

Concertmaster Dennis Kim takes over this week's Mixer with two very special guests from his musical past and present: Alexander Kerr, concertmaster of the Dallas Symphony Orchestra, and Steven Copes, concertmaster of the Saint Paul Chamber Orchestra. The three discuss their musical education, swap concertmasters (horror)stories, and give some advice to young musicians looking to break into the classical music scene.

Ben met with accomplished pianist and friend of the Symphony Alexander Romanovsky, who joined us live from Switzerland! They discuss the deep intricacies of the great Russian piano concertos and compositions, keeping musically active in quarantine, and recall memories from their classical music education.

Brian believes that classical music is deeply serious, riotously humorous and everything in between. He exhibits a healthy respect for this great art, and the great artists who create it, and balances that regard with a tasteful irreverence in his presentations on Classical KUSC. Ultimately, Brian believes there are few absolutes when it comes to music–only personal taste. If you don’t like something, you’re not wrong. Brian has occasionally been criticized for using words like, “awesome,” “facepalm,” and “dude” on the air…and he’s fine with that. Classical music purists may not fully understand Brian’s love for hip-hop and bluegrass music, but then when he begins to geek out over the intricacies of a Mahler symphony, everything begins to make sense again.

Pablo Sáinz-Villegas has been acclaimed by the international press as the successor of Andrés Segovia and an ambassador of Spanish culture in the world. Since his debut with the New York Philharmonic under the baton of Rafael Frühbeck de Burgos at the Lincoln Center, he has played in more than 40 countries and invited to play with orchestras such as the Berlin Philharmonic, Chicago Symphony, Philharmonic of Israel, Los Angeles Philharmonic, and the National Orchestra of Spain, making him a benchmark for the symphonic guitar.

Described by The Herald as "extremely good, concise, clear, incisive and expressive," David Danzmayr is widely regarded as one of the most talented and exciting European conductors of his generation.

Principal Bassoon Rose Corrigan joins host and Principal Flute Ben Smolen this week. Rose has one of the most impressive and extensive performance histories of any musician out there today, with over 800 film soundtracks under her belt, including "Star Wars" and "March of the Penguins."

Recipient of the prestigious 2015 Avery Fisher Career Grant and the 2017 Lincoln Center Award for Emerging Artists, violinist Paul Huang is considered to be one of the most distinctive artists of his generation. The Washington Post remarked that Mr. Huang "possesses a big, luscious tone, spot-on intonation and a technique that makes the most punishing string phrases feel as natural as breathing," and further proclaimed him as "an artist with the goods for a significant career" following his recital debut at the Kennedy Center.

Mezzo-soprano Kirstin Chavez is a past guest artist with Pacific Symphony, most recently for last year's Café Ludwig concert, "To Tell A Story," hosted by Orli Shaham. Principal Flute Ben Smolen hosts this special Symphony Mixer as they discuss living as an artist in quarantine, the importance of music education, and her time singing in some of the most famous roles in the opera repertoire. You can learn more about Kirstin and her work here: http://www.kchavez.com/

Headjoint-maker at Wm. S. Haynes Flutes Aiven O'Leary joins host and Principal Flute Ben Smolen for this week's informational Symphony Mixer, as the two discuss Ben's flute, the ins-and-outs of making such a unique and complex instrument, and tell some stories about their time working together.

This Symphony Mixer this week features Long Beach Block x Block, a brand-new chamber ensemble made of our Symphony musicians. They discuss the origins of this group, some of the pieces they've orchestrated and performed and the future of chamber music during a pandemic. Ben Smolen, Meredith Crawford, Joshua Ranz and his wife Lelie Resnick, Christine Frank and Michael Franz comprise this incredibly talented group.

Principal Flutist Ben Smolen, host of our Symphony Mixer series, is joined by Principal Violist Meredith Crawford for a fascinating conversation spanning her work recording for Hollywood films, her work composing a piece for the chamber group Salastina, and her participation in LB Block x Block, a stellar ensemble formed with Pacific Symphony musicians who live in Long Beach!

Principal Flute Ben Smolen hosted Mei-Ann Chen, the esteemed music director of the Chicago Sinfonietta, a classical music organization focused on highlighting the works of more diverse and lesser-known composers. It's a fascinating and light-hearted conversation about her time with the Sinfonietta, her thoughts on programming with diverse composers and her experiences conducting our own Symphony!

Host of our Symphony Mixer series, Principal Flute Ben Smolen, is joined by Principal Cellist Warren Hagerty for the third installment of our weekly Symphony Mixer series! They discuss Warren's "Bach Project," his music education in Southern California, current world and cultural events, and answers your questions about everything cello!

Principal Flutist Ben Smolen hosts Pacific Symphony's concertmaster, Dennis Kim, who explores the history behind his Stradivarius violin and talks about his passion for sports and his previous concertmaster appointments.

In this first-ever virtual Symphony Mixer, Principal Flutist Ben Smolen hosts Café Ludwig host and curator Orli Shaham in conversation and performance. They discuss performing in the Samueli Theater together for Café Ludwig, Orli's living in New York during the height of the pandemic, how the arts (and artists themselves) are dealing with the stress of quarantine, and more!

Join members of the Symphony family as they talk about various aspects of their craft with the Governing Members, a Symphony support group. Enjoy an intimate peek behind the scenes of our orchestra!

Meet Pacific Symphony's new Assistant Conductor and Youth Orchestra Music Director Jacob Sustaita! We are thrilled to have him join the Symphony Family and see him conduct in 2021. Get a sneak peek of his artistic plans with this video clip as we introduce him to our Governing Members.

What does it take for your Pacific Symphony to perform on stage under the bright lights?  An orchestra operations team!  Join Director of Production Will Hunter, Director of Multimedia Operations William Pruett and Artistic and Operations Coordinator Dani Reynolds for Coffee & Conversations and learn the behind-the-scenes of production and the digital medium in "Orchestra Operations 101."

Music Director Carl St.Clair talks with our Governing Members about selecting music for the Pacific Symphony and programming for the concert hall and digital medium!

Music Director of Pacific Symphony Youth Wind Ensembles (PSYWE) Dr. Gregory Whitmore engages with our Governing Members in answering their questions and sharing his conducting training, career and major impact the Governing Members have on its PSYWE students.