The Music of Shahram Nazeri and Hafez Nazeri

Doors open at 7 p.m. Enjoy traditional Iranian dances and a Haft-sin table in the lobby before the concert. 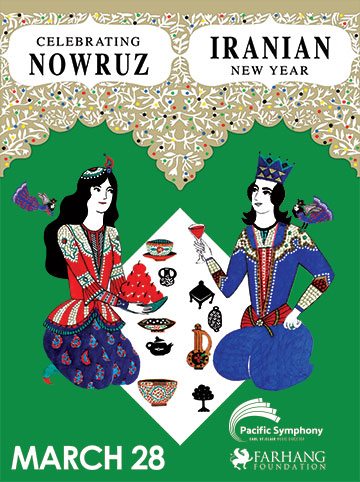 With an international reputation as a conductor and composer, Shardad Rohani is one of the most sought after, successful conductors on the music scene today. Educated at the Academy and Conservatory of Music in Vienna, Austria, Rohani has been the recipient of several important scholarships and awards both in Europe and United States. These include the A.K.M Scholarship, Vienna, Austria, and the ASCAP Scholarship, Los Angeles, California.

Rohani is the music director and conductor of the COTA symphony orchestra in Los Angeles. He has appeared as a guest conductor with a number of prestigious orchestras including the London Royal Philharmonic concert orchestra, Minnesota Symphony Orchestra, Colorado Symphony, San Diego Symphony, Indianapolis Symphony, New Jersey Symphony, Zagreb Philharmonic and the American Youth Symphony and others. He conducted an open-air concert with the London Royal Philharmonic Concert Orchestra in the Parthenon, Athens, Greece. This concert was acclaimed by both critics and audience and became the most widely viewed program ever shown on Public Television in United States.

Shahram Nazeri is the undisputed icon of Classical Persian and Sufi music. Born in a Kurdish musical family, he was the first vocalist to set Rumi’s poetry to Persian music thirty- five years ago. Thus, he was able to establish a tradition of Sufi music within both Classical Persian music and Kurdish music. His music was instrumental in introducing Western musical audiences to both Sufism, and to the poetry of Rumi. The New York Times has dubbed him the “Persian Nightingale”, and the Christian Science Monitor has called him “Iran’s Pavarotti”.

Most recently he was the first Iranian Musician to be awarded with the prestigious Chevalier des Arts et Lettres medal from the government of France for his lifetime achievements in Iranian and Sufi Music. In November 2007, Asia Society awarded Shahram Nazeri with the prestigious Lifetime Cultural Heritage Award for his pioneering efforts of introducing the poetry of Rumi to the West through his music. The Ministry of Culture in Iran named him the “Best Singer of Classical Persian and Sufi Music.”

Nazeri has released over forty recordings to date. His Gol’eh Sad Barg recording has held the record for the best-selling album of Classical Persian music and Sufi music in history. His latest collaboration with his composer son Hafez Nazeri, UNTOLD is the first album in history of the Middle East to hit the number spot on Billboard's Classical chart two times. "Untold Tour" is the highest selling concert tour in history of Iranian music with nearly 400,000 in attendance in 2015-16 season. His work The Passion of Rumi, composed by Hafez Nazeri, was chosen by Los Angeles Times and Boston Globe as one of the five bestselling CDs in World music for 2007.

His musical talents were first nurtured by his mother at a very young age. Throughout his childhood, he was under the tutelage of the most renowned masters of Persian music, including Abdollah Davami, Nourali Boroumand, and Mahmood Karimi. It was at age 11 that he performed on television for the first time, and by 29, he had gained a loyal fan base. He has continued to perform in Iran and abroad over the course of the last two decades.

Nazeri’s performances have garnered critical acclaim worldwide, and won him awards at music festivals around the world. In 1975, he won First Prize at the Concours de Musique Traditionelle, the first competition to showcase Iran’s great performers.

He has performed at major venues worldwide, including the Festival of Aix-en- Provence, the Festival of Avignon, Theâtre de la Ville in Paris, the Tokyo Summer Festival, the Kodak Theatre (Oscar ceremony) in Los Angeles, the Royal Albert Hall, Barbican, the Festa Del Popolo in Italy, the Beiteddine Festival in Lebanon, the Kölner Philharmonie in Germany, Asia Society, World Music Institute, the Brooklyn Academy of Music (BAM) in New York, the Roma Europa Festival in Rome, Sao Paolo Music Festival in Brazil and Fes Festival in Morocco, along with many others.

In the years 2005 and 2006, Master Shahram Nazeri, along with his son’s new musical ensemble, launched In the Path of Rumi — a highly successful North American tour which performed record-breaking, sold-out concerts, to rave reviews. The venues included Los Angeles’ Kodak theater (12/11/05), which is the most highly attended Classical Persian music concert outside of Iran.

This international appeal led to several invitations to speak at various media outlets, including radio stations such as NPR in the United States, BBC, a live appearance on the Fox Channel (3/10/06), and an exclusive on ABC NEWS, following a recent New York performance.

The United Nations has honored Nazeri with a recognition award for his legendary contribution to the revival of Kurdish and Iranian Classical Music. The Irvine City Hall Award of Distinction in Persian music was given to Shahram Nazeri for his contributions in spreading Rumi’s spiritual message of peace through the language of music. UCLA has honored Shahram Nazeri with the Living Legend Award.

February 25, 2006 was named “SHAHRAM NAZERI DAY” in San Diego County by the Mayor and the Chairman of San Diego’s Board of Supervisors. Soon after this date, Shahram Nazeri also received a recognition award from the Congress of the United States, and was invited to perform and lecture at Stanford University, Columbia University, University of California Berkeley, University of California. Los Angeles, Emory University in Atlanta and Harvard University where he was recognized for his pioneering efforts in introducing Rumi to the West as well as for his innovations in Persian music.

Hafez Nazeri is Iran’s most influential and admired new composer and singer and the son of legendary musician Shahram Nazeri. Together they have accomplished the prominent role of introducing Persian/Sufi music to the Western world.

After 5000 hours work, Hafez's most anticipated recording released in 2014 as the first Middle Eastern musician by prestigious SONY CLASSICAL involving 48 Grammy Award winning artists and producer. Untold is the first album in history of the Middle East to hit the number spot on Billboard's Classical chart two times. "Untold Tour" is the highest selling concert tour in the history of Iranian music with nearly 400,000 in attendance in 2015-16 season.

Hafez was chosen by the Los Angeles Times as one of the Culture Monsters of 2009. Later on that year, as the first Middle Eastern musician in history, he premiered his Rumi Symphony Project at a sold out concert at Carnegie Hall and was met with standing ovations.

Over the past years he has performed sold out concerts to standing ovations at the most prestigious concert halls around the world such as Stern Auditorium, Carnegie Hall, Walt Disney Concert Hall, Atlanta Symphony Hall, Kodak Theater and Royal Albert Hall, among many others.

Hafez began voice lessons at the age of three, and went on to place first in many voice competitions. At seven, he began focusing his studies on tanbour and setar which he had been playing since he was three. He then became intrigued by the daf, a percussion instrument he taught himself to play. In the process, he created a unique technique that is now emulated by many of Iran’s young daf players.

By the age of nine, Hafez had already begun to perform alongside his father in many prestigious music festivals in Europe and the Middle East. At the age of sixteen he had performed at the Sfinks Festival in Belgium, the Festa Del Popolo in Italy, the Théâtre de la Ville in Paris and the Beiteddine Festival in Lebanon, along with many others. Hafez is considered to have broadened the technique of setar-playing and has received praise from musicians and craftsmen alike.

In 2000, Hafez assembled a talented group of young performers to form the Rumi Ensemble. Together they performed Hafez’s original compositions in a series of landmark concerts in twenty Iranian cities. These musical innovations not only reached younger audiences, they also had an impact on the musical scene in Iran and beyond. With 140,000 in attendance, the Rumi Ensemble’s concert in Tehran set a record for the highest attended concert in the entire Middle East.

Selected pieces from this tour have been performed by the Armenian Philharmonic Orchestra in London’s Royal Albert Hall, and at music festivals including the Sodra Teatern in Stockholm, the De Bijloke in Ghent, Belgium, as well as at the Fez Festival in Morocco and the Théâtre de la Ville in Paris.

At the age of 21, in a search for new artistic ground, Hafez came to New York to study Western classical music. In 2005, he received a Diploma in Composition and Conducting from the Mannes College of Music. Later, during the same year, Hafez, along with new members of his Rumi Ensemble launched “In the Path of Rumi," a highly successful North American tour which performed record-breaking, sold-out concerts, to rave reviews. The venues included The Atlanta Symphony Hall and Los Angeles’ Kodak theater (12/11/05)—- the most highly attended Persian classical music concert outside of Iran.

He was also featured in broadcast interviews, which included 10-minutes on CNN’s Live with Kyra Phillips, BBC World Service’s program, The Ticket with Mark Coles, a live appearance on the Fox Channel, an exclusive on ABC News, and an exclusive with the Associated Press.

Hafez is also the recipient of a UCLA Creativity Award for Most Distinguished Young Composer. The Irvine City Hall Award of Distinction in Kurdish music was given to Hafez Nazeri for his contributions in spreading Rumi’s spiritual message of peace through the language of music. The United Nations Association also recognized Hafez’s contributions and his innovation in undertaking the “In the Path of Rumi” tour.

February 25, 2006 was named Hafez Nazeri Day in San Diego County by the Mayor and the Chairman of San Diego’s Board of Supervisors. Soon after, he received recognition awards from the sheriff of Los Angeles, and the United States Congress, and was invited to lecture at Emory University and Harvard University, where he was recognized for his pioneering efforts and innovation in Persian music.

In 2007, Hafez premiered his most passionate and ambitious undertaking: The Rumi Symphony, as the first major celebration of Rumi’s 800th birthday anniversary. It was performed in the United States at the Walt Disney Concert Hall and received a standing ovation. He also released a new CD called The Passion of Rumi, which the Los Angeles Times and the Boston Globe chose as one of the five best CDs in World Music for 2007.

Hafez has also engineered a new instrument affectionately titled the Hafez, paying homage to the philosopher and poet Hafez with which shares his name. The Hafez is the first ever modernized instrument stemming from the rich Persian culture and extend the range of older version by 17 extra chromatics pitches and two more strings. 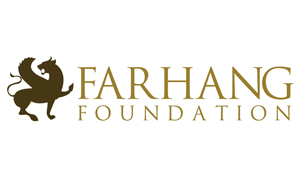