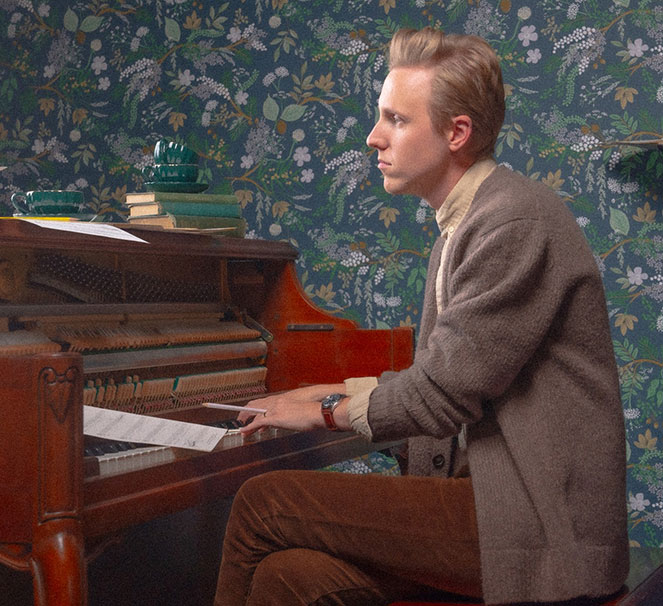 After the life-changing viral TikTok success of his song “I Hear a Symphony,” Cody Fry has embarked on a new creative journey with Symphony Sessions, a sweeping orchestral collection of new songs, new arrangements of old songs, and live videos featuring his signature widescreen approach to pop music. His bombastic cover of "Eleanor Rigby" was recently nominated for a GRAMMY in the category of "Best Arrangement, Instruments & Vocals."

A list of Cody’s career accomplishments might, at first, seem strange and wide-ranging. The Nashville-based singer/songwriter/composer/producer has written music for everything from national ad campaigns, to video games, apps, fashion events, Vimeo-Staff-Picked short films, A-list corporate scoring work for brands like Netflix and Google, and even a Super Bowl commercial for McDonald’s.

So when Cody Fry sits down to write music for himself, it’s the sum of those experiences that make him an artist like no other you’ll come across.

Growing up in a musical household, Cody was steeped in the world of music from a young age. His father, Gary Fry, is an orchestral composer who writes for symphonic organizations all over the world. Like father like son, Cody’s love of orchestration permeates much of his work and lends his sound a unique and truly cinematic quality.

His genre-bending discography and musicianship gives him the opportunity to perform in a huge range of artistic contexts. Cody has performed all over the globe including with the world-famous Metropole Orkest, and even had a rave-reviewed stint on American Idol. He once was asked to perform for Oprah on a Mediterranean cruise ship. She was super nice.

You can keep up with Cody on Instagram via @codyfry, TikTok via @codyfrymusic, or on his website, codyfry.com.