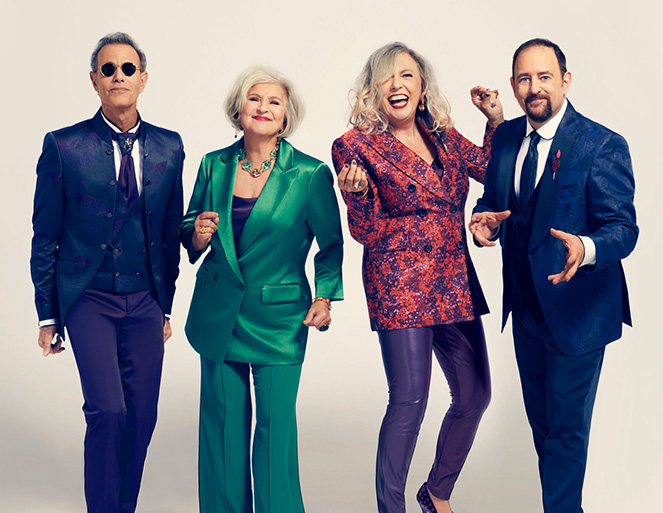 The Manhattan Transfer has achieved an incomparable career of pop and jazz hits, a legacy that defines the group as it celebrates its 50th Anniversary. The legendary quartet has won 10 Grammy Awards out of 20 nominations and has been inducted into the Vocal Group Hall of Fame.

In 1981, they became the first group ever to win Grammys in both Pop and Jazz categories in the same year – Best Pop Performance by a Duo or Group with Vocal for “Boy From New York City” and Best Jazz Performance for Duo or Group for “Until I Met You (Corner Pocket).” The dozen Grammy nominations they received for their Vocalese album in 1985 were second to Michael Jackson’s Thriller as the most nominated album in one year.

Their dynamic performances and sense of style have led them to become one of the most iconic music groups in the world. With their enduring creativity, energy, and joy in their music, the group has joined the pantheon of the entertainment industry.

The group was born when Tim Hauser was paying his bills as a New York City cab driver. He aspired to form a vocal harmony quartet that could authentically embrace a variety of musical styles and still create something unique in American popular music. In his taxi he met the next members of the group – Laurel Massé and Janis Siegel. Alan Paul, who was appearing in the Broadway cast of Grease at the time, was recommended as an additional male voice. The four of them became The Manhattan Transfer on October 1st, 1972.

Soon after their inception, the group began performing regularly throughout New York City – at underground clubs including Trude Heller’s, the Mercer Arts Center, Max’s Kansas City, Club 82, and other cabaret venues. Quickly, they were the number one live attraction in Manhattan. They were signed to Atlantic Records and released their self-titled debut album in 1975. The second single from that album, a cover of the gospel classic “Operator,” gave the group its first national hit. More hits, like “The Boy From New York City,” “Twilight Zone/Twilight Tone,” followed. The vocal remake of the jazz classic “Birdland” became the group’s anthem and earned them their first two Grammy Awards.

Cheryl Bentyne joined The Manhattan Transfer in 1979, replacing Laurel. Trist Curless became a member of the group in 2014. Together, Janis, Alan, Cheryl and Trist have remained true to the integrity and artistry left to them by founding member Tim Houser, who passed away in 2014.

The group has released 19 singles and 29 albums over their incredible career and their music has been widely featured in major films and television shows. Their 50th Anniversary celebration will see the release of a new album – with a symphony orchestra – and a 5-disc historic CD boxed set.

With sold-out world tours and record sales in the millions, The Manhattan Transfer continues to bring unique and extraordinary melodic and jazz-infused vocals to new and established audiences, spanning generations.