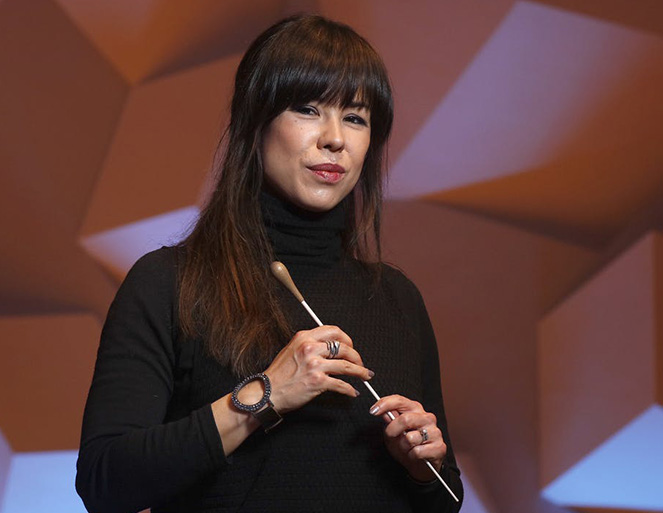 Sarah Hicks's versatile and vibrant musicianship has secured her place as an in-demand conductor across an array of genres, and as an educator, arranger, producer, writer and speaker committed to creating connections through music. Her career has seen collaborations with diverse artists, from Hilary Hahn and Dmitiri Hvorostovsky to Rufus Wainwright, Jennifer Hudson and Smokey Robinson; during the summer of 2011 she toured with Sting as conductor of his Symphonicities Tour. Her passion for cross-genre partnerships led to a 2019 album with rap artist Dessa and the Minnesota Orchestra, with whom she holds a titled position.

A specialist in film music and the film in concert genre, she is thrilled to create concert experiences which combine sight and sound, and that welcome new audiences to the orchestral genre. She has premiered Pixar in Concert and Disney-Pixar’s Coco; her live concert recordings can be seen on Disney+ (A Celebration of the Music from Coco) and heard on broadcast for ABC (The Little Mermaid). Her concerts with the Danish National Symphony Orchestra of film music, The Morricone Duel was released as an album in 2018, has been broadcast around the world and has garnered over 80 million view on YouTube.

A highly sought-after guest conductor, Hicks has worked extensively both in the States and abroad. Notable ensembles include the Philadelphia Orchestra, Chicago Symphony, Cleveland Orchestra, San Francisco Symphony, Los Angeles Philharmonic, Boston Pops, Cincinnati Pops, Dallas Symphony, Pittsburgh Symphony, Toronto Symphony, Melbourne Symphony, RTE (Dublin) Orchestra, Czech National Symphony Orchestra, St. Petersburg Philharmonic,Tokyo Philharmonic, and Malaysian Philharmonic, among others. Her opera appearances include the East Slovak State Opera Theater and the Curtis Opera Theater, as well as operas in concert with the Minnesota Orchestra and RTE Orchestra. Her commitment to new music led to the creation of an innovative micro-commission project which led to the premier of a major work by Judd Greenstein, and her recording of new concertos, Triple Doubles has been released by the Bridge label.

Dedicated to passing on to young musicians her passion for connecting to audiences, Hicks is a frequent guest lecturer and panelist and was on faculty of the Curtis Institute of Music from 2000 to 2005 and Staff Conductor until 2012. Her presentation, “The Art of Conducting”, has illustrated the idea of collaborative leadership to numerous organizations, civic groups and corporations. Her interest in the intersection of mental health and music led to the production of a concert titled “Music and the Mind” and her commitment to open conversation about mental health issues continues through her blogs, online advocacy and development of a Musical Mindfulness course.