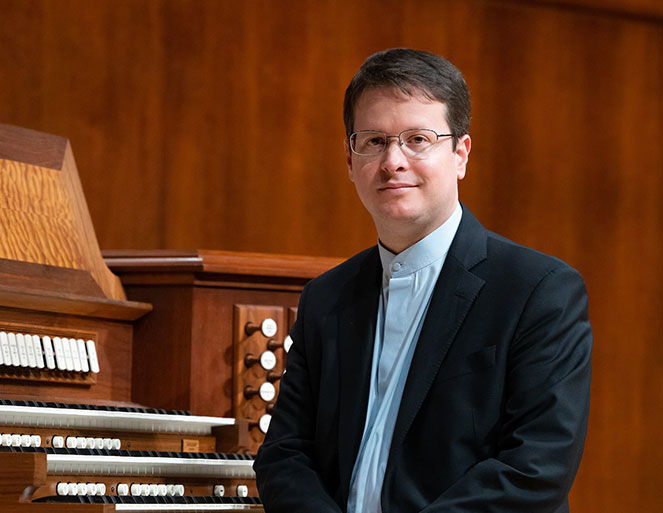 Heralded as “one of the major musicians of our time” by Alex Ross of The New Yorker and as “America’s leading organ performer” by The Economist, the internationally celebrated organist Paul Jacobs combines a probing intellect and extraordinary technical mastery with an unusually large repertoire, both old and new. He has performed to great critical acclaim on five continents and in each of the fifty United States. The only organist ever to have won a Grammy Award—in 2011 for Messiaen’s towering “Livre du Saint-Sacrément,”—Jacobs is an eloquent champion of his instrument both in the United States and abroad.

Jacobs has transfixed audiences, colleagues and critics alike with landmark performances of the complete works for solo organ by J.S. Bach and Messiaen. 20 years ago, he made musical history at age 23 when he gave an 18-hour marathon performance of Bach’s complete organ works on the 250th anniversary of the composer’s death. A fierce advocate of new music, Jacobs has premiered works by Samuel Adler, Mason Bates, Michael Daugherty, Bernd Richard Deutsch, John Harbison, Wayne Oquin, Stephen Paulus, Christopher Theofanidis, and Christopher Rouse, among others. As a teacher he has also been a vocal proponent of the redeeming nature of traditional and contemporary classical music.

Jacobs studied at the Curtis Institute of Music with organist John Weaver and harpsichordist Lionel Party, and at Yale University with Thomas Murray. He joined the faculty of The Juilliard School in 2003, and was named chairman of the organ department in 2004, one of the youngest faculty appointees in the school’s history. He received Juilliard’s prestigious William Schuman Scholar’s Chair in 2007. In 2017 he received an honorary doctorate from Washington and Jefferson College. In 2021, The American Guild of Organists named him recipient of the International Performer of the Year Award. Mr. Jacobs has written several articles for The Wall Street Journal.