Free Summer Fun! Symphony Brings “The Sound of Music” to Mission Viejo and Irvine for “Symphony in the Cities” 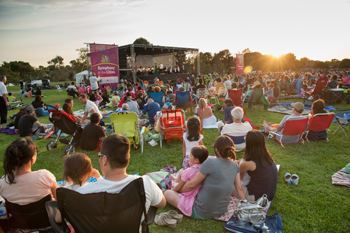 The perfect way to end a lazy summer day, “Symphony in the Cities,” is Pacific Symphony’s way of throwing a big musical party for its Orange County neighbors! Each summer, thousands gather with their loved ones to enjoy listening to the orchestra in a relaxed outdoor setting. This season, in addition to patriotic fare and classical pieces, Music Director Carl St.Clair has invited five singers to pay tribute to the famous von Trapps by performing memorable songs from the beloved movie, “The Sound of Music.” The audience also has a special opportunity to decide which of three pieces it would like to hear: Dvorák’s Symphony No. 9, “From the New World,” Mozart’s “Eine Kleine Nachtmusik (A Little Night Music),” or Beethoven’s Symphony No. 5. Families are encouraged to bring picnics, blankets and chairs, and arrive early for the Symphony’s Musical Playground and city festivities. 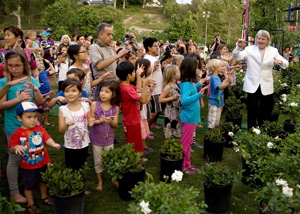 “There is no greater joy than bringing music into the community and building the blocks for tomorrow’s musicians and artists. Performing at Symphony in the Cities is a treat for all of us.” says Maestro St.Clair. “This year, I’m especially looking forward to welcoming a group of talented singers from Chapman University and California State University, Fullerton, who will join us in performing music from “The Sound of Music,” which is celebrating its 50th anniversary.”

This year’s free Symphony in the Cities concerts take place on Saturday, July 18, in Mission Viejo at “The Village Green” at Oso Viejo Community Park (24932 Veterans Way, Mission Viejo) and Sunday, July 19, in Irvine at Mike Ward Community Park Woodbridge (20 Lake Road, Irvine). In addition to the concert, which starts at 7 p.m., the City of Mission Viejo hosts its “Prelude in the Park” at 4 p.m. with a festive carnival theme. The Symphony’s Musical Playground—which features hands-on activities including instrument-making, a drum circle, an instrument petting zoo and a chance to meet the musicians—begins at 4 p.m. in Mission Viejo and 5:30 p.m. in Irvine. Also, Maestro St.Clair gives a conducting lesson to children, who during the concert help him conduct John Philip Sousa’s “Hands Across the Sea.” 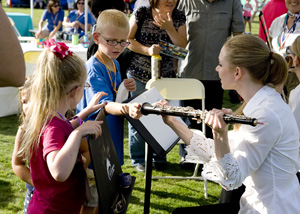 Winning five Academy Awards including Best Picture and Best Music, the classic film starring Julie Andrews and Christopher Plummer is known for its many memorable songs. Of these, the Symphony performs “The Sound of Music,” “My Favorite Things,” “Edelweiss,” “Sixteen Going on Seventeen” and “Climb Ev’ry Mountain.” Vocals are provided by Soprano Joslyn Sarshad (Maria Rainer), Soprano Tiffani Santiago (The Mother Abbess), Baritone James Lesu’i (Captain Georg von Trapp), Tenor Chris Maze (Rolf Gruber) and Soprano Juliet Kidwell (Liesl von Trapp). Before the audience choice, the orchestra performs Glinka’s Overture to “Russlan and Ludmilla” and the Armed Forces Salute. For a finale, St.Clair leads the audience in a sing along to “America the Beautiful,” and ends the concert with Sousa’s “Stars and Stripes Forever.”