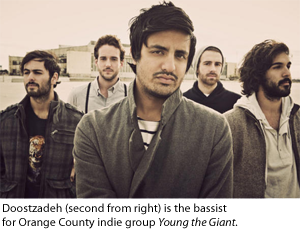 You can never predict how the Symphony will change each of the hundreds of thousands of people it touches each year. But the impact on every audience member, both young and young at heart, is unmistakable. Do you remember the moment music changed you?

“You have made me the man I am today,” Payam Doostzadeh said, “and I want to thank you.”

Doostzadeh grew up going to Symphony concerts with his father. As Music Director Carl St.Clair talked about the music from stage; Doostzadeh’s young mind was filled with intricate harmonies, the passion and focus of the composers and the joys of learning this musical language. Every concert he sat mesmerized, absorbing as much as he could.

That curiosity stayed with Doostzadeh as he continued to learn and grow by looking at his career through the many lenses St.Clair taught him.

Both St.Clair and Young the Giant, the Irvine-based rock band for which Doostzadeh plays bass, were given high honors as the 2013 Orange County Music Awards brought them together. But the highest honor was for Pacific Symphony, as Doostzadeh realized that the little boy he was would never have been the musician he is today without his Symphony experiences.