Pacific Symphony Principal Trumpet Barry Perkins To Be Featured In "Inauguration Fanfare For Joe And Kamala," Reflecting A Desire For National Unity And Inclusiveness 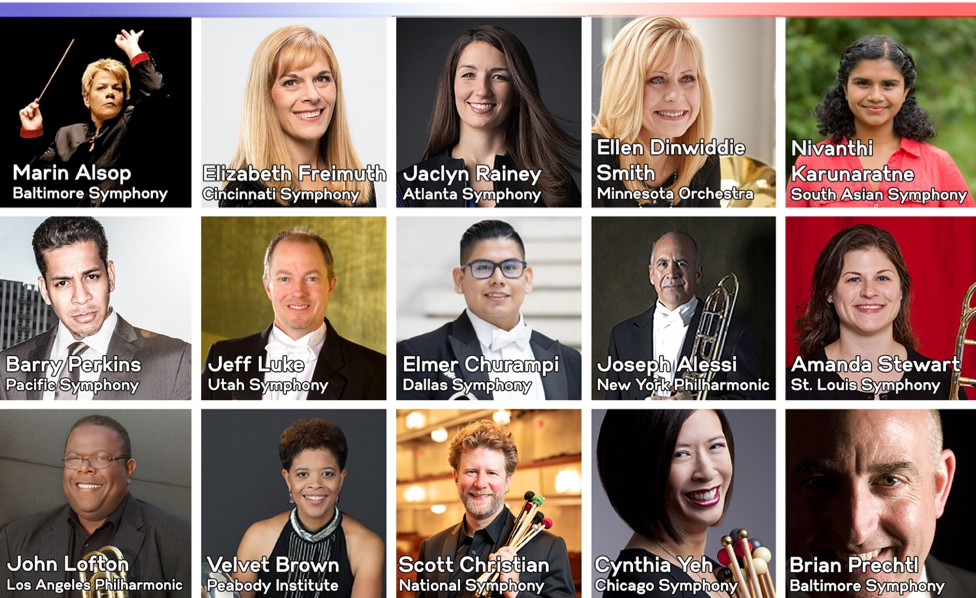 Principal Trumpet Barry Perkins has been invited to represent Pacific Symphony in the Hope & Harmony Ensemble, formed by concert tour company Classical Movements in honor of the inauguration of Joe Biden and Kamala Harris.

At a time when the orchestra world has been virtually silenced by the pandemic, Classical Movements has made a deliberate effort to bring together orchestras from every part of our country and to reflect the diversity of our people. Half of the performing musicians are women and six are musicians of color.

Aaron Copland’s iconic “Fanfare for the Common Man” to celebrate the American people and in honor of Joe Biden; and
Joan Tower’s dynamic “Fanfare for the Uncommon Woman” for Kamala Harris, our remarkable and “uncommon” first female vice president.

An Unprecedented Show of Unity within the Orchestra Industry

The virtual “Fanfare for Joe and Kamala” will be streamed on social media on Tuesday, January 19 at 9am PST. In an extraordinary demonstration of cooperation between our nation’s top orchestras, this performance will be livestreamed simultaneously on Facebook by Classical Movements, all 14 orchestras and other partners, with a combined digital footprint of over 7.6 million and growing.

In addition to footage of each musician, recorded in their homes and on site across the country, the presentation incorporates photographs and video illustrating “America the Beautiful” and the context of the struggle for civil rights and equality for women in the United States. Classical Movements has partnered with video and sound engineers Arts Laureate to produce these videos.

The Hope & Harmony Ensemble is conceived, produced and directed by Classical Movements. In the middle of a pandemic that has so seriously disrupted the classical music industry, we have transformed the necessity of virtual performance into an opportunity to bring together this diverse and representative group of musicians from all over the country in a way that would not have been possible under other circumstances. After 28 years working closely with the nation’s finest orchestras, Classical Movements is uniquely placed to bring together these incredible musicians and gratified by the enthusiastic response from participants and partners.

A Fanfare for Our Times, 12 Years in the Making

Classical Movements Founder and President Neeta Helms first envisioned an inauguration tribute to honor the first female president during the Democratic primaries in 2008, approaching Marin Alsop before having to set the idea aside. After reviving the idea in 2016 for Hillary Clinton’s potential inauguration, it is only now that the opportunity arrives—assuming additional significance in this historical and cultural moment.

“I am elated to be able to finally celebrate our first female Vice President. I am deeply inspired by Kamala Harris—and as an Indian-born American, I feel particular personal pride that her mother was Indian and in her archetypically American background,” notes Neeta Helms. “In this time of difficulty and hardship, it is also fitting that we celebrate Joe Biden, an example to us all for his ideals of decency and hope and his perseverance in the face of hardship and tragedy. Filling a unique and vital role in the music industry that has been hit so hard by the pandemic, it was essential to us to create an ensemble that represented and celebrated our nation’s diversity, featuring women and men equally.”

Marin Alsop adds, “It’s a privilege to pay tribute to this new leadership team and celebrate this historic moment in America!”

Barry Perkins commented, "Having classical music involved in any presidential event is especially significant to me. Our highest level of government deserves a distinguished high level of music. As this orchestra is comprised of representatives from orchestras from all around the United States, I am so honored to be representing my particular region."

Aaron Copland is perhaps one of the most iconic of American classical composers, and his work, in the words of conductor Leon Botstein, “helped define the modern consciousness of America's ideals, character and sense of place.” Born to Lithuanian-Jewish parents in Brooklyn in 1900, Copland wrote compositions that remain some of the most famous to ever emerge from the American classical music movement, and “Fanfare for the Common Man” is one of the most recognizable orchestral pieces of all time.

GRAMMY Award-winning American composer Joan Tower is consistently acclaimed as one of the most successful composers of her generation. Currently the Asher B. Edelman Professor of Music at Bard College, Joan Tower is notable for her bold and energetic compositions, shaped by her childhood and adolescence living in South America. Her “Fanfare for the Uncommon Woman” series, one of her most famous works, is dedicated to “women who are adventurous and take risks.” The first work in the series, featured on this program, was premiered in 1987 and is dedicated to Marin Alsop.

Marin Alsop is undoubtedly the most famous and lauded female orchestral conductor in the world. She is currently the music director of the Baltimore Symphony and chief conductor of the Vienna Radio Symphony. She was a protégé of Leonard Bernstein and was the first woman conductor of a major American orchestra. Her many accolades include conducting the Last Night of the Proms, and she was the recipient of a 2010 GRAMMY Award.

In his 17-year-long tenure as principal trumpet with Pacific Symphony, Barry Perkins has been hailed by critics as “fearless,” “first rate” and “phenomenal.” Throughout his career, he has performed with many professional orchestras as well as esteemed conductors. Barry has performed on the world’s most prestigious concert stages including those of Munich, Frankfurt, London, Paris, Lucerne, Hannover, Cologne, Dusseldorf, Essen, Vienna, Disney Concert Hall in Los Angeles, Carnegie Hall and Pacific Symphony’s Renée and Henry Segerstrom Concert Hall.

In addition to his current duties with Pacific Symphony, Perkins is a member of the music faculty at California Baptist University, UCI and founder of the Barry Perkins Trumpet Academy, which has reached hundreds of young musicians throughout Southern California.

About Pacific Symphony
Pacific Symphony, led by Music Director Carl St.Clair since 1990, has been the resident orchestra of Orange County’s Renée and Henry Segerstrom Concert Hall since 2006. Currently in its 42nd season, the Symphony is the largest orchestra formed in the U.S. in the last 50 years and is recognized as an outstanding ensemble making strides on both the national and international scenes, as well as in its own community of Orange County. In April 2018, Pacific Symphony made its debut at Carnegie Hall as one of two orchestras invited to perform during a yearlong celebration of composer Philip Glass’ 80th birthday, and the following month the orchestra toured China. The orchestra made its national PBS debut in June 2018 on Great Performances with Peter Boyer’s “Ellis Island: The Dream of America,” conducted by St.Clair. Pacific Symphony presents more than 100 concerts and events each year and a rich array of education and community engagement programs, reaching more than 300,000 residents of all ages.

Under Carl St.Clair, who enters his fourth decade as music director, Pacific Symphony has achieved new heights of musical excellence while also diversifying its programming and expanding its community engagement activities. Through commissions, premieres, and recordings, the orchestra has become a champion of contemporary American music, with a discography devoted almost entirely to 20th- and 21st-century music by American composers, including William Bolcom, John Corigliano, Richard Danielpour, Michael Daugherty and Philip Glass. The orchestra has recorded for Harmonia Mundi, Naxos, Koch International Classics, Reference Recordings, and Sony Classical, among other labels.

Pacific Symphony has been recognized with multiple ASCAP Awards for Adventurous Programming and included among the country’s five most innovative orchestras by the League of American Orchestras. The Symphony’s education and community engagement activities have also been recognized by the League, as well as the National Endowment for the Arts. These initiatives include community and youth concerts and ensembles, interactive events, masterclasses with guest artists, and classroom and summer programs for children.

About Classical Movements
The premier concert tour company for the world’s great orchestra and choirs, Classical Movements creates meaningful cultural experiences through music in 145 countries. An industry leader for over a quarter-century, Classical Movements organizes more than 60 tours every year, producing some 200 concerts every season. Producer of two international choral festivals—Ihlombe! in South Africa and Serenade! in Washington, D.C.—and the Prague Summer Nights: Young Artists Music Festival, in addition, Classical Movements’ Eric Daniel Helms New Music Program has commissioned 97 works from Grammy, Oscar and Pulitzer Prize-winning composers. Winner of Americans for the Arts’ BCA10: Best Businesses Partnering with the Arts Award, since its founding in 1992, as a truly global company, Classical Movements remains committed to facilitating cultural diplomacy across the world—promoting peace through the medium of music. During Covid-19, Classical Movements has continued to lead the way with innovative projects representing a pivot towards domestic touring and international tours for individuals and small groups, as well as presenting the first live chamber concerts in the United States since the pandemic.