The Legendary Beach Boys Ride a Musical Wave of “Good Vibrations” when they Join Pacific Symphony Pops for an Evening of Greatest Hits and “Fun, Fun, Fun”! 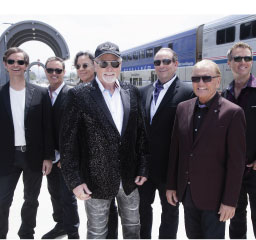 At the forefront of the Golden Age of rock ‘n’ roll, before The Beatles made their U.S. debut on “The Ed Sullivan Show” in 1964, there was The Beach Boys, scoring hit after hit. And now the quintessential surf band makes its most recent splash by bringing a sure-to-sell-out evening of their best-loved songs to Pacific Symphony Pops! Having made their mark singing about “California Girls,” it seems particularly appropriate that America’s most popular group throughout the 1960s is planning a visit to Orange County. While The Beach Boys of today bear little physical resemblance to the five cherubic California kids who first hit it big five decades ago, the music is a dead-ringer and will take the audience back to a time of innocence and fun in the sun with songs such as “God Only Knows,” “Don’t Worry Baby” and “You’re So Good to Me.”

Performing on both the first and second halves of the program, led by Principal Pops Conductor Richard Kaufman, The Beach Boys perform with Pacific Symphony Friday and Saturday, March 3-4, at 8 p.m., in the Renée and Henry Segerstrom Concert Hall. Tickets are $35-$169. For more information or to purchase tickets call (714) 755-5799 or visit www.PacificSymphony.org.

“The Beach Boys were not an ordinary group when it came to melody, harmonies and instrumentation,” says Maestro Kaufman. “They took music to a whole new level with their innovative style...simple, yet in many ways extremely sophisticated. The Beach Boys were truly a new sound, and today that sounds remains as wonderful and exciting as ever.”

The prototypical all-American boy band, The Beach Boys was founded in 1961, when it began rocking audiences, earning early popularity with the singles “Surfin’ Safari,” “Surfin’ U.S.A.,” “Surfer Girl” and “Be True to Your School.” With more hits in 1964 and ’65, including “Fun, Fun, Fun,” “I Get Around,” “Help Me Rhonda,” “California Girls” and “Barbara Ann,” The Beach Boys had formed the basis of a cultural phenomenon that has since transcended multiple generations and continued to bring joy to fans around the world. They have often been called “America’s Band,” and Allmusic has stated that their “unerring ability made them America’s first best rock band.”

“I’ve been blessed to conduct for many performers, including some wonderful groups, and without a doubt, there is something very special about The Beach Boys,” says Kaufman. “Their songs are memorable, the orchestra musicians love being part of The Beach Boys’ sound, and the audience basically goes crazy!! Everyone has a great time, and it is the perfect way to escape the real world and have—as The Beach Boys would say—‘fun, fun, fun’!”

The Beach Boys continue to hold Billboard/Nielsen SoundScan’s record as the top-selling American band for albums and singles, and they are also the American group with the most Billboard Top 40 chart hits (36). They also have 56 Hot 100 hits, including four number-one singles. Rolling Stone listed them at No. 12 on their 2004 list of the “100 Greatest Artists of All Time.” “Sounds Of Summer: The Very Best Of The Beach Boys” has achieved triple-Platinum sales status and their album, “The Smile Sessions,” has been heralded as 2011’s No. 1 Reissue of the Year by Rolling Stone. Inducted into the Rock & Roll Hall of Fame in 1988 and recipients of The Recording Academy’s Lifetime Achievement GRAMMY Award, The Beach Boys are a beloved American institution that remains iconic around the world.

“The Beach Boys represent America...and for many of us, it’s our personal past as well,” remarks Kaufman. “I grew up in West Los Angeles, and during that time, there seemed to be a special connection to all of us who loved the music of The Beach Boys. Their music captured a time when there was a blissful innocence among young kids...a time when the biggest problems seemed to be getting dates and finding a way to spend as much time as possible at the beach. Music is the greatest avenue to revisiting our past, and to experience the music of The Beach Boys in concert makes the journey fun, exciting and memorable.”

It all began in 1961, when brothers Brian, Carl and Dennis Wilson originally formed

The Beach Boys with cousin, Mike Love, and friend, Al Jardine. The group went on to cultivate a distinctive sound that was driven by striking vocal harmonies, blending such influences as the

Four Freshmen and various doo-wop groups with the infectious melodies of Chuck Berry and other early rock ‘n’ rollers. Their iconic songs continue to soar, thanks in large part to flawless singing from the razor-sharp band.

“It’s pretty miraculous that we can start out as a bunch of guys who didn’t know anything about fame or money, or anything like that,” says band member Mike Love. “All we knew was we liked to sing and make harmonies together. So to have it become part of American musical culture is pretty amazing.”