Ten of Australia’s Top Tenors Join Pacific Symphony to Blow the Roof off the Concert Hall as They Bring Joy to the World and Everyone “Home For The Holidays”! 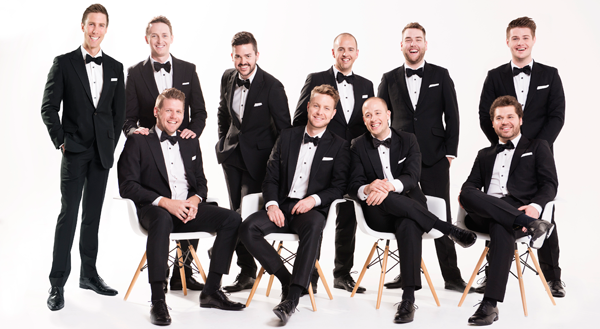 One is incredible, 10 is indescribable! Feel the power and brilliance of 10 exceptional voices as they rise together for “The Ten Tenors: Home for the Holidays,” a heart-swelling, earth-shaking, feel-good experience for the whole family! Considered Australia’s opera “rock stars,” The Ten Tenors deliver the quintessential holiday concert, captivating the audience with their unique selection of traditional and contemporary seasonal favorites. With soaring versions of “Joy to the World,” “Sleigh Ride,” “White Christmas,” “Winter Wonderland” and many more, “Home for the Holidays” is the perfect way to experience the spirit of the season. Led by Principal Pops Conductor Richard Kaufman, Pacific Symphony provides the backdrop to these magnificent voices. And making the season even brighter is Nancy Cartwright, voice actor for “The Simpsons,” who makes a special appearance to narrate everyone’s favorite holiday poem, “The Night Before Christmas.”

“The Ten Tenors: Home for the Holidays” takes place Friday and Saturday, Dec. 16-17, at 8 p.m., in the Renée and Henry Segerstrom Concert Hall. Tickets are $35-$167 ($195, Box Circle). For more information or to purchase tickets call (714) 755-5799 or visit www.PacificSymphony.org. Keeping with the giving spirit, The Ten Tenors released their newest album, “Our Christmas Wish,” nationwide on Nov. 1 and are donating all net proceeds from now until Jan. 31, 2017 to St. Jude Children’s Research Hospital.

“I have had the opportunity to conduct for The Ten Tenors before,” reflects Maestro Kaufman, “and it was a complete pleasure, both personally and professionally. Their magnificent singing is complemented by their wonderful personalities. Working with them was a real treat, and I can’t wait to conduct them again!

“Our Christmas concerts are created for families and people of all ages,” Kaufman continues. “And Christmas is all about singing, so our audience will have a chance to raise their voices with some of the most memorable carols. And, of course, there will be some surprises! While there are so many choices of entertainment and events during the Christmas season, I believe our concerts offer the opportunity to escape the ‘real world’ and experience the greatest music of the season, as well as the fun, excitement and spirit of ‘the most wonderful time of the year.’”

The Ten Tenors are one of Australia’s greatest entertainment success stories, with more than 90 million people worldwide witnessing their charismatic charm, camaraderie and virtuosic vocal talent. Following 16 years of sold-out performances across the globe, including more than 2,000 of their own headline concerts, The Ten Tenors have cemented their place as Australia’s premier classical-crossover group. Among their achievements are six platinum and gold records and more than 3.5 million concert tickets sold. No strangers to television, The Ten Tenors have made appearances on some of the world’s biggest broadcast events, including performing for Oprah Winfrey on “Oprah’s Ultimate Australian Adventure,” appearing on the Jerry Lewis MDA Telethon for an audience of 32 million viewers and for the Poland 2012 UEFA Cup in Warsaw.

The Ten Tenors’ producer, D.J. Wendt, says, “We like to think audiences come to our show to hear arias and classical pieces that will give them goose bumps like they have never felt before. With our shows, we know they will get that, but we promise to also make you feel like you have just rocked out or been to the best party you have been to in ages.”

In addition to the tenors, the audience is treated to a special appearance by the woman responsible for one of the most famous voices in television. “So what can you say about Nancy Cartwright, a.k.a. Bart Simpson?” Kaufman says with a smile. “Such a tremendous talent and so much fun! I can’t wait to hear her bring to life the story of ‘The Night Before Christmas’! The only question is—what voice will people hear telling the story? It’s going to be an amazing concert!”

Cartwright, an Emmy and Annie Award-winning actress is best known as the voice of spikey-headed underachiever, Bart Simpson, but also Ralph Wiggum, Nelson Muntz, Todd Flanders, Maggie Simpson, DataBase and Kearney on Fox’s 26-year-iconic hit, “The Simpsons.” Needless to say, it is the longest running scripted TV series in history. In her 34-year career, Cartwright has lent her voice to hundreds of other award-winning animated series, including “Rugrats” (Chuckie); “Kim Possible” (Rufus the Naked Mole Rat); “Richie Rich” (Gloria); “Animaniacs” (Mindy); “The Replacements” (Todd) as well as “Pinky and the Brain”; “The Critic”; “God, the Devil and Bob”; “Mike, Lu & Og”; and Chuck Jones’ final work, “Timberwolf.”

“Christmas is the most wonderful time of the year, and the music will definitely put everyone in the holiday mood, if they’re not there already,” says Kaufman. “It is always my hope that when people leave our concert hall following the performance, they will feel the excitement, joy and the true meaning of Christmas.”