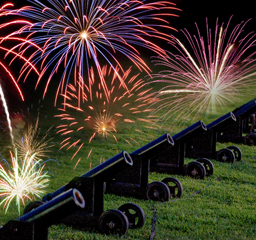 Labor Day weekend has never sounded so good! It’s time to celebrate and commemorate nearly three decades of Pacific Symphony concerts at Irvine Meadows Amphitheatre during the very last concert before the venue’s scheduled closure. Replete with booming cannons, dazzling fireworks and extraordinary music, “Tchaikovsky Spectacular” ensures this remarkable era in the Symphony’s history ends with a triumphant finale. The program is a Tchaikovsky hit parade featuring excerpts from the perennially popular ballets “Swan Lake” and “The Nutcracker,” and two beloved concertos—the Violin Concerto in D Major and Piano Concerto No. 1. Music Director Carl St.Clair takes the audience down memory lane and leads the orchestra and two virtuosic soloists, pianist Natasha Paremski and violinist Paul Huang, as well as the Huntington Beach Concert Band. The curtain falls on this chapter of the Symphony’s story to the traditional sounds of the electrifying “1812” Overture.

“Tchaikovsky Spectacular” takes place on Saturday, Sept. 3, at 8 p.m., at Irvine Meadows Amphitheatre. Tickets are $25-$108. Gates open at 6 p.m. for picnicking. Onsite, the award-winning caterer 24 carrots serves up a menu of delicious gourmet options for pre-concert dining. For more information or to purchase tickets, call (714) 755-5799 or visit www.PacificSymphony.org.

“In the past, Pacific Symphony has enchanted our summer audiences during our Tchaikovsky finale with his wonderful music,” says Maestro St.Clair. “It just seemed perfect to revisit these jewels as we say goodbye to Irvine Meadows before moving into our new home, taking Tchaikovsky’s music with us in our hearts and memories.”

The concert opens with selections from two of the world’s most famous and popular ballets, “Swan Lake,” which tells the story of Odette, a princess turned into a swan by an evil sorcerer’s curse, and “The Nutcracker,” a tale about a little girl who falls asleep after a party at her home and dreams herself into a fantastic world where toys become larger than life. “Swan Lake’s” romantic fable of ill-fated passion, dreamlike transformation and ultimate forgiveness is revealed through Tchaikovsky’s glorious score, and his sparkling music and talents for narrative melodies are revealed in “The Nutcracker” through Chocolate (Spanish Dance), Tea (Chinese Dance) and Trepak (Russian Dance).

“Composing music for ballet always gave Tchaikovsky so much joy and pleasure,” remarks St.Clair. “One can hear it in each of his brilliant ballet scores. Whether it is the lilt of ‘Waltz of the Flowers’ or one of the character pieces in ‘Swan Lake,’ he found beauty, levity and a sense of respite from his many personal challenges. With this in mind, I wanted to present portions of two of his most famous ballet scores—‘The Nutcracker’ and ‘Swan Lake.’ ”

Also on the program is Tchaikovsky’s exhilarating and virtuosic Violin Concerto—filled with beautiful, romantic melodies and intense emotions that make it a luminous concert centerpiece. With its graceful lyricism, contrasting bright and dark melodies and exuberant energy, the excitement was found in the music, but also in the composer himself. In fact, Tchaikovsky was so eager to write a violin concerto that he started composing it before he had finished his greatest opera, “Eugene Onegin.” Although its dedicatee, the great violinist Leopold Auer, first pronounced the concerto “unplayable,” it has since become one of the most beloved and programmed solo violin works in the repertoire.

“Summer after summer, we have alternated between Tchaikovsky’s Violin Concerto and the Piano Concerto,” says St.Clair. “Whether it was with the most recent Van Cliburn Competition winner, a seasoned soloist or a newcomer to the stage, these two concertos have been musical blessings, concluding season after season with their unforgettable melodies and virtuosic flare. So, I had the idea that we should pay respect for all that they have given us and just do both of them on our final concert. So, we are!”

Thunderous chords leap heroically across the piano to open Tchaikovsky’s Piano Concerto No. 1, performed by Paremski. This historically relevant work also happens to be the very concerto American pianist Harvey Lavan Van Cliburn played to win the First International Tchaikovsky Competition in 1958—at the height of the Cold War. The concerto, a showstopper —known for its sweeping melodies, crisp rhythms, huge note span and majestic chords—makes it a perfect choice for Paremski.

“To think these concertos received lukewarm receptions at their premieres is just astonishing,” says St.Clair. “Today, they are staples, masterworks, which give us more pleasure and musical reward each and every time we hear them. This is a mark of a true masterpiece. Tchaikovsky’s genius lives on. This is why his music has signaled closure to our summer musical offerings at Irvine Meadows. What composer—what music could be more fitting? Of course, ‘1812’ is the finale that signals to all of us to pack up our picnic baskets and Symphony blankets until next summer.

“This summer’s fireworks and fanfares will be our last at our beloved Irvine Meadows,” St.Clair says. “They will be the musical memories of a long-lived, long-loved relationship. Next season will find us in a new home, one filled with the same musical excitement and enlightenment.”

With her consistently striking and dynamic performances, pianist Paremski reveals voracious interpretive abilities with her flawless technique. Born in Moscow, she moved to the United States at the age of 8. The Chicago Tribune noted of her performance: “She roared through the thickets of notes in the outer movements (including the leonine cadenzas) as if their formidable technical difficulties didn’t exist, her fingers a blur, yet articulating rhythms and spinning long lyrical lines with deep idiomatic feeling.” The pianist was awarded several prestigious artist prizes at a young age, including the Gilmore Young Artists prize, the Prix Montblanc and the Orpheum Stiftung Prize in Switzerland. In 2010, she was named the Classical Recording Foundation’s “Young Artist of the Year.”

Recipient of the prestigious 2015 Avery Fisher Career Grant, Taiwanese-American violinist Huang is already recognized for his intensely expressive music making, distinctive sound and effortless virtuosity. Following his Kennedy Center debut, The Washington Post proclaimed: “Huang is definitely an artist with the goods for a significant career.” In 2013, The New York Times praised his “masterly account of Barber’s Violin Concerto” with the Orchestra of St. Luke’s at Alice Tully Hall.

Summer Festival 2016 is made possible by Avenue of the Arts Hotel and PBS SoCal, K-Earth 101, KPCC and KUSC.