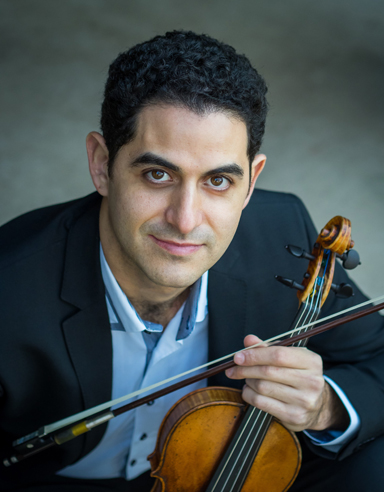 Expect fireworks to shoot from the strings during a breathtaking performance by young star-on-the-rise, Arnaud Sussmann, as he joins Music Director Carl St.Clair and Pacific Symphony for the second concert of the 2016-17 Classical Season celebrating 10 years in the Renée and Henry Segerstrom Concert Hall. While Sussmann performs Mozart’s most beloved violin concerto, his Third, the orchestra delivers Tchaikovsky’s astonishing Symphony No. 4, which the composer described as “a reflection of Beethoven’s Fifth Symphony.” From the opening fateful thundering brass fanfare to the dramatic finish, this quintessentially Romantic Russian music sweeps the listener away, evoking surging, potent emotions. Rounding out the program is an intriguing world premiere by the Symphony’s composer-in-residence, Narong Prangcharoen, whose “Absence of Time” spotlights the Symphony’s principal wind players.

And don’t miss Sunday Casual Connections’ first concert of the season on Oct. 23, at 3 p.m., in the Renée and Henry Segerstrom Concert Hall, “Tchaikovsky’s Fourth Revealed.” This 90-minute exploration of the classical program, led by Maestro St.Clair, features the spectacular finale of Tchaikovsky’s mighty Fourth Symphony, along with Mozart’s famous Violin Concerto No. 3, “Strassburg” and Prangcharoen’s new “Absence of Time.” Season tickets for the four-concert series range from $88-$339; single tickets are $25-$98.

Mozart’s Third Violin Concerto is arguably his most popular. Even Mozart thought so. On Oct. 23, 1777, he wrote his father: “In the evening at supper I played my Strassburg Concerto, which went like oil. Everyone praised my beautiful, pure tone.” Supposedly, it’s one of five violin concertos Mozart wrote during a single year (1775), four from Salzburg between June and September. However, recent speculation suggests the first and possibly the second are products from a few years earlier. (Even a composer given to major spurts of artistic growth such as Mozart would have been hard-pressed to pull off such a feat.)

Nothing else Mozart ever wrote for violin seems to have surpassed his Third Concerto. With distinctly greater sophistication, it is a far more intimate work than either his enthusiastic fourth or his electric fifth. Also with his Third, perhaps for the first time, the composer successfully filled the three-movement classical concerto with the kind of clever, colorful and dramatic life that made his operas so remarkable. When in the middle of the allegro’s first movement the orchestra disrupts the cheery, charming interaction and forces the violinist into the role of protagonist, it feels a little like an Italian opera. Later, during one of the concerto’s most magnificent moments, the emotional outburst becomes heroic, achieving peace after discord. Mozart’s mastery is especially evident at the end, as the traditional bombastic conclusion is replaced with the lighthearted cadence of oboes and horns.

And who better to perform such a gem? Nice Matin (France) wrote of virtuoso violinist, Sussmann: “The stature of a handsome young gentleman, the allure and assurance of an artist… He displayed the confidence, beauty of sound and elegance of the great violinists.” A thrilling young musician capturing the attention of critics and audiences worldwide, and winner of a 2009 Avery Fisher Career Grant, Sussmann has distinguished himself with his unique sound and profound musicianship. Minnesota’s Pioneer Press said, “Sussmann has an old-school sound reminiscent of what you’ll hear on vintage recordings by Jascha Heifetz or Fritz Kreisler, a rare combination of sweet and smooth that can hypnotize a listener. His clear tone a thing of awe-inspiring beauty, his phrasing spellbinding.”

Born in France, now living in New York, Sussmann is the winner of several international competitions, including the Andrea Postacchini of Italy and Vatelot/Rampal of France, Sussmann was named a Starling Fellow in 2006, an honor which allowed him to be Itzhak Perlman’s teaching assistant for two years. He plays on a 1760 Landolfi violin from Milan, circa 1760, that he says allows him to focus on the music, not the instrument.

“This is my primary (and only) violin!” Sussmann told Strings magazine. “It has a clear core to the sound but is also very deep sounding and even through all the registers. It has focus and spin…that allows me to let it speak as opposed to making it speak... (It) seems to have an extra ‘gear’ in concerts. I’ve been more and more pleasantly surprised with how it rings even more beautifully in a big concert hall.”

Also part of the Symphony’s program are the complexities and bold instrumental colors of Tchaikovsky’s seminal achievement, his Fourth Symphony. The work, written between 1877 and 1878, following a short disastrous marriage, was dedicated to his patroness and dear friend, Nadezhda von Meck. During this same period, Tchaikovsky was forced to confront his homosexuality as well as his infatuated student, Antonina Miliukova, who threatened suicide if her affections were not returned. Tchaikovsky made the unfortunate decision to marry her; the union lasted two miserable months.

As Tchaikovsky emerged from a profound period of writer’s block and depression, his music became urgent, highly charged and violent at times. From the very opening of the first movement a metaphor for “fate” rears up, or, as the composer put it: “the fatal power which prevents one from attaining the goal of happiness.” Between the moments of anguish and melancholy, Tchaikovsky proves his musical abilities are only heightened—even the plaintive oboe melody at the beginning of the second movement rises with a poignancy and brilliance, assisted by lush strings and roaring brass. The finale, complete with frenzied plucking and hurried scales, is both disturbing and exciting as the ominous “fate” theme returns.

Commissioned by Pacific Symphony, the final piece of the concert, Prangcharoen’s “Absence of Time” for flute, oboe, clarinet, bassoon and orchestra, gives the orchestra’s principal wind players a virtuoso workout and is based on one of the main factors impacting the world’s inhabitants: time. The piece has three main sections (fast, slow, fast), recalling traditional concerto form, but it does not use the solo instruments in the traditional way (soloists in contest with the orchestra). Inspired by the idea of juxtaposing different experiences of time, Prangcharoen divided the instruments into two groups: the four soloists and the orchestra, with the orchestra functioning as the keeper of time (‘real’ time), while the quartet of soloists fluctuates (in ‘imaginary’ time or in the ‘absence’ of time).

“Einstein saw time as the relationship of the motion of one object relative to the position of another object, as measured through observation,” says Prangcharoen. “But can we really measure time objectively? Music, the art, which moves through time, can affect our perception of time, and can affect each person’s perception differently. A composer can use music to convey time to an audience and different musical ideas can create different sensations of time.”