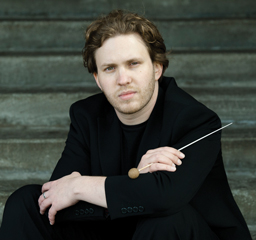 In a musical tribute to the United Kingdom’s northern most country, former assistant conductor of the Royal Scottish National Orchestra, David Danzmayr, makes his Pacific Symphony debut leading three different musical perspectives evoking the wild, romantic landscapes of Scotland. Most recognizable are Max Bruch’s fantasy on Scottish folk melodies for violin, played with great virtuosity by Chinese violinist Ning Feng, and Mendelssohn’s “Scottish” Symphony, inspired by a walking tour of the ruins of Edinburgh’s Holyrood Palace. Less familiar but also highly evocative is Scottish composer Hamish MacCunn’s “Land of the Mountains and the Flood”—a “charming Scotch overture that carries you over the hills and far away,” as George Bernard Shaw once described it.

The program spotlights Bruch, a composer whose violin music managed to include a little of everything—singing lines, passionate phrasing, extreme dynamics, overarching drama, as well as double- and triple-stops. And while Bruch’s first violin concerto is his best known, he was far from a one-hit wonder, having written two other much-admired violin concertos, including the beloved “Scottish Fantasy.” Bruch’s “Scottish Fantasy” is one of the most admired works in the violin repertory among audiences and players alike. Ironically, Bruch—who wrote more than 200 well-crafted pieces—resented the success of his first violin concerto, simply because it eclipsed his other compositions and hindered both his career and finances. Fortunately, he went on to compose his “Scottish Fantasy,” which he completed 14 years later.

The “Scottish Fantasy” was written in 1880 while Bruch was conducting in England. While remaining a devoted fan of Mendelssohn and Schumann, Bruch was also a strong opponent of Wagner and Liszt, and by the turn of the century, such opinions were considered old-fashioned and did nothing to support his reputation and legacy. If not for Bruch’s friendships with the violin luminaries of his day (Ferdinand David, Joseph Joachim, Pablo de Sarasate) and the nine works he composed for their instrument—particularly his First Violin Concerto and the “Scottish Fantasy”—his music might have been forgotten. But Bruch believed that the violin could “sing a melody better than a piano” and his use of folk tunes provided the perfect inspiration to prove his point. He believed deeply in the spirit of each song and recreated compelling moods perfectly. 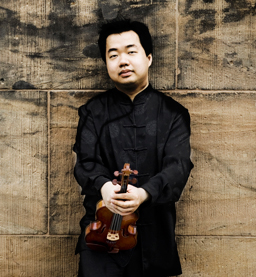 Giving Bruch’s piece its due is international sensation Feng, who is drawing great acclaim from audiences and critics alike. The Frankfurter Allgemeine Zeitung called his skill, “supervirtuosity—natural and paired with exceptional sensibility for nuance.” TimeOut wrote: “The young Chinese violinist wowed the bravo-spouting audience with his effortless virtuosity, clarity and command…it was Ning who stole the show.” And the New Zealand Herald raved: “Ning Feng’s total mastery could be seen in the precision and sweep of his bow, and heard in the effortless tonal range, from sweet to sumptuous.” Feng was first-prize winner of the 2005 Michael Hill International Violin Competition (New Zealand) and in the International Paganini Competition in 2006.

Sharing the Symphony’s stage with Bruch’s work is Felix Mendelssohn’s Third Symphony, which was the result of a “grand tour” of Europe. Considered part of his education, the well-to-do young 19th-century man had already visited several countries when in 1829 his father, a wealthy banker, sent him off on a new three-year expedition with England as the first stop. After giving concerts in London and receiving much acclaim in society circles, Mendelssohn headed north to Scotland, where a visit to the ruins of the chapel of Holyrood Castle near Edinburgh ignited his imagination.

Mendelssohn wrote home: “This evening in the deep twilight, we went to the palace where Queen Mary lived and loved; there is a small room with a winding staircase leading up to it...The adjacent chapel has lost its roof; grass and ivy grow thickly within; and on the broken altar Mary was crowned Queen of Scotland. Everything there is in ruins and ramshackle, open to the blue sky. I think I have today found the opening of my ‘Scottish’ Symphony.” The young composer began writing immediately.

The tour continued to Italy in 1830, where Mendelssohn continued to work on the symphony. But the warm Mediterranean climate took over his attention. “The loveliest time of the year in Italy is the period from April 15 to May 15,” he wrote home from Rome in 1831. “Who then can blame me for not being able to return to the mists of Scotland? I have therefore laid aside the symphony for the present.” The “present” turned out to last 10 years, but the result of this delay was a more polished and mature “Scottish” Symphony. He completed the work in Berlin in 1842, and conducted the first performance in Leipzig six weeks later. He dedicated it to one of his greatest admirers, Queen Victoria.

The third piece on the Symphony’s program is less well known, but possesses its own compelling vision of Scotland’s countryside. In 1887, 82 years after Walter Scott wrote “Lay of the Last Minstrel,” the poem inspired the Scottish composer Hamish MacCunn to compose, “Land of the Mountains and the Flood.” Harsh, wild, yet lyrically beautiful, the simple tune and lush orchestra paint a picture of the sprawling Scottish landscape in this Romantic piece that became MacCunn’s most famous orchestral work.

As a boy of 8, MacCunn had been taken to his first season of concerts, one of the famous August Manns’ series at Crystal Palace in London. So it seems appropriate that he should have returned there as a prodigious 19-year-old to hear the premiere performance of his major new work. Although the music critic George Bernard Shaw was not particularly kind in his review—attacking the perceived formulaic nature of its middle section—“The Land of the Mountain and the Flood” has stood the test of time, remaining by far the composer’s most popular work. MacCunn, who lived in London, rather than the beloved Scottish countryside portrayed in his music, unfortunately died from an illness at the young age of 48.

Described by The Herald as “extremely good, concise, clear, incisive and expressive,” Maestro Danzmayr is widely regarded as one of the most talented and exciting European conductors of his generation. Danzmayr is chief conductor of the Zagreb Philharmonic Orchestra in Croatia, the first to hold this title in seven years. As leader of this orchestra, he is following in the footsteps of famous conductors like Lovro von Matacic, Kazushi Ono and Dmitri Kitajenko. In the U.S., Danzmayr is music director of the ProMusica Chamber Orchestra in Ohio as well as the artistic advisor of the Breckenridge Music Festival. Previously, Danzmayr served as music director of the Illinois Philharmonic Orchestra, where his performances was lauded regularly by both the Chicago Tribune and Chicago Classical Review. He has served as assistant conductor of the Royal Scottish National Orchestra, which he conducted in more than 70 concerts, performing in all the major Scottish concert halls and in the prestigious Orkney-based St Magnus Festival. Danzmayr received his musical training at the University Mozarteum in Salzburg where, after initially studying piano, he went on to study conducting in the class of Dennis Russell Davies.

Pacific Symphony’s Classical Series is made possible by the Hal and Jeanette Segerstrom Family Foundation, and receives additional support from The Westin South Coast Plaza, KUSC and PBS SoCal.