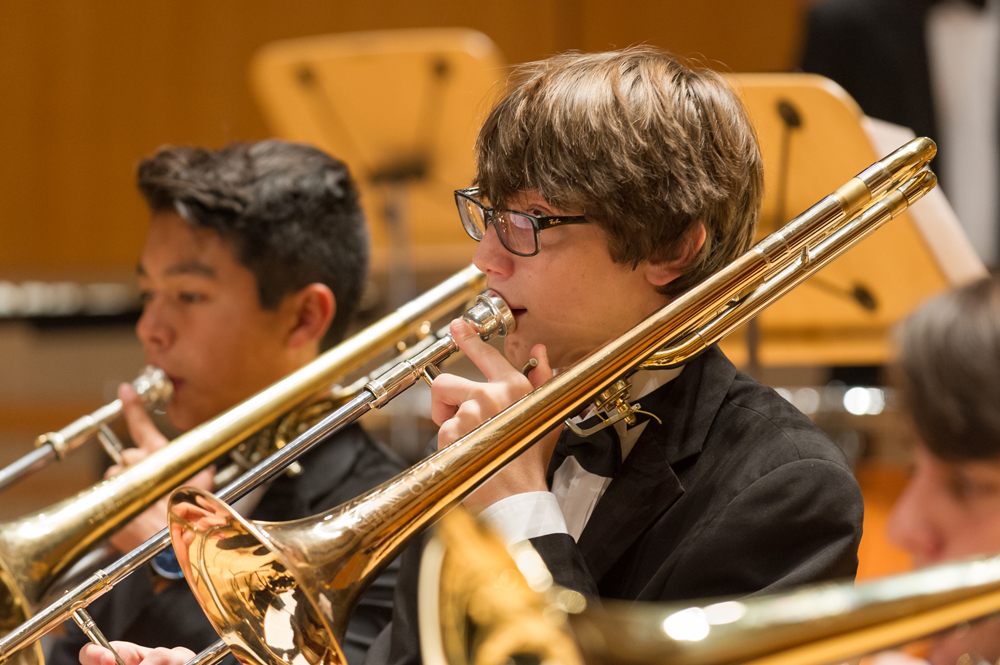 Pacific Symphony Youth Wind Ensemble (PSYWE) is in the business of making not only music but also dreams come true, as the group enters its 10th anniversary season in 2016-17—culminating in a nine-day international tour next summer! Regarded as one of the few premier youth wind symphonies in the nation, PSYWE, an 81-piece band made up of woodwind, brass and percussion students in grades 8-12, flies off on July 4-12, 2017. Led by Gregory X. Whitmore, PSYWE will visit Austria’s “City of Music,” Vienna, and glorious Salzburg, as they take part in the Summa Cum Laude International Youth Music Festival. Providing a unique platform for the world’s most talented youth choirs, bands and orchestras to perform in Vienna’s famous concert hall, Musikverein, this new global festival also gives budding musicians the chance to hear other groups perform and create bonds with music students from around the world.

“This is VERY exciting!” exclaims Maestro Whitmore. “This is PSYWE’s first tour in its 10-year history (2007-2017), and it is part of our larger celebration of our 10-year anniversary this concert season. PSYWE is one of the only youth wind ensembles associated with a major American orchestra in the United States. We are so thrilled to celebrate this anniversary both here in California and on our tour. The students will have their musical lives changed through performances in some of the world’s great concert halls—the Musikverein, the MuTh and the Vienna Konzerthaus, as part of the Summa Cum Laude International Music Festival.

“Plus, the students will have the opportunity to visit two of the most important cities in Western culture,” Whitmore continues. “So many things are possible with tours, and in addition to the sightseeing and phenomenal performances, the students will have the opportunity to grow and connect. My reaction since the word ‘go’ has been a mixture of excitement and anticipation. It’s going to be a great tour!”

Whitmore’s goals for the tour are: to make great music in three acclaimed concert halls with passion and deep collaboration with one another; to be immersed in all of the historical and cultural opportunities that abound in some of the world’s most important cities; to meet and interact with students from around the world and across cultures; and to grow and bond as a PSYWE family.

The festival takes place in Vienna, which apart from being regarded as the “City of Music” because of its musical legacy, is also said to be “The City of Dreams” because it was home to the world’s first psychoanalyst, Sigmund Freud. The capital of Austria and its biggest city, Vienna boasts numerous notable musicians who were born there, including: Franz Schubert, Johann Strauss I and II, Arnold Schoenberg, Fritz Kreisler, Alban Berg, Anton Webern among them. Many other famous musicians have flocked from other parts of Austria and Germany to work in Vienna, such as Joseph Haydn, Wolfgang Amadeus Mozart, Ludwig van Beethoven, Franz Liszt, Franz von Suppe, Anton Bruckner, Johannes Brahms, Gustav Mahler and others.

“The most wonderful thing about the Festival is that there are many different types of youth ensembles participating from all over the world—” explains Youth Ensembles Director Bella Staav, “a wind ensemble from Japan, an orchestra from Spain, a saxophone choir from Italy, a marching band from Australia, a women’s choir from Oregon and many others! Our students will have the thrilling opportunity to see, meet and cheer on so many different ensembles in their music-making—ensembles that approach their art with the same kind of passion and enthusiasm as they do themselves. In today’s world, that’s such a beautiful thing.”

Following a welcome event at St. Stephen’s Cathedral, the students have their first chance to perform as part of the Band and Orchestra Competition in the Golden Hall of the acclaimed Musikverein. The ensemble may also have the opportunity to perform in the MuTh Concert Hall, the newest concert venue in Vienna and home to the Vienna Boy’s Choir. The Gala Winners’ Concert and Awards Ceremony takes place at the Konzerthaus, where PSYWE may perform again at the adjudicators’ discretion. Afterward, there will be a farewell dinner reception at the Vienna City Hall hosted by the Lord Mayor of Vienna.

PSYWE will also rehearse with members of the Festival’s faculty at the University of Music and enjoy a visit to the ‘Haus der Musik’ (House of Music). This relatively new museum attributes great value to interactive learning experiences, while covering the history of the Vienna Philharmonic Orchestra and the city of Vienna as a center of music-making (Mozart, Haydn, Beethoven, Mahler, Schubert and others are documented).

In addition to rehearsing and performing while in Austria, the students have the opportunity to see the sights and soak in the culture. The adventure actually begins in Salzburg, a city of visual drama—framed by mountains, crowned by the Hohensalzburg Fortress and divided by the Salzach River. Salzburg has been an endless source of inspiration to the prince-archbishops who created its mighty Baroque churches and palatial Residenz, and to its famous son, Mozart, whose symphonies regularly headline the Salzburg Festival. The students will experience such sights as Salzburg Cathedral, St. Peter’s Abbey and the Getreidegasse, where the high, narrow houses nestle together and wrought-iron guild signs and romantic passageways add to the charm. Highlights include a visit to Mozart’s birthplace.

While in Vienna, students encounter such sights as the Parliament, City Hall, Hofburg Palace, Schönbrunn Palace, St. Stephen’s Cathedral and the Vienna Central Cemetery to see the tombs and memorials of famous composers Beethoven, Mozart, the Strauss family and Brahms.

“There is a great quote by Mark Twain that speaks well to this occasion,” says Whitmore: “ ‘Travel is fatal to prejudice, bigotry and narrow-mindedness, and many of our people need it sorely on these accounts. Broad, wholesome, charitable views of men and things cannot be acquired by vegetating in one little corner of the earth all one’s lifetime.’ ”

He adds: “I’m most proud of the fact that the students will have a life-changing opportunity that has come through their dedication, commitment and love for music. Who would have thought that when the students first began to play their instruments all those years ago, that this opportunity would come their way?”

Representing more than 20 schools in and beyond Orange County, PSYWE offers performance opportunities to young instrumentalists through high-quality and innovative artistic experiences. While this tour is the first for PSYWE, it is the fourth for Pacific Symphony Youth Ensembles (PSYE), which also includes Pacific Symphony Youth Orchestra, which toured Bulgaria in 2011 and China last June, and Pacific Symphony Santiago Strings (PSSS), which in March 2016 traveled to Tampa, Fla., to take part in the American String Teachers Association National Orchestra Festival. Representing 72 schools, PSYE perform in the world-class Renée and Henry Segerstrom Concert Hall, as well as at other venues in Orange County. Students enjoy a variety of interactions with Pacific Symphony musicians including sectional coaching, master classes and side-by-side performances.