Collaboration and Celebration: Pacific Symphony Youth Wind Ensemble Begins its 10th Anniversary Season with an Inspirational Program of Music Both Old and New 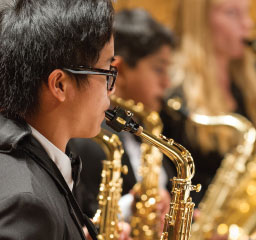 Pacific Symphony Youth Wind Ensemble (PSYWE), led by Gregory X. Whitmore, kicks off its milestone 10th anniversary season with works from past and present. Celebrate during Ron Nelson’s “Lauds,” a piece that is sure to engage and inspire as the talented musicians of PSYWE are backed by the mighty William J. Gillespie Concert Organ, performed by organist Kristen Lawrence. And bask in the reverence of David Maslanka’s “Requiem,” which along with “Lauds,” is rooted in antiquity. Then, look to today with Mason Bates’ “Chicago 2012” from “Alternative Energy,” a collaborative work for onstage electro-acoustics. Completing the program are two pieces by previous Symphony Composer-in-Residence Frank Ticheli: “Angels in the Architecture,” featuring soprano Chelsea Chaves, and “Rest,” led by special guest conductor, Pacific Symphony Music Director Carl St.Clair!

PSYWE opens the season on Sunday, Nov. 6, at 1 p.m., in the Renée and Henry Segerstrom Concert Hall. Thanks to the generosity of sponsors, this season’s concerts are free to attend, but tickets are required. To reserve a general admission seat, call the Symphony’s box office at (714) 755-5799 or visit www.PacificSymphony.org.

“With a commitment to music education and creative expression at its core, the Youth Wind Ensemble proudly celebrates 10 years of making great music,” says PSYWE Music Director Whitmore. “And because the 2016-17 season is a special anniversary for PSYWE, the overall programmatic theme of the season is: ‘Collaborations & Celebration.’ I feel the programming of this season reflects that ethos.”

“Music of Now & Before” opens with Nelson’s “Lauds,” subtitled “Praise High Day,” which honors the sunrise and is a celebratory work for winds and pipe organ. Employing the majestic William J. Gillespie Concert Organ, this exuberant, colorful work is intended to express feelings of praise and glorification for a new day. It’s one of the seven canonical hours that were selected by St. Benedict for the monks to observe the daily offices. “Lauds” is followed by Maslanka’s “Requiem,” a single-movement fantasia written in response to a Holocaust event that occurred during World War II. Both Nelson’s and Maslanka’s works find their roots in the music of the past.

“Nelson is the quintessential American composer,” says one of today’s top conductors, Leonard Slatkin. “He has the ability to move between conservative and newer styles with ease. The fact that he’s a little hard to categorize is what makes him interesting.” This quality has also helped Nelson gain wide recognition as a composer, and nowhere are his works embraced more than in the band world, where he won the “triple crown” of composition prizes in 1993 for his “Passacaglia (Homage on B-A-C-H).”

“A Requiem is a Mass for the dead,” says Maslanka, by way of explaining his work. “This relatively brief instrumental piece with the title, ‘Requiem,’ is not a Mass, but serves a parallel function—the need to lay to rest old things in order to turn the mind and heart toward the new. My ‘Requiem’ is both for the unnamed dead of all wars, and for each person making their own inner step, saying goodbye in order to say hello.”

The concert’s first half concludes with Ticheli’s highly moving “Rest,” whose title came about in two stages; originally written as a choral piece called, “There Will Be Rest,” composed in 1999 and based on a poem of the same name by Sara Teasdale; the band version came about in 2010. Ticheli shares that “ ‘There Will Be Rest’ was dedicated to the memory of Cole Carsan St.Clair, the son of my dear friends, conductor Carl St.Clair and his wife, Susan.”

Whitmore adds: “Programming one of Frank’s works is significant, given his contributions to the wind band medium, as well as his connection to Pacific Symphony. Most significantly, Maestro Carl St.Clair will conduct PSYWE in ‘Rest.’ ”

Featured on the second half, and in stark contrast, is “Chicago 2012,” which was extracted from the symphony, “Alternative Energy.” This unique piece juxtaposes the brash sounds of a jazzy brass section with the pops, hisses and whooshes of the particle accelerator, FermiLab, based just outside of Chicago. Whitmore further explains: “Mason Bates’ work is a futuristic collaborative work for electro acoustics and wind ensemble, and is a programmatic attempt to ‘look forward’ to the music of today. Hearing Bates’ music will be a new experience for our audience!”

The concert’s finale spotlights Ticheli’s “Angels in the Architecture,” featuring soprano Chaves. Inspired by the Sydney Opera House, with its halo-shaped acoustical ornaments hanging directly above the performance stage, the piece unfolds as a dramatic conflict between the two extremes of human existence, one divine, the other, evil.

“Artistry. Dedication. Passion,” ticks off Whitmore, as he describes PSYWE. “For the past decade, PSYWE has enjoyed a special place within the Pacific Symphony Youth Ensembles family. As one of only a handful of youth wind ensembles in the country associated with a professional symphony orchestra, PSYWE boldly presents the musical tradition, heritage and artistic diversity of wind literature.”