Pacific Symphony Youth Orchestra Returns to the Stage for a Moving Program Where Diversity and Magnitude Reign, Featuring Music by Copland, Wagner and Respighi! 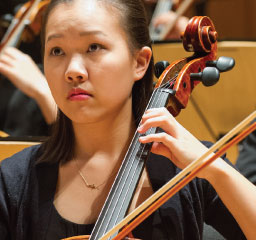 The stunning virtuosity of Pacific Symphony Youth Orchestra, led by Assistant Conductor Roger Kalia, will be on full display for an evening of soaring symphonic masterpieces sure to thrill the audience. Prepare to feel compelled by the regal fanfares of Wagner’s Overture to “Die Meistersinger von Nürnberg”; captivated by the homegrown Americana of Copland’s “Billy the Kid” Suite (preceded by a variety of musical excerpts from the suite that will be played and discussed from the stage); and transformed by the enveloping tranquility found in Respighi’s “Church Windows.” For the young musicians, it’s an evening of demanding works and an opportunity to shine. For the audience, it’s a chance to sit back and enjoy a uniquely memorable showcase of young talent and awe-inspiring artistry during this masterful evening of diverse music.

“This will be PSYO’s second concert of the season, and I am always amazed by the musicality and artistry of the orchestra,” says Maestro Kalia. “The program itself is extremely challenging but they are more than up to the task. I have been so pleased with the improvement and hard work that our musicians put in week after week. We had an immensely successful season opening concert back in November, and I am thrilled to witness how much they have bonded as an orchestra since then, both musically and personally.”

PSYO’s Spring Concert takes place Sunday, March 26, at 7 p.m., in the Renée and Henry Segerstrom Concert Hall. Thanks to the generosity of sponsor Carlos Mollura, this concert is free to attend, but tickets are required. To reserve a general admission seat, call the Symphony’s box office at (714) 755-5799 or visit www.PacificSymphony.org.

“Every piece is stylistically different from the other, which makes for a program that is eclectic and unique, as well as being extremely educational for our musicians,” states Kalia. “In general, I love to program works of great variety for our audience, while also making sure that our musicians are playing as many different styles of music as possible. The music of Wagner is heavy and thick, while Copland requires a playfulness and rhythmic feel that is extremely unique to any other composer. Respighi’s sound world requires power and endurance, while also being extremely intimate and nostalgic.”

Wagner’s Overture to “Die Meistersinger von Nürnberg” is grand and majestic in terms of its sound world. The opera, or as Wagner liked to call it, the “music drama,” was written between 1862 and 1867, but it is clear that Wagner had crystallized the themes well before it was completed. The overture, which contains the main themes, was finished long before the opera and was played several times on its own for concerts. It’s a brief, 10-minute work that combines the power of the brass with lush and rich melodies from the strings. The nobility of character that Wagner ascribes to Meistersinger’s dramatic “hero” is suggested at the outset of his Prelude to Act I, which opens with a heraldic theme in which the prominence of the brass foreshadows its prevalent use throughout. Wagner was a master at capturing the different themes musically from each character in the opera, and this can be clearly heard in the music.

Copland’s “Billy the Kid” Suite is a musical depiction of the American Wild West. It was originally a one-act ballet, based on a semi-fictional treatment of the notorious outlaw William H. Bonney, better known as Billy the Kid. This suite features the most famous musical numbers from the ballet. Copland quotes authentic cowboy songs such as “Goodbye Old Paint,” “Git Along, Little Doggies” and “Old Paint,” and adapts them into his own unique musical language. This is Copland depicting the American sound at its finest: jaunty, irregular rhythms; simple, triadic harmonies, and intimate and grand orchestral texture.

There are numerous solo features for the musicians in the orchestra, “which is extremely exciting for them,” notes Kalia. Vivid, energetic and beautiful, and also easily understood, the music captures the imagination with ease. “In addition to the actual music, I plan on exploring

Copland’s ‘Billy the Kid’ Suite with a pre-performance discussion about the music, which will feature a variety of musical excerpts. I feel very strongly about engaging with our audience, and giving them background on the music that they will be listening to in order for them to appreciate the music even more during the actual performance.”

Respighi’s “Church Windows” was adapted from an earlier piano suite of his, and although it is not a programmatic work, the listener can’t help but imagine various storied stained glass windows throughout the piece. There are numerous solo features, most notably in the clarinet and trumpet, and heavy brass and percussion. The organ is also featured, particularly in the fourth movement, with Respighi ending the piece in a grand and heroic fashion. During PSYO’s concert, the piece will be enhanced visually by images of stained glass windows from different churches projected on the concert hall’s big screen.

“Respighi’s ‘Church Windows’ is a rarely performed work, which is quite puzzling to me since there are so many wonderful musical moments for the orchestra,” says Kalia. “Pacific Symphony actually recorded this work in the early 1990s, which goes to show the musical abilities of the PSYO.” Similar in style from Respighi’s more famous “Pines of Rome,” the work is cast in four movements that depict various religious events in the stained glass windows of Italian churches. “We will also be displaying various images and artwork onto a projection screen of stained glass windows from different churches throughout Italy during our performance of the Respighi.”

Together the program’s pieces take the audience on an enthralling musical journey that travels down widely varying paths. “I just want to say that this is the perfect concert for a first-time concertgoer,” adds Kalia. “The combination of musical selections as well as an amazing, top-level youth orchestra will make for a magnificent evening.”

PSYO has emerged as Orange County’s premier training orchestra, offering performance opportunities to instrumentalists in grades 9-12 and providing members with a high-quality and innovative artistic experience that encourages musical and personal growth. It is one of three highly coveted education programs under the umbrella of the Pacific Symphony Youth