Pacific Symphony Youth Orchestra, Invigorated by Recent Tour to China, Returns to Segerstrom Concert Hall to Kick Off 2016-17 Season with Works by Glinka, Gershwin and Saint-Saëns 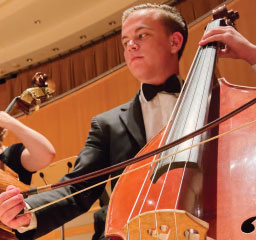 It may feel a little daunting to try to top its last triumphant season, but Pacific Symphony Youth Orchestra (PSYO), led by Assistant Conductor Roger Kalia, is up to the task! Energized by a year of artistic achievement and recently returned from its highly successful summer performance tour of China, Southern California’s finest young orchestra musicians inaugurate their 2016-17 season with an array of charismatic works. First, Glinka’s thrilling Overture to “Russlan and Ludmilla” ushers in an exciting evening that also includes selections from George Gershwin’s soulful “Porgy and Bess.” Then, the audience will feel the might of this brilliant young orchestra electrified by the sound of the William J. Gillespie Concert Organ during Saint-Saëns’ powerful Symphony No. 3, his “Organ Symphony.”

PSYO’s first concert of the season takes place Sunday, Nov. 6, at 7 p.m., in the Renée and Henry Segerstrom Concert Hall. Thanks to the generosity of sponsors, this season’s concerts are free to attend, but tickets are required. To reserve a general admission seat, call the Symphony’s box office at (714) 755-5799 or visit www.PacificSymphony.org.

“Our recent tour to China brought the group closer together, both musically and personally,” says Maestro Kalia. “As an orchestra, we literally spent almost 24 hours a day together during the 10-day tour, and this created a true sense of camaraderie and togetherness within the orchestra. We hiked The Great Wall of China, witnessed a Shanghai acrobats show, and toured the Forbidden City, as well as performed four extremely memorable and thrilling concerts at world-class venues. All of these events have translated into our music making this season, and I feel that the overall level of the ensemble is higher than ever.

“I wanted a season-opening program that would show the orchestra’s versatility and talent, as well as highlight the different sections of our orchestra,” he continues, “so we are opening the program with Glinka’s Overture to ‘Russlan and Ludmilla,’ which is an exciting and virtuosic piece.”

Glinka’s joyous overture is quite a curtain raiser and an opportunity to show off the Youth Orchestra with loud, fast and electrifying playing. The most popular music from Glinka’s opera, “Russlan and Ludmilla,” based on a story by Pushkin, the Father of Russian literature, the overture whisks the audience off on a musical sojourn to Russia. Effusive admiration for the opera’s exuberant melodies, showy flourishes and heroic tone gradually replaced the initial cool reception. Glinka wrote the overture in 24 hours, during which he became the first composer in the classical tradition to incorporate the whole-tone scale. Regarded as the father of Russian classical music, Glinka discovered a way to rouse the spirits of players and listeners alike with his buoyant work. The swift pace and lively spirit sets the PSYO musicians in a race to the finish that captures the overall character of the opera.

“Following ‘Russlan and Ludmilla’ are Gershwin’s selections from ‘Porgy and Bess,’” says Kalia, “which combines the worlds of jazz and opera, and features a number of prominent solos for oboe, cello and xylophone.”

Familiar to many ears, the songs “Summertime,” “A Woman is a Sometime Thing,” “I Got Plenty o’ Nuttin’,” “Bess, You is My Woman,” “It Ain’t Necessarily So,” “Picnic Parade” and “Oh Lawd, I’m on My Way” all come from the folk opera, “Porgy and Bess.” It’s also an opera that climaxed Gershwin’s brief but stupendous career as both a popular and serious composer. After reading DuBose Heyward’s novel “Porgy” in 1926, Gershwin was immediately interested in transforming it into an opera, but it took almost eight years for him to begin writing the music. First performed in 1935 by the Theatre Guild in Boston and New York with an all-black cast, the opera ran for 124 performances—a flop by Broadway standards. It was revived in 1942, almost five years after Gershwin’s death, when the show had the longest run of any revival in Broadway musical history.

“We will close out our program with Saint-Saëns’ majestic Symphony No. 3, ‘Organ Symphony,’” says Kalia. “The work will feature the glorious William J. Gillespie Concert Organ, which contains 4,322 pipes! I can’t think of a better way to open my second season as music director of this wonderful orchestra.”

Saint-Saëns said he had “given everything I was able to give” to his “Organ” Symphony.  It includes virtuoso keyboard passages, brilliant orchestral writing and the sound of a cathedral-sized organ—in this case, the magnificent William J. Gillespie Concert Organ. The “Organ” Symphony’s haunting opening does little to reveal the grandiosity of what’s to come and instead begins with a rising four-note figure that evolves into a much quicker allegro development. The tension dwindles into a slower, melodic section that finally introduces the organ in an unexpected way: tranquil. But it’s during the fourth movement that the true power and might of the organ shines through. Audiences may recognize this climactic moment from the family film, “Babe”; a melody that Saint-Saëns called “the defeat of the restless, diabolical element,” which leads to “the blue of a clear sky.”

“The ‘Organ’ Symphony is not just a showcase for the organ, but more of a collaboration with the orchestra,” says Kalia. “Saint-Saëns created a symphony that focuses on the wide range of sounds and colors that an organ is capable of producing: grand, majestic and intimate, among others. Meanwhile, the orchestra trades melodic lines and accompanies the organ throughout the work, often creating unique textures and colors. The William J. Gillespie organ is both visually and acoustically stunning, and the Saint-Saëns Symphony No. 3 showcases both the organ and symphony in the most compelling way.”