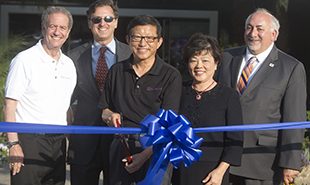 Trumpets played, flags were raised and a giant ribbon was cut to unveil the new Pacific Symphony administrative headquarters in the City of Irvine yesterday. Symphony President John Forsyte revealed the Board of Directors’ support in naming the building the Charlie and Ling Zhang Musical Arts & Education Center, to honor the man whose vision and generosity made the move possible. Located at 17620 Fitch Ave., Irvine, CA 92614, the building also houses arts partners Arts Orange County and the newly founded Orange County Music & Dance (OCMD). The Symphony’s offices contain 15,000 square feet of space, more than 55 percent than the previous location for the same rent, as well as a highly visible location off of MacArthur Blvd. A pre-event reception was held for donors who contributed naming sponsorships of office spaces for a “New Building Campaign” co-chaired by Scott Siegel and David Collins that has raised $500,000 so far. (A few offices are still available to sponsor. See below for the complete list of donors.) A celebratory flag raising and ribbon-cutting ceremony commenced at 5:45 p.m., and after, attendees were treated to a performance of the Allegretto movement from Mozart’s Piano Quartet No. 2 given by Symphony musicians and pianist Orli Shaham in the black box theater located at OCMD. 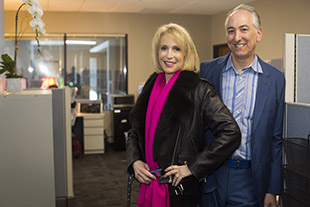 A number of remarks were given to thank Charlie and Ling Zhang and express gratitude for Pacific Symphony finally having a physical place to put its name on and to call home. Forsyte paid tribute to Charlie and Ling Zhang by first referencing the visionaries of Andrew Carnegie and Henry Huntington. “Orange County is similarly blessed with visionaries who can make a profound difference,” said Forsyte. “Think of a man who came to the U.S. with a few dollars and a clarinet who dreamt of being a professional musician. Charlie Zhang and his wife, Ling, have catalyzed dramatic change for our region and have given us all a gift that will transcend generations. We cannot thank them enough.”

Music Director Carl St.Clair recalled when the Symphony had its offices in a church basement in Santa Ana where the orchestra rehearsed. “We have definitely come a long, long way,” said St.Clair. “The reason for that is because we’ve never stopped dreaming. And Charlie’s presence here has shown us that there is no reason for Pacific Symphony to ever stop dreaming about the orchestra that it is going to become throughout the 21st century in our beloved Orange County. Opening these doors to everyone is a sign that we understand our responsibility to our community and to the great Pacific Symphony for years and years to come.”

“Thank you so much. It’s really a humble moment for me,” responded Charlie Zhang. “To quote Beethoven’s Ninth, ‘All man must become brothers.’ We are here together as brothers united. Ling and I came to America 37 and 39 years ago as little kids with a dream. Today, this building is part of a bigger dream – being proud to be American.”

OCMD CEO Doug Freeman and Arts OC President Richard Stein also spoke and a presentation was given by a representative from Congresswoman Mimi Walters’ District. 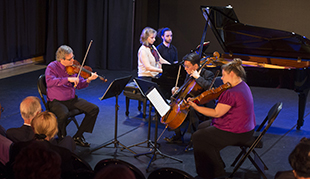 Zhang’s vision for OCMD was to create a place where young people can engage in the musical arts without financial barrier. Having OCMD next door creates an opportunity for the Symphony to utilize the performance and rehearsal spaces and create more programs for children and adults in the community. In addition to Pacific Symphony musicians holding music lessons in the building, the Symphony is launching Parent and Me: Music and Movement Workshops this June. The 21,000-square-feet facility features eight music rooms, three dance studios, two classrooms, a recording studio and a 120-seat theater, as well as the Monkey Business Café and the Arts OC office.