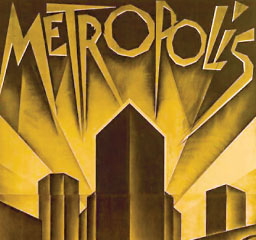 Experience a cinematic tour de force when Pacific Symphony showcases the newly restored version of Fritz Lang’s fascinating, iconic, sci-fi masterpiece, “Metropolis,” the 1927 silent film that influenced such mega-hit films as “Star Wars” and “Blade Runner.” Projected on the big screen as organ virtuoso Peter Richard Conte performs the unforgettable soundtrack live, this promises to be a highly unique symphonic afternoon at the movies. High on every list of the most important movies ever made, “Metropolis” is a fusion of elements that are both of its era and shockingly contemporary. The acting is expressionistic, the story is allegorical in its messages about class inequality and the power of love, and the music played an unusually important role for its time.

Thanks to the power of its story and stunning scenic design, this classic film remains timeless. Featuring the one-of-kind William J. Gillespie Concert Organ, performed by Conte, who celebrates his 25th year as Wanamaker Grand Court Organist (Philadelphia), “Metropolis” takes place Sunday, March 12, at 3 p.m. in the Renée and Henry Segerstrom Concert Hall. Tickets are $10-$50. For more information or to purchase tickets call (714) 755-5799 or visit www.PacificSymphony.org.

Lang created one of the most unforgettable original places in cinema, “Metropolis,” which set the image of a futuristic city as a hell of material progress and human despair for countless films to follow. Movies have continued to draw directly upon the classic film when they challenge the audience with realistically human androids, as in “I, Robot,” “Blade Runner” and “Total Recall,” or when they present a futuristic dystopia where underprivileged masses are oppressed by a privileged ruling class—as in “The Hunger Games,” “Soylent Green” or “Gattaca.” From this film, in various ways, descended also “The Fifth Element,” “Alphaville,” “Escape from L.A.” and Batman’s Gotham City.

The laboratory of its evil genius Rotwang created the visual image of mad scientists for decades to come, beginning with the 1935 movie, “Bride of Frankenstein.” The device of the “false Maria,” the robot who looks like a human being, inspired the Replicants in “Blade Runner.” Even Rotwang’s artificial hand was given homage in “Dr. Strangelove.” All of the questions that grip the audience in these films were first posed in “Metropolis,” delivered in a spectacular vision of the future that’s never been surpassed.

Existing in a variety of different versions and lengths after its original release, “Metropolis” included a score that was given special attention by Lang, who regarded the music as crucial, and he commissioned an original score by Gottfried Huppertz. Back then, musicians usually gave a score its final shape when accompanying showings in the theater, but Lang made certain that Huppertz was present on the film set with a piano available to set the mood he wanted for his actors. Though Huppertz’s initial score was for full orchestra, it was understood from the beginning that an organ version was equally consistent with the director’s intentions; both are considered “original” scores. The score performed by organist Conte for the Symphony’s presentation is based on the original score for organ.

Huppertz’s experience as an opera singer informed his ability with motifs, a vital element in the score for “Metropolis.” His familiarity with operatic emotions and ideas was also an asset, since the film combines deeply philosophical ideas with an intensely episodic love story. All of these elements can be heard in Huppertz’s musical ideas.

Down through the centuries, the large-scale theater and concert organ has stood as a remarkable example of advanced technology. The sound produced by air rushing through miles of pipes, both huge and otherworldly, fits the futuristic vision of “Metropolis.” The vast range of tones at the command of a single individual serves as an example of the power of mechanization that the audience experiences firsthand while watching and listening to the movie.

“Metropolis” tells of a towering city of the future, which above ground has spires and towers, elevated highways, an Olympian stadium and Pleasure Gardens. But below the surface is a workers’ city where people live in tenement housing and work consists of unrelenting service to a machine. This vision of plutocracy versus labor was powerful in an era when the assembly line had been introduced on a large scale and Marx had encouraged class warfare. In essence, Lang serves up a futuristic city as a hell of material progress and human despair.

Among the inspirations for “Metropolis” was Lang’s first glimpse of the New York City skyline, which overwhelmed him. Lang saw it in its duality, both heroic and frightening: “The film was born from my first sight of the skyscrapers in New York in October 1924…I looked into the streets—the glaring lights and the tall buildings—and there I conceived Metropolis… The buildings seemed to be a vertical sail, scintillating and very light, a luxurious backdrop, suspended in the dark sky to dazzle, distract and hypnotize. The sight [of New York] alone should be enough to turn this beacon of beauty into the center of a film.”

After seeing the newest version of “Metropolis,” film critic, Roger Ebert in 2010 wrote: “The opening shots of the restored “Metropolis” are so crisp and clear they come as a jolt. This mistreated masterpiece has been seen until now mostly in battered prints missing footage that was, we now learn, essential. Because of a 16mm print discovered in 2008 in Buenos Aires, it stands before us as more or less the film that Fritz Lang originally made in 1927. It is, says expert David Bordwell, ‘one of the great sacred monsters of the cinema.’”

Lang was born in Vienna in 1890, a time when that city was a hotbed of intellectualism, the city of Freud and Mahler. The ideas were stimulating but the mood was dark; it was a period when industrialization, urbanization and a general sense of uncontrolled change threatened the way of life that Europeans thought would last forever. Unease only intensified after the horrors of World War I seemed to confirm everyone’s worst fears. It was in 1918 that Lang turned to filmmaking and his initial work as a theatrical writer.

In 1920 Lang met the woman who would become his wife and collaborator on all of his films through 1933—Thea von Harbou—a writer and actress who had written a number of critically respected novels. She wrote the book version of “Metropolis” to serve as a platform for a film version to be directed by Lang, but framed it with a literary sensibility that showed an awareness of sources such as Mary Shelley, the Czech writer Karel Capek (who coined the word “robot”) and H. G. Wells.

As the Wanamaker Grand Court Organist, Conte is only the fourth person to hold that title since the organ first played in 1911. He performs concerts twice daily, six days each week, on the largest fully functioning musical instrument in the world. Conte is also principal organist of Longwood Gardens, Kennett Square, Penn., and, since 1991, has served as choirmaster and organist of Saint Clement’s Church, Philadelphia. He is highly regarded as a skillful performer and arranger of organ transcriptions. He has two radio shows: “The Wanamaker Organ Hour” and his Grand Court concert is streamed live on YesterdayUSA.com. Conte performs extensively throughout the U.S. and Canada, and has appeared as a featured artist at American Guild of Organists’ National and Regional Conventions.