Awe-inspiring Songs of Praise and Exaltation Ring Out for “Handel’s Glorious Messiah” when Pacific Symphony is Joined by Heavenly Voices for a Triumphant Holiday Celebration! 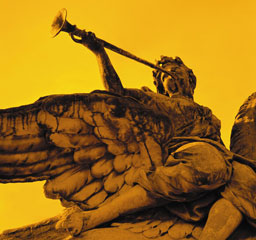 Full of exciting choral writing, thundering timpani and blazing trumpets, “Handel’s Glorious Messiah” energizes its audience and leaves them singing, “Hallelujah!” This beloved holiday tradition of Handel’s celebrated oratorio provides the perfect respite during the busy season to experience joy, reflection and renewal. Rejoicing in the inspired melodies and theatrical mastery each year, Pacific Symphony performs the Baroque masterpiece as a festive prelude to Christmas and the celebration of Christ’s birth. Loved across the world, “Messiah” has been performed for almost 275 years, but with each performance, it becomes a fresh and newly invigorating experience. This year, conductor George Hanson takes the reins to lead the orchestra along with Pacific Chorale (John Alexander, artistic director) and a quartet of globally distinguished soloists—soprano Shannon Mercer, mezzo-soprano Renée Tatum, tenor John Bellemer and baritone Stephen Bryant.

“Conductor George Hanson, protégé of Leonard Bernstein, clearly inherited his mentor’s expressive talents: dynamic energy flowed through his fingers as he conducted the Orchestre Philharmonique de Nice… Hanson and the orchestra exalted in the musical themes with extraordinary musicality,” read a review in Nice Matin.

In 2013, Lynn René Bayley wrote of the evening’s featured soprano in Fanfare, “I was immediately captivated by Mercer’s singing and could not stop listening or write a single word of comment until the entire cycle was finished. Yes, she’s that good… Every phrase is caressed so lovingly, the music emerging from her throat with a pearl-like shimmer and the dynamic changes so tastefully and subtly applied, that she makes each a special event… You keep waiting for the spell to break, but it never does. This is the work of a master artist.”

The Winnipeg Free Press praised the tenor: “Bellemer introduced the chorale with his soaring, recitative evocation… The four soloists presented as a remarkably well-blended ensemble throughout, with Bellemer a particular standout with ringing high notes and legato phrasing.”

“This is my first time conducting Pacific Symphony,” says Maestro Hanson. “Whenever musicians get together for the first time to do a work we all know, we often have the sense that we have something special in common—the music is our ‘mutual friend.’ Ideally, we have the sense that we’ve known each other for a long time. I’m looking forward to sharing this great work with the musicians of Pacific Symphony!”

Handel was born at the peak of the Baroque era, and he produced many operas before creating “Messiah,” which he compiled solely with biblical references. He was known as the “master of sacred and secular music,” and his talent of composing for voice and instrument shines in this most famous oratorio. With exceptional soloists, a superb chorus and exemplary orchestra, it is always a moving experience to tell the ancient story of Jesus’ life, expressed in a most personal artistic statement by Handel, who had just recovered from a stroke when he set the words for “Messiah” to music; his gratitude for having regained his health again can be deeply felt in the music. His genius in this piece seems as though it is “divine inspiration,” with a clear message of religion and exclamation of God’s glory.

“Great music is a conduit, a connection that reaches directly into the human heart,” says Hanson. “We experience this every time we hear an old song and it takes us back to a time and place, recalling a special memory or a moment with a loved one. When Handel used his creative genius to combine the power of music with ‘The Greatest Story Ever Told,’ history was made.”

Hanson calls “Messiah” “a work of art that ties our civilization together through the ages.” As the composer was creating his masterpiece, it’s hard to imagine he could have foreseen the impact it would have over three centuries. This work has the great spiritual depth of a liturgical masterwork, but as Handel was also one of the most prominent opera composers of his time, it also contains the drama and excitement of a fascinating and thrilling story. In a performance, it can be a uniquely moving experience when performers unite in one musical spirit and reach out to the audience.

“Even as ‘Messiah’ connects us with our past, it also connects us with each other,” Hanson continues. “This is the key to the work’s enduring success: the shared experience of listening together, being inspired together, being lifted together by the beauty of the music, the drama of the story and the meaning of the text. It is a joy to see how this great music had become part of everyone, how it exists inside all of us who have had the good fortune to experience it.”

In this year’s rendition, Hanson aims to keep the piece sounding new, and says: “As ‘re-creative artists,’ musicians and conductors seek to communicate the wishes of the composer. But each of us is also inspired in different ways, through our personal experiences and influences, leading us to different interpretations of the same written notes. Personally, my approach to this masterpiece begins with the style: How did the composer imagine it would be played? I had the privilege of assisting the great choral master Robert Shaw in his preparations of ‘Messiah’; his approach inspired me to look deep into the meaning of the text and how it is reflected and its understanding enhanced by Handel’s music.”

Hanson is a symphony and opera conductor, pianist, recording artist, television host, educator, community leader, fundraiser and passionate spokesman for the arts. Since first drawing international attention with First Prize wins at the Budapest and Stokowski conducting competitions, Hanson’s career has taken him to more than 20 countries, conducting over a 100 orchestras and operas on five continents.

Hanson served for seven years as assistant to Leonard Bernstein and five years for Kurt Masur. He trained at Vienna’s Hochschule für Musik, Italy’s Accademia Chigiana, Tanglewood and the Curtis Institute. Recently named guest conductor/artistic advisor of Orquesta Filarmónica de Sonora in Hermosillo, Mexico, Hanson is also festival director of the Tucson Desert Song Festival and artistic director of the Sunriver Music Festival in Oregon. He was music director of the Tucson Symphony from 1996-2015, and in six seasons as general music director of the Wuppertal Symphony and Opera in Germany, Hanson oversaw nearly 50 opera productions. Of his “Don Giovanni,” the Rundschau wrote: “The success of the evening was due primarily to the conducting of George Hanson. The phrasing with the singers was nuanced and differentiated, perfectly balanced with the orchestra.”