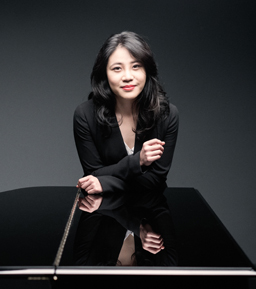 A Pacific Symphony Piano Masterclass led by the gifted, imaginative and electrifying performer, Zhang Zuo, is providing an exciting opportunity for three lucky non-professional pianists—one high school student, one college student and one adult (age 22+) non-professional musician. Zuo (who goes by the nickname, “Zee Zee”) not only makes her Pacific Symphony debut with Beethoven’s mighty Third Piano Concerto on March 23-25, but she will be inspiring and sharing her expertise during the Masterclass held March 22. The dynamic young pianist has been described by the Los Angeles Times as “a powerful, passionate and compelling representation of pure artistry.”

“This is a great opportunity!” says the Symphony’s community arts participation manager, Kelli Rust. “Three people in different stages of their musicianship will be able to work one-on-one with one of Pacific Symphony’s award-winning guest artists. This is not only a valuable opportunity for the pianists on stage, but also for the musicians in the audience, as they observe and take note of practice and performance tips they can take back to their own playing."

The three participants who benefit from Zuo’s musicianship during the Masterclass will be selected by a panel of Symphony staff, musicians and volunteers, based upon their musicianship as demonstrated by a submitted recording. Those wishing to be considered are asked to submit to the Symphony a completed application form and recording of the same piece or movement to be played during the Masterclass—no later than 4 p.m. on Feb. 15. Three musicians will be notified of their acceptance by March 1. Registration forms and details can be found at: www.pacificsymphony.org/masterclass

The recording should be no longer than 10 minutes and can be submitted on CD, DVD or via Internet link (e.g., YouTube or Vimeo). Although these do not need to be professional recordings, the audio should be of a quality that best represents the applicant’s playing. Audition recordings should be clearly labeled with the applicant’s name. CDs and DVDs will not be returned, and the decision of the judges is final. Applications/recordings should be submitted via email to krust@pacificsymphony.org or mailed to: Kelli Rust, Pacific Symphony, 17620 Fitch Avenue, Suite 100, Irvine, CA 92614.

“This is such a valuable experience for both the students and the audience as they experience or observe the process of one of the Symphony’s talented guest artists,” says Rust. “Learning from a world-renowned professional at different stages of one’s musicianship can help to shape practice time as they advance in their skills and develop as a musician.”

Think of it as sharing a piano lesson with an audience. During the Piano Masterclass, each of the three chosen students will play their piece or movement and then receive feedback and coaching from the master teacher; each performer will spend about 30 minutes on stage with Zuo. Open to the public, this Masterclass takes place on Wednesday, March 22, 7-9 p.m., in the Samueli Theater, at the rear of the Renée and Henry Segerstrom Concert Hall. Tickets are $10 and advanced reservation of tickets is highly encouraged. To purchase tickets, call the box office at (714) 755-5799 or visit www.PacificSymphony.org.

Last year, the Symphony’s guest artist and highly acclaimed violinist, Cho-Liang (Jimmy) Lin, led a Masterclass for the Symphony that was a hit with the participants and audience alike. Chloé Tardif, one of the community musicians taking part, said: “The Masterclass with Mr. Lin was a wonderful chance to perform, learn and develop my playing for an audience, which created an environment that was simultaneously challenging and inspiring.”

This year’s master teacher, Zuo, began her musical training in Germany at age 5. Upon returning to her native China, she became one of the most sought-after young artists in the nation, collaborating with leading Chinese orchestras. Having completed her piano studies at the Shenzhen Arts School, Zuo was invited to continue her artistic development at the Eastman School of Music and at The Juilliard School, where she won the coveted Petschek Piano Award. She has also received first-prize at China’s First International Piano Concerto Competition, the Gina Bachauer International Artists Piano Competition in America, and the Krainev International Piano Competition in Ukraine; plus, she was a prizewinner at the 2013 Queen Elizabeth Competition.

Pacific Symphony strives to improve the quality of life in Orange County by providing people of all ages and circumstances with lifelong musical experiences and opportunities to participate in the creative process. Each year, more than 50,000 community members throughout Southern California benefit from these programs.

This event is made possible through the support of The James Irvine Foundation and the New California Arts Fund.