It’s an Adventurous Musical Romp Back to the Days of “King Arthur and the Legend of the Dragon’s Lair” for Pacific Symphony’s Next “Family Musical Mornings” Concert! 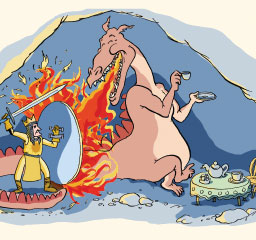 Journey back in time to the wondrous kingdom of Camelot, where gallant knights and fair damsels rule the land! Pacific Symphony’s “Family Musical Mornings” concert—“King Arthur and the Legend of the Dragon’s Lair”—is a rollicking ride, full of adventure, heroism, danger and excitement! With advice from the wise, old wizard, Merlin, King Arthur hunts the dragon in a dangerous quest that is the stuff of legend! Led by Assistant Conductor Roger Kalia and featuring the gifted young musicians of Pacific Symphony Youth Orchestra (PSYO) in their annual side-by-side concert with the Symphony, “King Arthur” is packed with thrilling music from John Williams’ “Raiders of the Lost Ark” to Rossini’s “William Tell” Overture,” Wagner’s Prelude to “Die Meistersinger,” Respighi’s “Church Windows” and Overture to Glinka’s “Ruslan and Lyudmila.”

“The Legend of King Arthur and the Knights of the Round Table is a universally known story that has been passed down by generations,” notes Maestro Kalia. “The story with the characters such as King Arthur, Merlin, the Dragon and Guinevere, lends itself to music that is heroic, majestic and, most of all, exciting. I think our audience will be captivated by how the characters interact and the way the music is intertwined. There will be plenty of audience engagement, including learning how to conduct.”

This Family Musical Mornings concert, presented by Farmers & Merchants Bank, is a kid-friendly (especially ages 5-11 but enjoyed by all), 45-minute concert featuring actors and a dragon (!) that takes place on Saturday, March 25 at 10 a.m. and 11:30 a.m., in the Renée and Henry Segerstrom Concert Hall. Tickets are $25-$50. For more information or to purchase tickets, call (714) 755-5799 or visit www.PacificSymphony.org.

Families should plan to arrive early or stay late for the Musical Carnival, which begins at 9 a.m. (for the 10 a.m. concert) and 12:15 p.m. (for the 11:30 a.m. concert) in the concert hall lobby, where children and families are invited to participate in interactive musical activities that are both fun and educational. Participants enjoy an instrument test drive, have an opportunity to ask questions of the orchestra, and meet musicians from Pacific Symphony and PSYO. The “Spotlight Instruments” for this concert are the orchestra’s woodwinds.

“We are going to perform an eclectic program featuring works by John Williams, Wagner, Respighi and Glinka, among others,” says Kalia. “The music is heroic and adventurous yet lyrical and beautiful. Wagner’s ‘Meistersinger’ Prelude is grand and majestic, while Respighi’s ‘Church Windows’ will highlight the brass. The entire orchestra will be featured on all of the works, with a special emphasis on the woodwinds. The flute will take on a magical quality in the overall story.”

Music from Williams’ “Raiders of the Lost Ark” score remains one of the most instantly recognizable themes in cinema history. Echoing both the mysticism surrounding it and the dangers it holds, the music is at times soft, while at other times it soars skyward. The audience knows precisely what it’s supposed to feel at any time. It’s a truly immortal theme that gives “King Arthur” just the touch of grand adventure it needs. The other pieces on the program contain similar heroic qualities, including the “William Tell” Overture, which was written to open Rossini’s opera based on the legend of the Swiss hero, a bow and arrow expert who shot an apple off his son’s head. Rossini considered the opera his masterpiece, but due to length and concerns that the story was glorifying a revolutionary, it flopped. Later the overture struck gold and became Rossini’s best-known work when the finale became the theme to “The Lone Ranger.”

The nobility of character that Wagner ascribes to “Meistersinger’s” dramatic “hero” is suggested at the outset of his Prelude, which opens with a heraldic theme in which the prominence of the brass foreshadows its prevalent use throughout, while the second movement of Respighi’s “Church Windows” alludes to St. Michael the Archangel fighting a dragon in heaven, with an opening glissandi in the strings and a fanfare in the brass that are references to

Wagner. Glinka’s “Ruslan and Lyudmila” could be described as an epic frolic—a lush yet lighthearted romp through a world of fantastic adventures and fairytale love. The story sweeps its way across the vast Russian landscape, depicting a furious conflict between good and evil.

With a script by Joe Lauderdale, this concert is based on the famous, timeless myth of Camelot, that imaginary place made famous in plays and movies. The great castle of King Arthur, Camelot symbolized the Golden Age of Chivalry and was said to be located in Great Britain during the 13th century, where it was the seat of power for the land. Populated by such legendary characters as Arthur and his queen, Guinevere, the wizard Merlin and Sir Galahad, the castle was the center of the Kingdom of Logres, and in Arthurian legend would become the location of the table that held 150 knights, famously known as the Knights of the Round Table.

The Symphony’s spin on the story of Camelot picks up after Arthur has been named King and Guinevere has become his Queen. It’s a time when many rumors are floating around the kingdom about a frightening dragon and the destruction it has caused. Still, all is well—until Guinevere suddenly disappears, and it is suspected that the dragon has kidnapped her! That’s where Arthur’s adventure begins. With advice from his trusted advisor, Merlin, King Arthur heads off on a dangerous mission to hunt down and slay the dragon in order to save the magic kingdom.

Kids are sure to delight in the sight of the magical dragon and should watch for the appearance of the legendary sword, Excalibur. Maestro Kalia, who during the concert is knighted and given a very special title in Camelot, says: “I will take on the role as a Knight of the Round Table, and more specifically, as the Defender of Music for all in the Kingdom. My baton technique will serve me well as I use the Sword of Excalibur to find the Dragon using the power of the orchestra!” Yes, but will Arthur save his kingdom? Find out at the concert!