Pacific Symphony’s Final Grand Summer Festival at Irvine Meadows Amphitheatre Gets Off to a Firecracker Start with July 4 Spectacular and The Music of Michael Jackson! 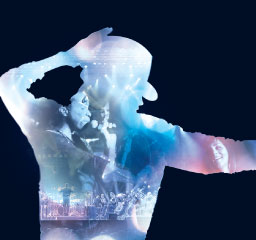 It’s sure to be a “thriller”—when Pacific Symphony’s blockbuster Summer Festival 2016 kicks off its final season at Irvine Meadows Amphitheatre with a “July 4 Spectacular,” featuring a symphonic tribute to Michael Jackson’s music. The first of five exceptional musical experiences under the stars, the Symphony’s holiday extravaganza begins with picnic baskets packed with goodies and the company of family and friends—all just a prelude to a celebratory, rockin’ good time with the orchestra and guest band, Windborne, whose lead singer James Delisco brings to life the genius of Michael Jackson. Showcasing the best-known hits of the legendary “King of Pop”—from The Jackson 5 to the singer’s final film, “This Is It”—the concert includes music from the albums “Off the Wall,” “Thriller,” “Bad,” “Blood on the Dance Floor” and much more. Traditionally the best-attended concert of the year, this holiday celebration also honors American heroes and includes a moving fireworks finale orchestrated to patriotic classics.

Taking place Monday, July 4, at 8 p.m. (gates open at 6 p.m. for picnicking), the concert is led by Principal Pops Conductor Richard Kaufman and marks the beginning of the Symphony’s final season at Irvine Meadows before the venue closes (new location to be announced). Designed to evoke the memories of the last three decades with exhilarating and iconic music, this special season promises to be both exceptional and sentimental, as the Symphony bids a fond farewell to its summer home of the last 29 years.

Subscriptions for Summer Festival 2016 range from $100-$485 with boxes and front-row packages also available. With the purchase of an adult subscription, one child under 14 comes free in select sections. Single tickets are $25-$108. And new this year: the award-winning caterer 24 carrots is on site to serve up an all-new menu of delicious gourmet options (from simple to elaborate) for pre-concert dining. For more information or to purchase tickets, call (714) 755-5799 or visit www.PacificSymphony.org.

“We have one more season under the stars in our summer home and it begins with an exciting 4th-of-July celebration of our great country,” says Maestro Kaufman. “Irvine Meadows has always been a place for families to gather to enjoy the beauty and excitement of great music, and this coming July 4th will once again offer a joyous celebration for all ages. The audience will be on its feet, dancing and singing along to the music of Michael Jackson!

“Michael was an amazing performer, and it was all driven by his music,” he continues. “He was an important part of the American musical history, and it’s exciting to be able to present his music on our July 4th program and remember this tremendously talented entertainer. And with the amazing fireworks finale, there will be no doubt that it’s the birthday of the U.S.A.!”

The first half of the concert is chockfull of upbeat, feel-good music delivered by the orchestra. The evening begins with Mancini’s March from the movie, “The Great Waldo Pepper,” followed by the “National Emblem March” and “Star Spangled Banner.” Among the other popular tunes are Gould’s “American Salute,” a “George M. Cohan Overture,” “Ohio Riverboat,” “Century of Flight,” “Victory at Sea” and “Rock Around the Clock.” The program also includes “America the Beautiful,” “Washington Post March,” “Semper Fidelis,” “Stars and Stripes Forever” and the Symphony’s annual moving tribute to the U.S. Armed Forces.

“To celebrate the birth of our country under the stars with Pacific Symphony is such an exciting and moving experience, both for the audience and the performers,” Kaufman says. “On this very special day, it is more than appropriate that we stop and remember what a gift it is to live in a land of freedom.

“Both my father and my father-in-law served in the Armed Forces, as did many of our audience members,” he says. “When we play all the marches of the various military branches, we honor those who have served, and are serving, as well as their families. It’s a moment in the concert that is, in a word, thrilling.”

And speaking of thrilling…be prepared to believe Michael Jackson is back among the living! The second half of this concert is all Michael Jackson music—headlined by Windborne’s Delisco. Crowned “The Entertainer” by Mr. Las Vegas himself, Wayne Newton, on the E! Network’s reality TV series, Delisco has proved he is more than worthy of the title. An iconoclastic performer with extraordinary energy, Delisco conjures Michael Jackson before the audience’s eyes for this “thriller” of a concert. Band members add a wonderful mix of harmonies (and a couple of leads) with Delisco as the orchestra soars behind tunes such as “Man in the Mirror, “Earth Song,” “Ben,” “Beat It!” and many more.

“Our first live production of classic rock music with orchestra was in late 1995—The Music of Led Zeppelin,” says Windborne’s founder Brent Havens. “After the initial response from that show we realized this was something that had the potential to spread throughout the country.” That’s exactly what happened, and 12 different shows later, Windborne has traveled the world touring The Music of Led Zeppelin, Pink Floyd, The Eagles, The Doors, Queen, The Who, U2, Whitney Houston, the Rolling Stones, Journey and Michael Jackson with orchestras great and small. We’re looking to the future to keep Windborne on the cutting edge.”

Windborne has proven to be popular with Pacific Symphony’s audiences during several memorable July 4 concerts where music legends returned to the stage for one awesome night.

Kaufman says: “There are so many moments that are etched in my memory when it comes to the July 4th concerts we’ve presented at Irvine Meadows. For me personally, it was beyond special to have my daughter, Whitney, sing the National Anthem one year. And to see my father standing in the audience during our salute to the U.S. military was always an incredibly emotional moment for me.  And of course it’s been exciting to perform with all the talented guest artists, and most certainly, with my friends and colleagues in the orchestra.”

Summer Festival 2016 is made possible by official sponsor Avenue of the Arts Hotel and media sponsors PBS SoCal, K-Earth 101, KPCC and KUSC.