Don’t Get Left “Home Alone”! All The Action, Music and Hilarity are at the Concert Hall when Pacific Symphony Pops’ Night at the Movies Stars John Williams’ Irresistible Score!

The orchestra performs the score live as the movie is shown on the big screen! 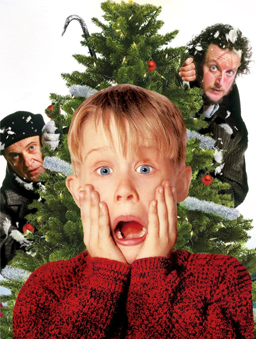 The music may not be the first thought that comes to mind when it comes to the hit 1990 movie, “Home Alone”—the highest-grossing live-action-comedy film of all time in the U.S.—but it will soon! It’s not just another “movie night” when Pacific Symphony’s Pops brings the exemplary “Hollywood” sound of the orchestra to the hilarious and heart-warming comedy classic starring Macaulay Culkin as 8-year-old troublemaker, Kevin McCallister. What makes this movie event especially memorable is John Williams’ captivating score, performed live by the Symphony, as the film is shown on the giant screen above the stage! When led by Principal Pops Conductor Richard Kaufman, whose talent for performing movie scores has become a true specialty, the novelty of a live orchestra accompaniment never wears off—it just elevates the experience.

(Warning: All signs of maturity should be checked at the door—sit back and laugh your head off, but take a Kleenex too.) “Home Alone” takes place Friday-Saturday, Nov. 11-12, at 8 p.m., in the Renée and Henry Segerstrom Concert Hall. Tickets are $35-167; $195 Box Circle. For more information or to purchase tickets call (714) 755-5799 or visit www.PacificSymphony.org.

“In any film that includes a score by John Williams, the music plays a crucial part in its success,” says Maestro Kaufman. “ ‘Home Alone’ is a perfect example of how the music created the uplifting spirit of the film, which told the story of Kevin, the little boy who was left all by himself as his family flew off on vacation. Williams’ music captured and helped to create the fun, excitement, nostalgia and beauty of this joyous motion picture.

“I love conducting film scores in concert, and this is really an extension of my career conducting actual scores in the studios,” Kaufman continues. “Having played violin in the studios for many years, it is so exciting to have the opportunity to play a part bringing this incredible music to life in the concert hall. I have had the great joy of conducting the music for ‘Home Alone’ with the Chicago Symphony Orchestra. The audience reaction was truly amazing...almost as if it were a live play with music.”

Written and produced by John Hughes and directed by Chris Columbus, the story of “Home Alone” begins when 8-year-old Kevin acts out the night before a family trip to Paris and his mother (Catherine O’Hara) makes him sleep in the attic. After the McCallisters mistakenly leave for the airport without him, Kevin awakens to an empty house and thinks his wish to have no family has come true. Kevin initially relishes being home alone, but his excitement evaporates when he realizes that two burglars (Joe Pesci, Daniel Stern) plan to rob his family’s home, and that he alone must protect it. (For his role, Culkin was nominated for the Golden Globe Award for Best Actor—Musical or Comedy.)

But the real sentimental moments in the film—Kevin’s loneliness at being abandoned on Christmas Eve—are underscored by the remarkable music composed by the reigning king of movie music, Williams. It doesn’t make the slapstick funnier so much as it makes the human moments in the film what they are, and it brings out the child in everyone. It is only after hearing Williams’ score that anyone realizes just how integral it is to the film. The soft, memorable tones of “Somewhere in My Memory” help to make “Home Alone” a truly delightful, fulfilling viewing experience. Without music, “Home Alone” would be mostly sad.

“In a traditional film, whether it be a comedy, drama or other genre, the music underscores the action,” says Kaufman. “In a musical film, there is not only underscore but also songs to accompany, which makes the conductor’s job similar to conducting a Broadway show. The challenges of conducting the music to any film include the synchronization of the music to the film, and of course capturing the required style of the film itself. As an example, the darkness of the movie ‘Psycho’ is in great contrast to the joy and lightness of ‘Singin’ in the Rain.’ ”

Since a film score is written to accompany the drama and action in a movie, presenting music in a concert requires the conductor to know the movie in minute detail and make certain the music matches. The live performance of a film score involves a meticulous digital process: the musical soundtrack must be removed from the film, while leaving the dialogue and sound effects untouched; the instrumental parts must be reconstructed by the orchestra as the music is performed live, in sync with the film’s visual storyline. Using a large clock with a second hand as well as a click track, Kaufman is able to keep the orchestra perfectly in sync with the film. The result is something you can’t get from watching a movie anywhere else.

“I have had the great good fortune to conduct numerous film scores in concert to live film,” Kaufman notes. “And happily, many of these have long been among my personally favorite motion pictures. They comprise many different genres of storytelling and film making, and the scores have been created by some of Hollywood’s finest creators. Every score that we have presented with a film is an exciting and different adventure.”

Among the films that Kaufman has conducted live with Pacific Symphony are “Singin’ in the Rain,” “Vertigo,” “Pirates of the Caribbean,” “Casablanca,” “The Wizard of Oz,” “Star Trek (2009),” “Ben-Hur” (silent), “Phantom of the Opera” (silent) and “Raiders of the Lost Ark.” He has also performed the scores for “E.T.,” “Psycho,” “On the Waterfront,” “Amadeus,” “City Lights” (silent), “Bride of Frankenstein,” and the world premiere of “Star Trek Beyond”—with more to come!

After reviewing “Star Trek (2009),” Tim Mangan wrote in The Orange County Register: “Principal Pops Conductor Richard Kaufman, an old hand at this type of thing, was on the podium and made it look easy, synchronizing seamlessly with the film. Pacific Symphony had to play gobs of music and did so indefatigably, also athletically.”

Capturing “Home Alone” in music is Williams, whose career spans five decades. He has become one of America’s most accomplished composers for film and concert stage, and remains one of its most distinguished musical voices. Williams has composed the music for more than 100 films, including all seven “Star Wars” films, the first three “Harry Potter” films, “Superman,” “Memoirs of a Geisha” and “The Book Thief.” His 40-year artistic partnership with director Steven Spielberg has resulted in many of Hollywood’s most acclaimed films, including “Schindler’s List,” “E.T. the Extra-Terrestrial,” “Jaws,” “Jurassic Park,” “Close Encounters of the Third Kind,” “Saving Private Ryan,” and “Lincoln”—plus, all of the Indiana Jones movies. In 2016 he received the 44th Life Achievement Award from the American Film Institute – the first time a composer was honored with this award.