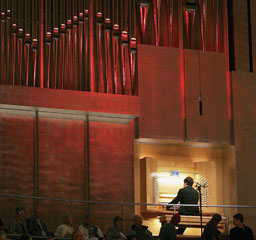 Revel in the joy and splendor of the holidays with the resounding voice of the William J. Gillespie Concert Organ—the visual focal point of the Renée and Henry Segerstrom Concert Hall—during Pacific Symphony’s annual “Holiday Organ Spectacular.” The color, beauty and versatility of the organ, performed by Todd Wilson, one of the most highly regarded concert organists, comes together with Symphony musicians (Barry Perkins, trumpet; Mindy Ball, harp; Paul Manaster, violin; Timothy Landauer, cello; Elliott Moreau, bassoon; and Robert Slack, percussion) to spotlight the best of treasured Christmas classics. Curator of the E.M. Skinner pipe organ at Severance Hall in Cleveland and frequent Symphony performer, Wilson returns to play the $3.1 million concert organ created by C.B. Fisk at this annual holiday event featuring a thrilling mix of classical and popular Christmas carols.

“I enjoy this concert year after year because of the special opportunity to collaborate with some of the outstanding musicians of Pacific Symphony and to play a magnificent organ in a beautiful concert hall,” says Wilson. “The thrilling sonorities of this great Fisk pipe organ, along with these superb instrumentalists playing a wide variety of music for the holiday season, makes this a highly enjoyable event for listeners of all ages. It’s a unique opportunity for all of us!

“This year’s program will feature exciting organ solos, along with many selections for the organ in partnership with Symphony musicians,” Wilson continues. “ The audience can look forward to experiencing the power and beauty of the pipe organ in combination with these different instruments, all playing the most beloved tunes of the holiday season. We have several wonderful new arrangements for this year’s program.”

This festive concert features beloved Christmas tunes that warm the heart and create the feeling of both good cheer and reverence, including an interpretation of Bach’s “In Dulci Jubilo,” “The First Noel,” “Sussex Carol,” “Emmanuel,” “Pastoral Scenes,” “Let it Snow,” “Ave Maria,” “Dance of the Sugar Plum Fairy” from “The Nutcracker” and the Hallelujah Chorus from “Messiah”—all on the first half! This magnitude of musical splendors continues during the second half with “Variations on an Old Carol,” “Greensleeves,” “I’ll be Home for Christmas,” “I Saw Three Ships,” “Sleigh Ride” and “Little Drummer Boy”—as well as an opportunity for the audience to sing along during two of the most beloved holiday classics of all: “Silent Night” and “Joy to the World.”

A hit with audiences and critics alike, Wilson “is an extraordinary, intrepid performer with immense technical capability and solid musicianship,” according to The American Organist. And while The Plain Dealer calls him “a fabulous virtuoso with fleet feet, a prodigious memory and technique to burn,” the Birmingham News claims he’s “a master tonal colorist…[displaying] consistent security on both the manuals and pedals.”

“When I first experienced pipe organs as a young boy, I thought of organ consoles and airplane cockpits as being almost interchangeable—I was fascinated with all the buttons, knobs and gizmos,” recalls Wilson. “Soon after that I started to fall in love with the almost limitless array of tone colors produced by the pipe organ—it is second only to a symphony orchestra in the range of color and dynamic possibilities.”

Acclaimed internationally for his virtuosity, Wilson is head of the organ department at The Cleveland Institute of Music and director of music and worship at Trinity Episcopal Cathedral in Cleveland. He also serves as house organist for the newly restored Aeolian organ at the Stan Hywet Hall and Gardens in Akron, Ohio. He has performed in major cities throughout the United States, Europe and Japan, including concerts at Symphony Hall in Birmingham, England, Walt Disney Concert Hall in Los Angeles, Orchestra Hall in Chicago, Severance Hall in Cleveland, Meyerson Symphony Center in Dallas and Uihlein Hall in Milwaukee. His CDs on the JAV label feature a live recital of American music from the National Cathedral in Washington and “Live from Severance Hall,” a concert of music for trumpet and organ.

The Pedals and Pipes series is generously sponsored by Barry and Valerie Hon.