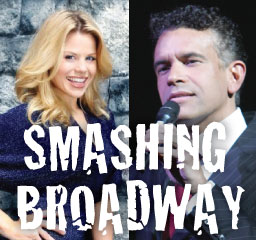 Pacific Symphony announces today that award-winning Broadway superstars Megan Hilty and Brian Stokes Mitchell will join the orchestra’s 2016-17 Pops season, replacing previously scheduled Jason Alexander, who was forced to cancel due to an unforeseeable conflict. With stunning voices and booming careers on Broadway, television and concert stages, Hilty and Mitchell join forces with the 88-piece orchestra to deliver an evening of soaring, feel-good music, led by guest conductor Albert-George Schram, April 21-22, at 8 p.m. in the Renée and Henry Segerstrom Concert Hall. Together, the talented performers bring fresh insight to a program of Broadway hits and unforgettable melodies that have become timeless standards—including music from Cole Porter, Duke Ellington and George Gershwin. Tickets are $35-$167 ($195 Box Circle). For more information or to purchase tickets, call (714) 755-5799 or visit www.PacificSymphony.org.

“With some very good fortune, we were able to secure outstanding replacements for our April Pops performances,” says Pacific Symphony President John Forsyte. “We are delighted to announce that Megan Hilty and Brian Stokes Mitchell, two extraordinary talents from Broadway, will share our stage. We are grateful to both performers and their management for arranging this engagement on such short notice, and look forward to hearing their thoughtful interpretations of cherished music from Broadway and the Great American Songbook.”

In high demand, the newly-formed duo headlined two major events this past fall—the Los Angeles Philharmonic Opening Night and the Grand Opening of the Eccles Theater in Salt Lake City—of which The Salt Lake City Tribune wrote “Mitchell was the ultimate showman, commanding the stage with his roof-rattling renditions of Broadway favorites.” Also dubbed “the last leading man” by The New York Times, Mitchell has received Tony, Drama Desk and Outer Critics Circle awards for his star turn in “Kiss Me, Kate.” He also gave Tony-nominated performances in “Man of La Mancha,” “Ragtime” and August Wilson’s “King Hedley II.” Other notable Broadway shows include “Kiss of the Spider Woman,” “Jelly’s Last Jam” and “Women on the Verge of a Nervous Breakdown.”

An extremely versatile and in-demand singer, Mitchell has performed at venues spanning jazz, opera, pops, country and musical theater worlds. He has worked with John Williams, Marvin Hamlisch, Keith Lockhart, Michael Tilson Thomas, Leonard Slatkin, The Smithsonian Jazz Masterworks Big Band, The Mormon Tabernacle Choir and The Muppets. Mitchell has made multiple appearances at Carnegie Hall beginning with his debut with the San Francisco Symphony through his televised performance in “South Pacific” opposite Reba McEntire to his sold-out solo concert, which he continues to perform throughout the U.S. He has been invited twice to perform at the White House and has performed for Presidents Clinton and Obama.

His latest recording, “Simply Broadway,” reimagines classic tunes but retains the spirit of the originals, and includes songs from “Camelot,” “Porgy and Bess,” “Company” and “Les Misérables.” His extensive screen credits began with a seven-year stint on “Trapper John, MD” and have continued with memorable appearances on everything from PBS’ “Great Performances” to “Frasier,” “Glee,” “Jumping the Broom” and his most recent recurring roles on “Madam Secretary,” “Mr. Robot” and the Hulu series, “The Path.”

Hilty has been hailed a star since her stunning 2004 Broadway debut opposite Idina Menzel in “Wicked,” as Glinda, led to her move to Los Angeles for the 2007-09 Pantages production and her prompt foray into television. In 2012, she joined the cast of the NBC series “Smash,” which was nominated for a Golden Globe for Outstanding Musical or Comedy Series. In 2013, she joined the cast of NBC’s “Sean Saves the World,” and has recently guest-starred on “Project Runway,” “Difficult People,” “Brain Dead” and “The Good Wife.”

During her hiatus between the first and second seasons of “Smash,” Hilty played “Lorelei Lee” in the New York City Center production of “Gentlemen Prefer Blondes.” Ben Brantley of The New York Times called the opening performance “one of those single, golden nights, so cherished by theatergoers that thrust its leading lady into the firmament of musical stardom.” Her 2009 role as Doralee in “9 to 5: The Musical,” Dolly Parton’s adaptation of the popular film, gained her nominations for Drama Desk, Outer Critics Circle, Drama League and Ovation awards. In 2015, she starred in a one-night-only performance of “Bombshell” and a two-night presentation of “Annie Get Your Gun” at New York City Center. She also returned to the Broadway stage as Brooke Ashton in “Noises Off.” For her performance, she received a 2016 Tony Award nomination for Outstanding Featured Actress in a Play, as well as Drama Desk and Drama League Award nominations.

Hilty has released three solo albums, “It Happens All the Time,” “Megan Hilty Live at the Café Carlyle” and “A Merry Little Christmas.” She maintains an active concert schedule, both with symphony orchestras throughout the United States and in solo concert at smaller venues.

Pacific Symphony’s Pops series is made possible through generous support from The Westin South Coast Plaza, PBS SoCal and K-EARTH.