Halloween with Harry Potter! Pacific Symphony Celebrates the Much-Loved Holiday with the Magic of Wizardly Music and Everyone’s Favorite Spectacled Hero and Friends! 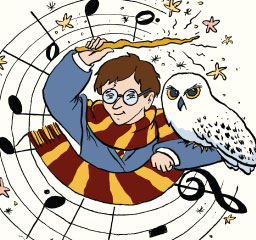 Hop on the Hogwarts Express! Young Witches, Wizards and Muggles unite as they find themselves transported to the fantastical world of Harry Potter, when Pacific Symphony’s Family Musical Mornings series returns just in time for Halloween. Featuring the beloved music of John Williams and more, this concert event is the perfect way to get a jump on Halloween (all are invited to come in costume!). Conjuring up this magical world are selections from the movie, “Harry Potter and the Sorcerer’s Stone”—including “Hedwig’s Theme,” “Harry’s Wondrous World” and “Nimbus 2000”—and yet more other-worldly music. Hosting the 45-minute musical extravaganza designed especially for kids 5-11 is the wondrous wizard, Assistant Conductor Roger Kalia, who, along with actors and a magician, takes the audience on an enchanting journey filled with symphonic sorcery.

“The Magic and Music of Harry Potter” takes place on Saturday, Oct. 22, at 10 a.m. and 11:30 a.m., in the Renée and Henry Segerstrom Concert Hall. Come early or stay late and join in the fun at the interactive Musical Carnival, where kids can test drive a musical instrument, meet the performers and enjoy musical arts and crafts activities themed to the morning’s concert. Activities begin at 9 a.m. for 10 a.m. concertgoers and 12:15 p.m. for 11:30 a.m. concertgoers. Family Musical Mornings season-ticket packages are $60-$160; single tickets are $15-$40. For more information or to purchase tickets call (714) 755-5799 or visit www.PacificSymphony.org.

“I respect J.K. Rowling immensely,” says Maestro Kalia, “and I can understand why the movies and books are so appealing to people all over the world. I absolutely adore the music of ‘Harry Potter.’ John Williams did an amazing job of capturing the moods and excitement of the movie plotlines and all of the characters. And since Halloween is only a few days after this concert, we are also going to perform works by Berlioz, Bach, Daugherty and Saint-Saëns to put the audience in the holiday mood.

“Halloween lends itself to exciting concerts with everyone dressing up in costume, including our musicians, who always have a great time on this concert every season. I’m always amazed at how the costumes inspire great music making. The concert hall will be transformed into a world with wizards, witches and magical creatures! I encourage everyone to wear their favorite Halloween costume!”

This exciting return to the world of magic and wizardry through the music of John Williams’ magnificent scores from the “Harry Potter” series also includes other music perfect for Halloween: Camille Saint-Saëns’ “Danse Macabre,” Hector Berlioz’s “March to the Scaffold” from “Symphonie Fantastique,” Michael Daugherty’s “Red Cape Tango” from the “Metropolis Symphony” and Johann Sebastian Bach’s “Tocatta y Fuga.” The concert spotlights the brass family of instruments as audience members learn how the families of instruments work together, similarly to the four houses at Hogwarts!

“The basic premise of our show is that the power and magic of music will be able to save us from a new Dark Wizard,” says Kalia. “My baton will become a magic wand during the concert and we’ll have a magician joining us, who will perform a variety of magic during some of our musical selections.”

For those who need reminded of the literary sensation that sparked a new love for reading in many children and adults alike… J.K. Rowling’s popular children’s novels (which were later adapted into big blockbuster films) began with “Harry Potter and the Sorcerer’s Stone,” a story about a boy who learns on his 11th birthday that he is the orphaned son of two powerful wizards and possesses unique magical powers of his own. He escapes his life as an unwanted child and becomes a student at Hogwarts, a Scottish boarding school for witches and wizards from around the U.K. There, he meets two friends who become his closest allies and help him discover the truth about his parents’ mysterious deaths. Since that first book, Harry has been through a lot with his two best pals, Ron Weasley and Hermione Granger. There has been adventure, heartbreak and even death, all the elements that have shaped Harry into the man he needs to be to face the dark and evil wizard, Lord Voldemort.

“I think audiences are able to connect with these characters,” says Kalia. “Rowling has the special ability to create unique personalities for each character that audiences can relate to. Likewise, “Rowling has made the ‘magic’ within her novels so believable. I feel that magic has become such a significant part of people’s lives, and the idea that anything is possible.”

The Symphony’s storyline takes place after the seventh novel and has Harry Potter sending Hogwarts music professor, Joseph Weasley, to Maestro Kalia and Pacific Symphony to stop a new, immerging dark wizard whose goal is to rid the world of the magic of music! Helping them do battle against the evil entity is Hogwarts’ student Lucy Hufflepuff (played by 13-year-old Charlotte Rubino, 8th grade student at Orange County School of the Arts in the Musical Theater Conservatory), in her seventh performance with the Symphony. Playing the part of Weasley and adding to the spectacle is illusionist Joseph Réohm (first-season winner on the television series “Wizard Wars”), who confounds and transfixes with his wizardly abilities! Ronald M. Banks—the Percussionater in the 2015 Family concert “Superheroes!” and the voice of Quan Chi in the video game, “Mortal Kombat X”—returns to his villainous roots with the Symphony in his role as the Dark Wizard. Serving as director and scriptwriter is Symphony favorite, Joe Lauderdale, who most recently took part in last season’s “Symphony in Space.”

The “Harry Potter” book and film series are one of those once-in-a-lifetime cultural phenomena that continue to delight millions of fans around the world—and now audiences will be able to relive the magic through the music that’s been sparking imaginations for years. From the first note, the innovative, colorful music engages and creates a special concert that comes to life with extraordinary music. The dominant theme closely identified with and used in all of the “Harry Potter” films is titled “Hedwig’s Theme,” even though it doesn’t always specifically represent the character, Hedwig, but rather the wider idea of magic and the wizarding world. Of all of the music from the movies, the concert suite for “Hedwig’s Theme” is the most frequently performed by musicians and ensembles. But all of the music performed during “The Magic and Music of Harry Potter” is sure to sound familiar—even to many young ears.