Pacific Symphony to Make its Carnegie Hall Debut for a Special Program Dedicated to one of Today’s Most Fascinating and Pre-Eminent Composers, Philip Glass 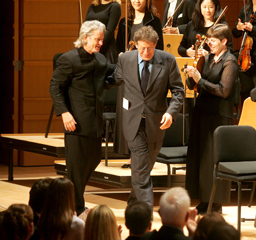 Pacific Symphony, led by Music Director Carl St.Clair, has been invited to perform for the very first time at one of the world’s most prestigious venues, Carnegie Hall in New York City, in honor of one of today’s leading composers, Philip Glass. Joining them will be Pacific Chorale, also appearing at Carnegie Hall for the first time. One of America’s most revered composers, Glass is Carnegie Hall’s 2017-18 composer-in-residence, where he holds the Richard and Barbara Debs Composer’s Chair. With this season-long residency by Glass, Carnegie joined a yearlong celebration of the composer’s 80th birthday, presenting performances that feature his classics and premieres. As part of the residency, orchestras from across the United States were invited to submit programs featuring important works by Glass in illuminating contexts. Pacific Symphony and the Louisiana Philharmonic Orchestra were the two orchestras chosen, in part by Glass himself, to perform during Carnegie’s upcoming season. Both orchestras emerged among competitors with what Carnegie called “very compelling programs.”

“Being invited to Carnegie Hall is a great honor,” says Pacific Symphony’s Music Director Carl St.Clair. “And, being invited to this world-renowned concert hall to celebrate the birthday of my dear friend, Philip Glass, makes our debut there all the more meaningful. Further, to perform in his honor a work that Pacific Symphony commissioned, premiered and recorded, along with celebrating his long relationship with Ravi Shankar with works he co-composed with him, makes the entire occasion powerful.”

“Artistic excellence and innovation are at the core of Pacific Symphony’s identity,” commented Symphony President John Forsyte, “so it is gratifying to have this opportunity to showcase at Carnegie Hall a work commissioned by Pacific Symphony that is emblematic of our strong commitment to new music. It is also rewarding that the Pacific Chorale, a frequent commissioning partner and an important force on the Orange County cultural scene, will join us in presenting the New York premiere of ‘The Passion of Ramakrishna,’ during this special festival celebrating the genius of Philip Glass.”

Pacific Symphony makes this significant debut on Saturday, April 21, 2018, when Glass’ famous collaborations with the Indian sitar master Ravi Shankar will be honored during a program that spotlights “Meetings Along the Edge” from “Passages,” a piece Glass recorded with Shankar, whom Glass first met in India in 1965. The eight-minute movement was composed by Glass on a theme of Shankar in 1990. Also on the program is the 40-minute “Concerto No. 3 for Sitar and Orchestra” by Shankar, which was written on commission from the Orpheus Chamber Orchestra and premiered in 2009 by his daughter, Anoushka Shankar, who will perform with Pacific Symphony at Carnegie Hall.

The final work on the program will be the New York premiere of “The Passion of Ramakrishna”—a work of quiet intensity and unforgettable power—scored for vocal soloists, chorus and large orchestra to celebrate the life of this incredible Hindu holy man. Mixing Eastern and Western traditions, Glass’ heroic musical homage paints an exquisite symphonic and choral picture of India emerging from centuries of foreign domination. The epic, 45-minute piece was commissioned by Pacific Symphony and given its world-premiere on Sept. 16, 2006, as part of the grand opening of the orchestra’s then-new home, the Renée and Henry Segerstrom Concert Hall in Costa Mesa, Calif. Gramophone magazine reviewed the Symphony’s 2012 recording of the work, praising it as Glass’ “most thoughtful and inventive recent piece.”

Local Pacific Symphony enthusiasts will have the opportunity to hear the orchestra perform this concert in Orange County on April 12-14, 2018. Single tickets to the Carnegie Hall performance go on sale August 28 at CarnegieHall.org. In addition, Pacific Symphony will announce a patron trip to cheer on the orchestra in New York later this spring.

“In creating our season-long residency with Philip Glass, we saw a great opportunity to ask orchestras from across the country to suggest programs that put his symphonic works in illuminating context,” says Clive Gillinson, executive and artistic director of Carnegie Hall. “Pacific Symphony’s program stood out as one of the most compelling, and we were further impressed by the orchestra’s strong commitment to performing and recording Philip’s works. We’re delighted to present the orchestra in their Carnegie Hall debut next season and look forward to an evening of great musical discovery.”

Glass, who spent a great deal of time traveling in India during the middle years of his life, says he had long known about the Gospel of Ramakrishna, which he calls “a classic book, written in a beautiful style.” Along with Nadia Boulanger, Glass claims that Ravi Shankar is the most important person with whom he has ever worked. The composer says: “It was my great luck to meet a master of a great tradition of global music. One of Ravi’s great achievements is the way he extrapolates rhythmic structure into the overall structure of a composition. Ravi is a complete master of that.”

This momentous tribute to the 19th-century Indian mystic (who famously said, “Every religion is a path to God”) will feature the Pacific Chorale and guest soloists Elissa Johnston, soprano, as Sarada Devi; Christòpheren Nomura, baritone, as “M”; Donovan Singletary, bass-baritone as Dr. Sarkar; I-Chin Feinblatt as First Devotee and Nicholas Preston as Second Devotee (both Orange County residents and members of Pacific Chorale). Johnston was recently cited by the Chicago Tribune for the “exquisite beauty, sensitivity and precision” of her singing, while Nomura has been hailed as one of classical music’s “rising stars’ by The Wall Street Journal; he returns to the role he sang during Pacific Symphony’s premiere of “The Passion of Ramakrishna” in 2006.

“Philip has played an important role in Pacific Symphony’s life, especially since we opened the Renée and Henry Segerstrom Concert Hall with his ‘Passion of Ramakrishna,’ ” says St.Clair, “and the relationship just grew from there. His musical voice is distinct, unique and reflects the deep spirituality of Philip, the man and the humanitarian.”

In 2011, Glass became the focus of Pacific Symphony’s 11th American Composers Festival (ACF)—“The Passion of Philip Glass”—the first-ever Southern California Philip Glass Festival, presented in partnership with Long Beach Opera. The festival included not only the composer’s music (concert and opera) but accompanying events (films, lectures, discussions), all of which probed deeply into Glass and his music. The unifying theme for ACF that year was the influence that India’s music and philosophy had on Glass. The Festival revisited “The Passion of Ramakrishna” and presented complementary works from Glass’ oeuvre, with the goal of bringing this modern master to the greater attention of music patrons in Southern California.

“I had wanted Philip Glass as our featured composer for ACF in spring 2006,” says St.Clair. “It was the third year ACF looked at the non-western influences on American composers in the 20th-21st centuries and he was thinking of doing a large-scale work based on the life of the Ramakrishna—but there wasn’t enough time for him to complete it. So it premiered for our opening of the hall in September 2006. I have always felt the work deserved to be repeated again in the future.”

There are myriad reasons why Glass is worthy of so much attention, beginning with the fact that he has made a tremendous impact on the American musical vocabulary. He has written in numerous different genres, drawing inspiration from a multitude of sources, while retaining an immediately identifiable style. All of this plays a part in St.Clair’s and Pacific Symphony’s lengthy history with the composer.

“I first met Philip in the early 1980s at the Cabrillo Festival,” recalls St.Clair. “It was Dennis Russell Davies who introduced us.” Glass was the guest composer that summer and St.Clair conducted a couple of his orchestral works at that festival. They enjoyed an immediate and strong personal connection and St.Clair recalls that week with deep fondness. “I am a big, big fan with utmost respect for him as composer and friend.”

It is no wonder that this cultural icon, reaching across generations and genres, even beyond the world of music, has attracted the attention of so many. His wide-ranging collaborations with artists from every discipline—including choreographer Twyla Tharp, poet Allen Ginsberg and filmmaker Martin Scorsese—have fascinated opera, dance, pop and rock audiences for more than half a century. His catalog of visionary works, known for both hypnotic and dramatic structures and shape-shifting motifs, are landmarks of a mid-century compositional movement that pivoted from serialism and atonality toward a more direct and rhythmic style.

Glass was born in 1937 and grew up in Baltimore, Md. He studied at the University of Chicago, The Juilliard School and the Aspen Music Festival and School with Darius Milhaud. He later moved to Europe, where he studied with the legendary pedagogue Boulanger (who also taught Aaron Copland, Virgil Thomson and Leonard Bernstein), returning to New York to work closely with the sitar virtuoso/composer, Shankar, and study with Shankar’s legendary tabla player, Alla Rakha. In 1967, he formed the Philip Glass Ensemble—seven musicians playing keyboards and a variety of woodwinds, amplified and fed through a mixer.

The new musical style evolved by Glass was eventually dubbed “minimalism.” Glass himself never liked the term and preferred to speak of himself as a composer of “music with repetitive structures.” There has been nothing “minimalist” about his musical output. In the past 25 years, Glass has composed more than 20 operas, large and small; 11 symphonies; two piano concertos; concertos for violin, piano, timpani, and saxophone quartet and orchestra; soundtracks to films, ranging from new scores for the stylized classics of Jean Cocteau to Errol Morris’ documentary about former Secretary of Defense Robert McNamara; string quartets; and a growing body of work for solo piano and organ. He has collaborated with Paul Simon, Linda Ronstadt, Yo-Yo Ma and Doris Lessing, among many others. He presents lectures, workshops and solo keyboard performances around the world, and continues to appear regularly with the Philip Glass Ensemble.