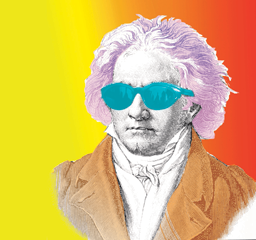 Perhaps the most epic choral work ever composed, Beethoven’s monumental Ninth Symphony, which includes the famous last movement, “Ode to Joy,” has filled concert venues around the world for close to two centuries, yet has never lost its ability to thrill. A musical wonder considered by many to be Beethoven’s greatest work, his massive and majestic Ninth fills Irvine Meadows Amphitheatre with pure radiance during Pacific Symphony’s second concert of Summer Festival 2016. Led by Music Director Carl St.Clair, this crown jewel of the season boasts a huge orchestra, full chorus and a spine-tingling vocal quartet. The heart-welling program also includes a number of other beloved and moving pieces including Aaron Copland’s “Fanfare for the Common Man,” Samuel Barber’s “Adagio for Strings,” John Williams’ “Liberty Fanfare” and his “Hymn to the Fallen” from the film “Saving Private Ryan.”

The concert takes place Saturday, July 23, at 8 p.m. (gates open at 6 p.m. for picnicking), as part of the Symphony’s grand finale season at Irvine Meadows Amphitheatre. Tickets are $25-$108. And new this year: the award-winning caterer 24 carrots is on site to serve up delicious gourmet options for pre-concert dining. For more information or to purchase tickets, call (714) 755-5799 or visit www.PacificSymphony.org.

A poignant experience on many levels, this performance of Beethoven’s Ninth also becomes a beacon of hope for the fight against lung cancer in a second-year partnership between the Symphony and the American Lung Association of California (ALA). Research has shown that music has the power to ease pain and suffering, as well as to heal, making the concert an ideal vehicle for raising awareness of America’s number one cancer killer. Considering that lung cancer causes more deaths of women than any other cancer yet only one percent of women cite the disease as top of mind, lung cancer is an urgent health crisis that needs attention. In response, ALA has created the national movement LUNG FORCE to unite people in the effort to increase advocacy, education and research for this important cause.

For this special event, concertgoers are encouraged to join the Symphony musicians in wearing turquoise to show their support of LUNG FORCE, and to learn more about lung health in the “Music for Hope” passport festival starting at 6 p.m. before the concert. Activities include yoga breathing exercises, pulmonary function tests, the opportunity to test-drive instruments from the brass and woodwind families and more. To learn more about ALA and the LUNG FORCE Walk taking place Nov. 5 at UC Irvine, please call (714) 332-3273 or visit www.lungforce.org.

“We are very excited to continue our partnership with Pacific Symphony in the fight against lung cancer,” says Olivia Diaz-Lapham, president and CEO, American Lung Association in California. “If you can’t breathe, nothing else matters. In that spirit, we thank the Symphony for joining us to support and celebrate lung health.”

“Beethoven’s masterpiece Ninth Symphony is certain to be a highlight of the season,” says Maestro St.Clair. “This is a symphony that can’t be repeated often enough. It will be an electrifying night. No one will leave untouched by this experience, once they hear the unifying message that all mankind must become brothers.”

And Beethoven’s Ninth Symphony must be heard live to be fully experienced. The Ninth’s unprecedented size and complexity, not to mention the introduction of the human voice into a symphony, changed the face of music history forever. The masterpiece became a cultural sensation immediately after its premiere, but when it was first performed in 1824, conducted by Beethoven himself, he heard not a note, having already grown profoundly deaf. Nor did he hear the five standing ovations it received at the conclusion. Also interesting is the stage of his life in which Beethoven found himself when writing it…his last. The words of the iconic fourth movement were taken from a poem written by Friedrich Schiller in 1785 and reflect the composer’s hopes and dreams for a better world and its triumphant affirmation of universal brotherhood.

Designed to uplift hearts and offer inspiration, the concert includes Copland’s iconic “Fanfare for the Common Man,” his most internationally popular work, which was featured on an album by the rock group Emerson, Lake & Palmer. The piece, which is scored for brass ensemble with timpani, bass drum and tam-tam, was the result of a commission in 1942. The work was one of 18 fanfares written by various American composers during the dark days of World War II, all of which were intended to promote feelings of patriotism and national unity. Copland’s contribution has been the only one of the set to find a place in the regular orchestral repertory.

Copland turned to the most overt kind of patriotic fervor in “Fanfare for the Common Man.” The concept behind it was to honor the common man who performed his deeds of heroism not on the battlefield but on the home front. The Fanfare later served as the introduction to the finale of his Third Symphony. While working on his Symphony No. 3 in the years 1944-46, Copland commented that he was “certainly reaching for the grandest gesture.”

Also on the program is another audience favorite that is a mere eight minutes long yet manages to consistently take listeners from the depths of despair to the heights of joy: Barber’s “Adagio for Strings.” This moving work is one of the most popular, frequently programmed and hauntingly melodic American compositions in the standard repertory. Elemental and beautiful, the Adagio has qualities that are rarely found together: a spacious, quintessentially American sound, but also a melancholy, ruminative mood that offers both insight and solace to the listener.

Barber originally composed this work in 1936 as the second movement of his String Quartet Op. 11, and the NBC Symphony Orchestra under Toscanini’s baton premiered it in 1938. Today it is more than just a staple of the orchestral repertory; it is almost always turned to when American orchestras seek a work that provides beauty, comfort and inspiration.

“Hymn to the Fallen,” from the movie, “Saving Private Ryan,” is an astounding piece by John Williams. Despite the movie’s content, it is not dark or dismal, but instead is uplifting and tender. The simple tune carries the weight of all who died in World War II, as Spielberg said in the liner notes for the movie. From the snare solo in the beginning, the theme begins softly, with a beautiful choral part. The music is never too sad or depressing. Even when the tension builds, any emotional reaction comes not from the sadness of the piece, but from its profound beauty.

Williams was commissioned by the Statute of Liberty-Ellis Island Foundation to write a fanfare for the festivities accompanying the centennial of the Statute of Liberty. Prior to the work’s premiere, Williams told the Boston Globe that it is “about five minutes long, and it has a one-minute detachable front-piece that will be the signature music for all of the ABC presentations connected with the Fourth of July. I’ve tried to create a group of American airs and tunes of my own invention that I hope will give some sense of the event and the occasion.” The Boston Pops gave the work’s first public performance on June 4, 1986, under the direction of the composer. A month later, Williams led the Boston Pops Esplanade Orchestra in the work as part of a live national telecast.

Reviewing the Boston performance, music critic Anthony Tommasini wrote that “as fanfares go, [it] is a humdinger. It’s got two great tunes: a brassy and boisterous fanfare riff, all roulades and flourishes and forward motion; and a long-lined tune for hushed-up strings that sounds like lots of others Williams has composed for Hollywood, but still gets you right in the back of the throat.”

Pacific Symphony’s Summer Festival 2016 is made possible by Avenue of the Arts Hotel and media sponsors PBS SoCal, K-Earth 101, KPCC and KUSC.