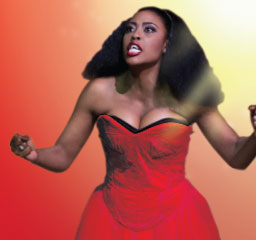 Experience Verdi’s impeccable musical genius at its most voluptuous when Pacific Symphony delivers the concert opera, “Aida, ” recounting the doomed love triangle of an Egyptian princess, a young Nubian slave girl and the soldier they both love! For three grand nights, the orchestra comes out of the pit and onto the stage for this semi-staged presentation of Verdi’s most popular and heartbreaking opera. Set amid the chaos and political upheaval of ancient Egypt, “Aida” unfolds its edge-of-your-seat story with all the dramatic power, glorious writing for the voice and vivid orchestration associated with the composer’s late period. This masterpiece of high emotion, grand tragedy and exquisite music includes some of opera’s most beloved arias and powerful choruses, as well as the stirring “Triumphal March.” Making her North American debut as Aida is the young spinto-soprano Kelebogile Besong, who represented South Africa in the BBC Cardiff Singer of the World competition in 2015. This semi-staged production of “Aida” includes dancing, acting, staging, costumes and props.

With concert opera an annual event for the Symphony, history promises that this production will be highly popular, and like its predecessors, sure to sell out fast. “Aida” takes place Thursday, Feb. 23, Saturday, Feb. 25 and Tuesday, Feb. 28, at 8 p.m., in the Renée and Henry Segerstrom Concert Hall. The lobby will be transformed in ancient Egypt. Tickets are $45-$135; Box Circle, $215. A preview talk with Alan Chapman begins at 7 p.m. For more information or to purchase tickets, call (714) 755-5799 or visit www.PacificSymphony.org.

“There are few operas more grand than last year’s ‘Turandot,’” says Maestro St.Clair, “so the only way to go was to Verdi’s monumental ‘Aida.’ I always want to do big choral operas because including the magnificent Pacific Chorale, which is over 120 singers strong, means our opera performances will be all the more spectacular and memorable.”

“‘Aida’ is a masterpiece—both epic and deeply personal,” says the stage director, Birnbaum. “Although we tend to think of romantic Italian opera as traditional and conventional, Verdi was incredibly innovative. I think a lot of productions of ‘Aida” deal with its epic nature—we think of elephants and giant temples. However, like in all of Verdi’s operas, at ‘Aida’s’ core are beautifully writ individuals with deeply human wants and needs. I think a semi-staged production gives us a unique opportunity to focus on these characters, to tell the story more sparely and more intimately. Needless to say, I am thrilled to be able to direct ‘Aida’ with Pacific Symphony.”

To briefly recap the plot, “Aida” is set in Egypt’s capital city, Memphis, where an Ethiopian princess, Aida, is being held prisoner. To protect herself, Aida has kept her identity a secret, and she soon becomes a slave of the Egyptian King’s daughter, Amneris. Meanwhile, an Egyptian general, Radames, falls secretly in love with her and she with him. But then the Egyptian King appoints Radames supreme commander against Ethiopia, which leaves Aida torn between love for her country and for Radames. The catalyst for turmoil is Amneris, who also loves Radames; the King intends to reward his commander’s military victories by bestowing upon him his daughter and making him his successor. So goes the increasingly entangled drama that is “Aida.”

Making this production particularly special is the South African opera star who will play Aida; Besong is emerging on the international opera stage as a talent of unusually strong stage presence, sensitive musicianship and vocal power. Despite being just 28, Besong has enjoyed successes in the title role of “Aida” at Malmö Opera House in Sweden and at Aalto Theater in Essen, Germany. She is the proud recipient of the 2012 Standard Bank Young Artist Award in Music and in 2013 she was awarded Africa’s Most Influential Woman in Business & Government (Arts). Besong was a finalist of the 32nd Belvedere Singing Competition 2013, held at the Dutch National Opera in Amsterdam.

“Without a doubt, Verdi’s operas are the most powerful I have ever watched, felt, sung and emotionally connected to—they really speak to me,” says Besong, who adds that “Aida” is one of her favorite operas because she strongly relates to the story. “‘Aida’ is captured as a slave, and I come from South Africa, which is a country that has experienced apartheid. I see it as almost the same thing as slavery.

“Verdi’s ‘Aida’ is a combination of such a powerful story and strong music, yet it’s soulful; everything falls into place without one trying too hard,” she says. “While this is a big opera, it is still an intimate story about love. All cast members and the orchestra are equally important simply because without them the opera would be incomplete. It’s all teamwork. This will definitely be an exciting experience with the orchestra and chorus!”

The Symphony’s opera initiative, “Symphonic Voices,” was first inspired by St.Clair’s career as an opera conductor in Europe and also by a desire to fill the hole left by the closure of Opera Pacific. As the former general music director and chief conductor of the German National Theater and Staatskapelle (GNTS) in Weimar, Germany, St.Clair led Wagner’s “Ring Cycle” to great critical acclaim. During his tenure at the Komische Oper Berlin, he led acclaimed productions of not only “La Traviata” but also the world premiere of Christian Jost’s “Hamlet” and the heralded production of “Lear” by Aribert Reimann, one of Germany’s most distinguished composers. For Pacific Symphony, St.Clair has now led “La Bohème,” “La Traviata,” “Carmen,” “Tosca” and “Turandot”—making “Aida” the sixth in a series of highly successful concert operas.

“Aida” is sponsored by Catherine Emmi and Cameron Emmi, and Opera Focus. The concert opera is part of Pacific Symphony’s Classical Series, which is made possible by the Hal and Jeanette Segerstrom Family Foundation, with additional support from the Westin South Coast Plaza, KUSC and PBS SoCal.