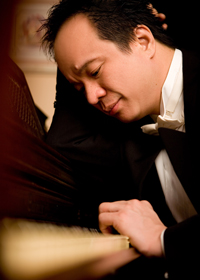 A shining jewel among the most popular piano repertoire, Beethoven’s “Emperor” concerto bursts to life at Pacific Symphony’s Summer Festival in the hands of internationally renowned pianist Rueibin Chen. The Boston Globe has said: “He plays with the white-hot energy, steel-fingered power and athletic virtuosity… Chen showed that he can play with delicacy and imagination.” Full of romanticism, majesty and beauty, Beethoven’s Piano Concerto No. 5 is the last piece the composer wrote in concerto form and has remained the favorite among his fans. Led by Assistant Conductor Alejandro Gutiérrez in his Summer Festival debut, this concert also marks the maestro’s final performance with the Symphony. This wonderful evening of music under the stars opens with Verdi’s stormy and colorful “La Forza Del Destino” and concludes with Rimsky-Korsakov’s “Scheherazade,” a musical rendition of “Arabian Nights.”

Taking place Saturday, July 25, at Irvine Meadows Amphitheatre (formerly Verizon Wireless Amphitheater), the concert begins at 8 p.m. and audience members are welcome to picnic on the grounds starting at 6 p.m. Tickets range from $25-$107 and kids are half price in most sections. For more information or to purchase tickets, call (714) 755-5799 or visit www.PacificSymphony.org.

Though not penned by the composer himself, the nickname of Beethoven’s popular Piano Concerto No. 5, “Emperor,” is apt for the famous work, as it presents even its smallest intricacies with the utmost nobility and grandeur. This piece is a staple among solo pianists everywhere, and the multitude of ways in which it can be played—from soft and poetic to powerful and grandiose—are innumerable. The elegant work displays traditional hallmarks of Beethoven’s music such as the repetitive finale with the soloists fingers flying over the piano keys, the classic sonata form, and a combination of two contrasting themes to create one strong, cohesive whole. This piece always dazzles and impresses an audience.

“Through the ‘Emperor’ I would like to express Beethoven’s attitude toward life,” says the pianist, Chen. “He had a rough life, but he faced obstacles with a positive attitude. He composed so much beautiful music, regardless of life’s challenges… I very much look forward to performing this piece with Pacific Symphony. It is a first-class orchestra with wonderful musicians from all over the world. Also, there are many music-loving families of Asian descent in Orange County. The children of these families all take music lessons. It will be a great opportunity to communicate with them via Beethoven’s music.”

Born in Taiwan, Chen was discovered at age 13 through a national talent search and sent to Austria to study at the Vienna Conservatory under the late legendary Russian pianist Lazar Berman. Since then, he has won 18 medals, including five gold medals earned before the age of 20. Recently, Chen was the opening soloist for the 2010 World Expo in China and has been acclaimed for his masterful performance of Rachmaninoff’s complete piano concertos in two consecutive nights at Taiwan’s National Concert Hall, garnering significant critical acclaim. In addition to his masterful artistry, Chen’s humble background and hardship growing up alone in Europe have inspired many young pianists, both in Asia and abroad. 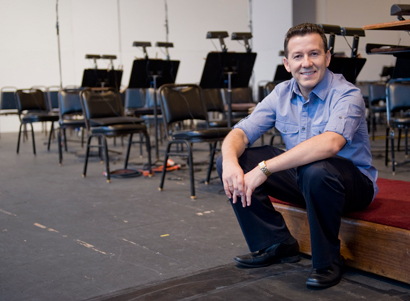 Also part of the evening is Nikolai Rimsky-Korsakov’s 1888 masterpiece, “Scheherazade.” This work, based on the famous and exciting tale of “One Thousand and One Nights” from the Middle East and South Asia, depicts the beautiful Arabic consort Scheherazade’s storytelling as she tries to postpone her death at the hands of King Shahryar. The king was known to behead his lovers after a single night, so in order to prevent this horror from happening to her, the young woman weaved 1,001 tales to keep Shahryar interested and under her spell. Scheherazade’s voice is heard in the solo violin part played by the concertmaster. Proving that music holds the power to evoke strong imagery within the mind, Rimsky-Korsakov’s striking and memorable musical themes easily transport the listener to exotic lands.

The program also includes one of Maestro Gutiérrez’s favorite pieces, Verdi’s Overture to “La Forza del Destino.” Giuseppe Verdi, an Italian composer of the 19th century, wrote a tremendous number of operas, many of which are still performed today, such as “La Traviata,” “Rigoletto” and “Aida.” The composer even wrote “Messa da Requiem,” showcasing his noteworthy compositional skill outside of the realm of opera. The opening of the opera “La Forza del Destino,” written in 1862, serves as an introduction to the famed tale of love and adventure gone awry.

As Maestro Gutiérrez states, the classic work features “strong character, beautiful melodies, great contrasts and the wonderful use of the fate motif within the piece.”

This concert bids a fond farewell to Gutiérrez, who for three years has led the Symphony’s Family Musical Mornings and Class Act Youth Concerts, as well as serving as music director of Pacific Symphony Youth Orchestra (PSYO). The popular conductor leaves the Symphony to return to Costa Rica.

“The past three years with this wonderful institution have been full of joy and excitement, and my family and I feel blessed for the warmth and welcoming we received from this great community of OC. We go back to our home country of Costa Rica with our heart full of new friends, amazing memories and with the conviction that my artistic paths will cross again with this great orchestra in the future.”