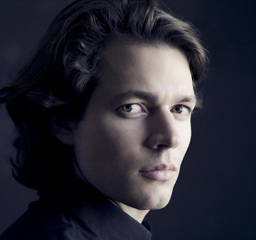 Pacific Symphony and Music Director Carl St.Clair explore great masterworks by Robert Schumann and Johannes Brahms, two Romantic-era composers who were united by their friendship, passion for music and love of the same woman: Clara Wieck. A virtuosic pianist herself, Clara’s influence prevails throughout the music of both composers. Shortly after marrying Schumann, she encouraged her new husband (although they had been friends for years) to write a piano concerto for her to premiere. The result has become one of the most popular piano concertos of the repertoire. Interpreting its unpredictable moods and colorful emotions for the Symphony’s concert is French pianist David Fray. Son-in-law of the great conductor Riccardo Muti, Fray has gained a reputation for his individualistic, expressive and meditative performances. “David Fray is alive to the way the music moves at every point and skilled at evoking worlds of sound beyond the piano,” wrote Gramophone Online.

After intermission, Maestro St.Clair leads the orchestra in Brahms’ Symphony No. 1. Shortly after a 20-year-old Brahms arrived at the Schumann household and impressed both Clara and Robert with his music, Schumann published an article proclaiming him to be the next Beethoven. It was in part this pressure to compose “Beethoven’s 10th” that it took Brahms more than two decades to complete his First Symphony. A rich, complex work all its own, critics deemed it well worth the wait.

The Symphony’s concert, “Fray Plays Schumann,” takes place Thursday through Saturday, October 22-24, at 8 p.m. in the Renée and Henry Segerstrom Concert Hall as part of the 2015-16 Hal and Jeanette Segerstrom Family Foundation Classical Series. Tickets range from $25-$110. A preview talk with Alan Chapman begins at 7 p.m. For more information or to purchase tickets, please call (714) 755-5799 or visit www.PacificSymphony.org.

“The many connections between Johannes, Robert and Clara—friendship, affection and love—are well documented,” says St.Clair. “It has made for a heartwarming story of great artists fated together sharing their love and music with one another. The trio of works on this evening’s program have many links between the three friends, and I’m sure we will all experience the love and affection they had for one another through the music.”

Opening the program with beautiful, songlike melodies is an orchestral reimagining of Brahms’ Intermezzo Op. 118, No. 2 by Chinese-American composer Bright Sheng, titled “Black Swan.” As one of the foremost composers of our time, Sheng’s work is performed regularly throughout North America, Europe and Asia. The MacArthur Foundation described him as “an innovative composer who merges diverse musical customs in works that transcend conventional aesthetic boundaries.”

“My dear friend Bright Sheng and I met through our mentor, Leonard Bernstein,” says St.Clair. “Like Mr. B., he is multi-talented as a composer, pianist, conductor and chamber musician. His orchestration of Brahms’ Intermezzo sets this jewel in the array of orchestral colors reminiscent of Johannes Brahms himself.”

The original Intermezzo was part of Brahms’ set of Six Pieces for Piano Op. 118, completed in 1893 and dedicated to Clara Schumann, thus beginning the story of love and friendship that is woven throughout the music on this program.

Robert Schumann and Clara Wieck first became acquainted while Schumann was studying with Clara’s father, the revered piano pedagogue, Friedrich Wieck. At the time, Schumann was 18 and Clara was 9, already a prodigy on the piano. As time passed, their friendship turned into a romantic love and they eventually married in 1840. Ambitious for her husband’s career as well as her own, Clara urged Schumann to write “a big bravura piece” for her to play as piano soloist with orchestra. Distraught over the composition, he put his attention on something else, a Fantasy for piano and orchestra, which Clara eventually convinced him to turn into a concerto by adding two additional movements. Clara debuted the piece at a New Year’s Day concert in Leipzig in 1846. Known for his mercurial style, Schumann sweeps the listener from mood to mood. The orchestra opens the work with a striking chord that contrasts to a wistful oboe line in the first movement. The second movement contains a fragile melody sung between the strings, and the final movement ends with a thundering timpani roll and echoing final chord.

The evening’s guest pianist, Fray, rose to the world’s attention at the age of 23 when he won second prize at the Montreal International Music Competition in 2004, earning him a recording contract. Since then, he’s worked with distinguished conductors including Christoph Eschenbach, Kurt Masur, Esa-Pekka Salonen and Jaap van Zweden. In 2008, he married actress Chiara Muti, daughter of conductor Riccardo Muti, with whom he has also performed. In 2009, Fray made his U.S. debut with the Cleveland Orchestra and has performed throughout the country with the Boston Symphony, San Francisco Symphony, New York Philharmonic, Chicago Symphony and Los Angeles Philharmonic. A few of his European orchestral highlights include performances with the Royal Concertgebouw, London Philharmonic, Orchestre de Paris and Orchestra del Teatro alla Scala. He started taking piano lessons at the age of 4, and furthered his studies with Jacques Rouvier at the National Superior Conservatory of Music in Paris, where he currently resides.

The program concludes with Brahms’ Symphony No. 1, which received its premiere in the duchy of Baden in southwestern Germany—an unusual choice for such an occasion, perhaps to lower the stakes as opposed to debuting in one of the musical capitals such as Vienna or Berlin. At the premiere, the Symphony was received as an unqualified success, confirming Brahms total mastery of the symphonic form.

“Brahms was seen as the successor to the great composers who proceeded him—Beethoven, Schubert and Schumann,” explains St.Clair. “But, Brahms must have felt the mighty shadow of Beethoven over his shoulders. From beginning sketches to completion, it took him more than 20 years before his Symphony No. 1 was ready for performance.”

Although Schumann passed away just a few years after meeting Brahms and declaring him a musical savior, Brahms and Clara continued to develop mutual love and admiration for one another that lasted throughout their remaining lifetimes.

St.Clair gives one example of how their relationship helped shape his music: “In the First Symphony’s final movement, we hear the distant calls of the ‘alp horn.’ Some eight years earlier, Brahms had sketched the notes of the horn in a postcard to his dear friend, Clara, with the words, ‘Thus blew the shepherd’s horn today.’ ”