“Come Together” for a tribute to the iconic group that changed the face of music forever, when Pacific Symphony welcomes “Classical Mystery Tour” and music of The Beatles 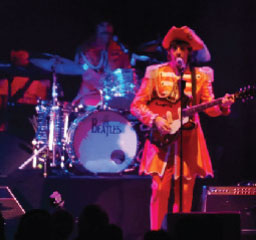 Pop music’s greatest phenomenon—The Beatles—return to the stage (at least in spirit) when Pacific Symphony is joined by Classical Mystery Tour, one of the best Beatles tribute bands today. The concert, the last of the Symphony’s 2015-16 Pops season, fittingly celebrates the 50th anniversary of The Beatles final live concert in 1966 with an evening dedicated to the Beatles’ songbook. The iconic mop-haired singers, whose music has been a world-wide cultural staple since their legendary appearance on “The Ed Sullivan Show,” is the inspiration for Classical Mystery Tour, whose members so embody the rock icons in style, sound and appearance, that it’s easy to forget they aren’t the real thing. The band joins the orchestra for an incredibly authentic rock-and-roll experience, enhanced by the backing of the full orchestra. The audience can expect to revisit such indelible hits as “Yesterday,” “Come Together,” “Sergeant Pepper’s Lonely Hearts Club Band,” “Strawberry Fields Forever,” “Magical Mystery Tour” and many more.

Led by Guest Conductor Albert-George Schram (who also led Pacific Symphony for a program featuring Chris Botti in May), the concert’s first half features the orchestra performing selections from the musical, “My Fair Lady” (Frederick Loewe); Max Steiner’s theme from “A Summer Place”; Leonard Bernstein’s “Mambo” from “West Side Story”; “Protest and Hope”; Ernest Gold’s “Exodus”’ and Elmer Bernstein’s “Magnificent Seven.” The second half features all-Beatles music with songs written by John Lennon, Paul McCartney or George Harrison. The concert takes place on Friday and Saturday, June 17-18, at 8 p.m., in the Renée and Henry Segerstrom Concert Hall. Tickets are $40-165. For more information or to purchase tickets call (714) 755-5799 or visit www.PacificSymphony.org.

“I’ve worked with these dudes before—and they’re really good!” says Maestro Schram. “They really bring to life the many, many musical gems that The Beatles wrote. And who doesn’t love that! Of course, the first half of the concert is also glorious, because Pacific Symphony and I get to strut our stuff! I picked some great music from the ‘70s to coincide with the time The Beatles were in their heyday. It’s going to be a great time!”

Presented by Jim Owen, who was born and raised in Orange County’s Huntington Beach, Classical Mystery Tour features original members of the Broadway show “Beatlemania,” including Owen as John Lennon on rhythm guitar, piano and vocals; Tony Kishman as Paul McCartney on bass guitar, piano and vocals; David John as George Harrison on lead guitar and vocals; and Chris Camilleri as Ringo Starr on drums and vocals. The band creates an exciting live Beatles concert experience for fans of all generations. Not only does the group look and sound just like The Beatles, but they also take Beatlemania to the next level, performing the songs just as they were first written—with a full orchestra.

Since its initial show at the Orange County Performing Arts Center in 1996, Classical Mystery Tour has performed with more than 100 orchestras across the United States and around the world to wide acclaim. They were last heard with Pacific Symphony in the concert hall in May 2009, and before that, at Verizon Wireless Amphitheater in Irvine during the Symphony’s Summer Festival 2006. Both shows drew large, enthusiastic crowds.

“We really make an effort to sound exactly like the originals,” says Owen, who was 8 years old when he first heard The Beatles. His first professional performance as a Beatles’ tribute artist was at 16, and at 18, he began touring internationally with various Beatles tribute productions. He then went on to found Classical Mystery Tour. “The orchestral score is exact, right down to every note and instrument that was on the original recording. On ‘Got to Get You into My Life,’ we have two tenor saxes and three trumpets… that’s what it was written for, and that’s what we use.”

Courtesy of Pacific Symphony, “Penny Lane” includes a live trumpet section, “Yesterday” is enhanced by acoustic guitar and string quartet, and the full orchestra comes together with the band for “I Am the Walrus.”

“And on ‘A Day in the Life,’ that final big orchestra crescendo sounds amazing when it’s played live,” Owen says. “It’s always been our goal to play Beatles’ music as closely to the way they did it, because, really, they did it the best. And that’s what makes it fun—when you can sound like they do. There’s really no point in writing your own arrangement or making an arrangement of a song that didn’t originally have an orchestra in it. So the fun is to take the songs like ‘I Am the Walrus’ piece by piece and make it sound like the original.

“We have some real show-stopping numbers,” he continues. “I wish I could actually be in the audience to see and hear this show, because the power of the emotional and nostalgic connection this music has with audiences is hard to put into words.”

The Symphony’s Pops series receives support from The Avenue of the Arts Hotel, K-Earth 101 and PBS SoCal.