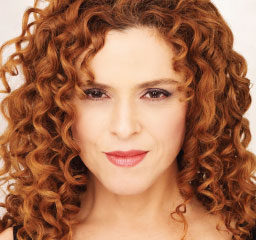 Grammy-, Golden Globe- Drama Desk- and three-time Tony Award-winning actress and singer Bernadette Peters—known for her raw talent and ability to knock the socks off an audience with her glorious voice—joins Pacific Symphony just in time for Valentine’s Day weekend! The ageless Peters, who boasts a decades-long successful career on the Broadway, film and television stage, recently starred in the critically acclaimed Broadway production of “Follies” after a highly successful run at the Kennedy Center, and can be seen in the Golden-Globe winning TV series, “Mozart in the Jungle.” Recent hit performances (backed by orchestras) have included Peters turning up the heat for Peggy Lee’s “Fever”; Rodgers and Hammerstein’s “There is Nothin’ Like a Dame” (from “South Pacific”); “Children Will Listen” and “No One is Alone” (from “Into the Woods”); “In Buddy’s Eyes” and “Losing My Mind” (from her turn as Sally Durant Plummer in the 2011 revival of “Follies”); and “Let Me Entertain You” (from the Grammy Award-winning Broadway cast album “Gypsy”), among many, many others.

“As an actress, singer, comedienne and all-round warming presence, Bernadette Peters has no peer in the musical theater right now.”—Frank Rich, The New York Times

Peters and her instantly recognizable voice join Pacific Symphony, led by Principal Pops Conductor Richard Kaufman, on Friday-Saturday, Feb. 12-13, at 8 p.m., in the Renée and Henry Segerstrom Concert Hall. Tickets are $45-$200. For more information or to purchase tickets call (714) 755-5799 or visit www.PacificSymphony.org.

“Valentine’s weekend is a time for romance!” enthuses Maestro Kaufman. “While I have never had the opportunity to work with Bernadette before now, I have admired her career for many years. She is the consummate performer, whether in film, television or on the stage.

“I’m excited about our Pops season, not only because it’s a landmark year for me with Pacific Symphony and we’ve programmed extraordinary performers like Bernadette, but especially because I get to spend more cherished time with our amazing musicians and with our extraordinary audiences,” continues Kaufman, who is celebrating his 25th anniversary with the Symphony all season long.

The first half of the concert features Mendelssohn’s “Wedding March” (from “A Midsummer Night’s Dream”), John Barry’s “Flying Over Africa” (from the film, “Out of Africa”), Max Steiner’s “Three Dances (from “Gone with the Wind”), John Williams’ “If We Were In Love” (from “Yes, Giorgio”) and Marc Shaiman’s “Tango” (from “Addams Family Values”).

Or, as Kaufman describes it: “The music on the first half tells of romance in exciting and unusual settings: We’ll walk down the aisle to the legendary ‘Wedding March’ of Mendelssohn; sail over the plains of Africa with Robert Redford and Meryl Streep; dance the night away with Rhett and Scarlett; float over the wine country with Pavarotti; and tango with none other than the Addams Family. Romance doesn’t get any better than that!”

Peters, who has dazzled audiences and critics with her performances on stage and television, in concert and on recordings, takes the spotlight for the second half. Her stunning career led to her Broadway role in the critically acclaimed production of “Follies,” after a highly successful run at the Kennedy Center. Prior to that, she starred in the Tony Award-winning masterpiece, “A Little Night Music” opposite Elaine Stritch. She recently received her third Tony, The Isabelle Stevenson Award, which acknowledges an individual from the theater community who has made a substantial contribution of time and effort on behalf of one or more humanitarian, social service or charitable organizations. She devotes her time and talents to numerous events that benefit Broadway Cares/Equity Fights AIDS, in addition to her “pet project” Broadway Barks!

In 2003, Peters received her seventh Tony Award nomination for her electrifying portrayal of Momma Rose in Sam Mendes’ record-breaking Broadway revival of “Gypsy,” and her brilliant performance was captured on the Grammy award-winning cast recording. “Bernadette Peters is a revelation!” The New York Times declared of her star turn in the show. Peters’ Angel Records CD, “Sondheim, Etc., Etc.: Bernadette Peters Live at Carnegie Hall (The Rest of It),” features her historic 1996 solo debut at Carnegie Hall. The concert was a benefit for Gay Men’s Health Crisis. This performance was repeated in “Bernadette Peters in Concert,” her London solo debut at Royal Festival Hall, which later was telecast on PBS and is available on DVD.

Peters received both the Tony Award and Drama Desk Award for her critically acclaimed performance in Andrew Lloyd Webber’s hit musical “Song and Dance.” In June 1999, she earned her second Tony Award, her third Drama Desk Award and an Outer Critics Circle Award for her portrayal of Annie Oakley in one of Broadway’s most popular musicals, the Tony Award-winning revival of “Annie Get Your Gun.” Peters also received Tony nominations for her work in the 1992 musical, “The Goodbye Girl”; Stephen Sondheim’s Pulitzer Prize-winning musical “Sunday in the Park with George”; the Jerry Herman/Gower Champion ode to the movies, “Mack and Mabel”; and the Leonard Bernstein/Comden and Green musical “On the Town.” Additionally, Peters earned a Drama Desk nomination for her portrayal of the Witch in Sondheim’s “Into the Woods.”

While Peters is best known for her work in the theater, she also boasts an impressive list of television credits including her recent guest appearance on NBC’s series SMASH. A performer of amazing versatility, Peters has lit up the silver screen in 17 films throughout her distinguished career. She received a Golden Globe Award for her performance in “Pennies from Heaven.”